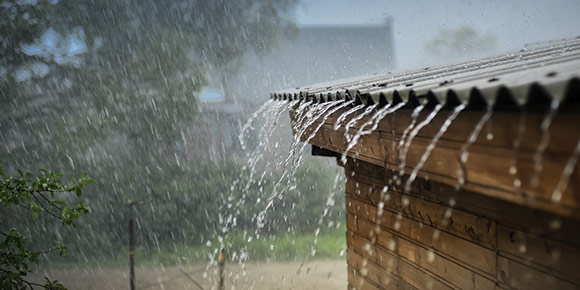 Minimize the likelihood of leaks when deciding on roof type

The root purpose of every dwelling (one that dates back millennia) is to provide shelter from the elements. Hence, an architect’s most fundamental charge is to design a weathertight building.

Unhappily, it doesn’t always work out that way. One of the most common complaints I hear is, “why can’t architects design homes that don’t leak?”

The embarrassing fact is that leaky roofs are endemic to architecture, whether modern or traditional, and the caliber of the architect makes little difference. The occupants of Frank Lloyd Wright’s most celebrated houses have been obliged to drag out buckets, bowls, and soup cans in many a rainstorm. Or as a colleague of mine once put it, “They don’t call it ‘falling water’ for nothing.”

For their part, architects are notoriously adept at brushing off the leak problem. Wright once received a call from an irate client who complained that the roof was leaking all over her dinner guests.

“Tell him to move his chair,” he responded. To the complaint of another waterlogged client, he calmly declared, “If it didn’t leak, it wouldn’t be a roof.”

At least Wright fessed up to these shortcomings, however nonchalantly. The same can’t be said for the famed International Style architect Le Corbusier. Early in his career, he designed a building with a conventional pitched roof. At the first snowfall, it leaked like a sieve — due, it seems, to his own inexperience. In a classic piece of Modernist logic, however, Corbusier concluded that the whole concept of pitched roofs must be flawed, and thereafter espoused flat roofs instead.

Given that architects have such a hard time designing watertight roofs, what chance does a layperson have? You’d be surprised. Here are a few simple, common-sense suggestions that can help minimize the likelihood of leaks:

• Keep the roof design as simple as possible. Leaks seldom occur out in the middle of a roof’s flat surfaces or “field,” in roofing parlance. Rather, they tend to develop in the many nooks and crannies formed where roof planes intersect, or where roofs abut walls. Hence, the simpler the design, the fewer the intersections, the lesser the likelihood of leaks.

• Be especially wary of those craggy alpine roofscapes favoured by current architectural fashion. All those cute little peaks and dormers can become a major leakage headache a few years down the road.

• Minimize “penetrations.” In roof-speak, this term refers to pipes, vents, chimneys, skylights, and any other openings that interrupt the roof’s membrane. Like intersections, they’re far more likely to develop leaks than the field of the roof. Minimize the number of vents and flues penetrating the roof surface, and use a few large skylights rather than a lot of little ones. And don’t locate skylights in roof valleys, where it’s difficult to seal or “flash” them properly.

• Avoid built-up “flat” roofs whenever possible. Granted, built-up roofs are cheap, easy to construct, and great for covering oddly-shaped floor plans. However, without conscientious maintenance, which they seldom get, built-up roofs simply won’t stay watertight. A half-century of painful experience has borne this fact out, suggesting that our pitch-roof loving forebears were probably right after all.