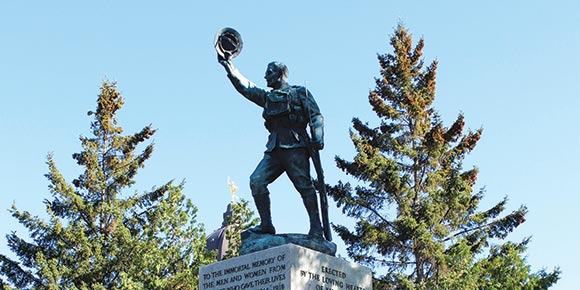 On Sunday, thousands of Manitobans will gather to remember those who gave their lives in service to our country. This year will be especially poignant as it also marks the 100th anniversary of the end of the First World War, the supposed “war to end all wars”.

There are hundreds of war memorials around the province of all shapes and sizes. Here are the stories behind three of them with unique features that make them worth a visit.

At the northwest corner of the Legislature grounds is a memorial that contains something normally found only on memorials in smaller communities: the names of every resident of Winnipeg who died in the First World War.

The project was launched in the fall of 1920 by the Winnipeg Soldier’s Relatives’ Memorial Association which raised the $25,000 required for the memorial.

Their first task was to compile the vast list of the names, which took about a year to do. They used archived daily casualty lists, hired a researcher in Ottawa to comb through individual service files, and held phone-in and mail-in blitzes to ensure that nobody was missed.

The artist was Marguerite Taylor. Born and trained in Paris, her sculptures can be found in cities around the world. In 1904, she moved to Winnipeg after marrying a local businessman. Another local work by Taylor is the Peguis Monument at Kildonan Park.

Taylor was aware that the statue was for the parents, widows and children of those who died and wanted to avoid a sorrowful image. She chose instead to portray a smiling soldier ready to toss his helmet in the air in joy after hearing that the war was over.

The statue was cast in London in January 1923 and the bronze tablets containing the 1,658 names were produced by Henry Birks and Sons in Montreal.

The unveiling took place on May 13, 1923, Decoration Day, and for decades after the memorial was the site of an annual soldiers’ relative’s ceremony and countless smaller events hosted by families. As time passed and new wars came and went, the focus on this memorial waned and formal ceremonies ended in the mid-1950s.

One of the largest war memorials outside of Winnipeg is in the heart of Stonewall.

In 1920, the Stonewall and Rockwood District Returned Soldiers Association created a memorial committee with representatives from the municipalities of Stonewall, Teulon and Rockwood which shared the cost of the project.

The first item on the committee’s agenda was to find a suitable location. They settled on a two-block lot across from the school and, thanks to $500 donations from local businessmen S. J. Jackson and A. J. Lobb, they were able to acquire the land and build a park.

The committee then hired Gilbert Parfitt to design the memorial. The British-trained architect practiced in Winnipeg from 1912 to 1963 and was responsible for dozens of schools, churches and residential buildings around the city. Years later, he would design Winnipeg’s cenotaph on Memorial Boulevard.

Stonewall’s memorial is made of Tyndall stone with a local stone base and is surrounded by concrete steps. Each of the four sides of the column contains a plaque with the names of the 102 men from the region who gave their lives.

Unique to this memorial is that it has a built-in fountain. Water is fed through an electronic pump and pours from four lion heads into basins below.

On October 7, 1922, Governor General Lord Byng and Lady Byng came to Stonewall to unveil the memorial. Thousands of people from the municipality came to witness the ceremony.

Byng was for a time the head of the Canadian Army on the Western front, most notably during the Battle of Vimy Ridge. Before the Stonewall ceremony began, he made a point of stopping to talk individually to each of the 100 veterans who made up the honour guard.

The Stonewall War Memorial has since been rededicated to include soldiers from World War II and Korea.

It wasn’t just veterans’ groups and municipalities that erected war monuments after the First World War. Many companies did as well.

The Canadian Pacific Railway commissioned three “Winged Angel” statues from Montreal sculptor Coeur de Lion MacCarthy to commemorate the 1,116 employees it lost in the First World War. The figures represent the spirit of a departed Canadian soldier being carried off to eternal life by an angel of victory.

The three monuments were unveiled simultaneously in Winnipeg, Montreal and Vancouver on April 28, 1922. The company’s offices closed for the afternoon and around 1,000 local employees attended the Winnipeg event. There was also a large contingent of family members of those who died.

Winnipeg’s Winged Angel has had several homes. It was first unveiled in a small park across from the CPR passenger depot on Higgins Avenue. In 1990, it was moved to a triangle of land adjacent to what was then the Canadian Pacific office building on Henry Street at Disraeli Freeway. It was relocated to its current home on the front lawn of Deer Lodge Centre, the city’s main veterans’ hospital, in 2003.

Winged Angel has been rededicated to commemorate CPR employees killed in both World Wars and Korea.