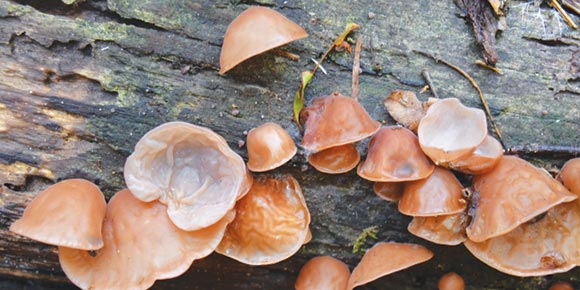 Eating ears — tree ears, that is

At this time of year, as the leaves fall, we notice all the warts and wounds in our trees. What are those strange, jelly-like growths on older trees?

They could be tree ears, ear-shaped fungus that grow on dead or dying wood and favours elder wood.

Their botanical name, Auricularia aricula-judae (Auricularia meaning ear in Latin), has stirred debate because the common name was corrupted to “Jew’s ear”. Some felt this cast a slur upon the religion. In fact, it probably stems from the legend that, when Judas Iscariot hanged himself from an elder tree, his spirit returned and all that remained when it left was Judas’ ears. So this fungus was named Auricularia aricula-judae. Some think it is enough to call it Auricularia auricula – or ear ear.

In spite of the damage done to the throat of Judas, tree ear has been used medicinally for centuries as a cure for sore throat and for quinsy (an infection of the tonsils). One legend has it that it was also used to treat strangulation, but this may have been a tongue-in-cheek reference to its namesake.

There are several Auricularia, but they are all very similar.

A related tree ear, Auricularia polytricha, is a delicacy in China, where it has been cultivated for thousands of years and is known as cloud ear. In Japan, it is called “rough-hair-tree-jellyfish”. It can be grown on sawdust or other media.

Eating tree ears have been likened by westerners to “eating India rubber with bones in it”. Others, kinder in their descriptions, say it is crisp and crunchy. Mild in flavour, it readily borrows the essence of whatever is cooked with it. If you have eaten the spicy cuisine of Szechwan, you have probably eaten tree ear without knowing what it was.  It’s that black gelatinous stuff in spicy dishes.

You will find tree ears growing in happily family-like clusters (gregarious) or all alone in a tuft (caespitose). Tree ears are dried for sale and are easily reconstituted by soaking them in water for about half an hour, which causes them to billow into their natural form. The dried fungus is also ground into a powder that is used to thicken soups. Each tiny particle hydrates individually adding an interesting texture to soups. You will often find them in hot and sour soup.

Tree ears have been studied for their anti-tumour properties. They reduce blood sugar, are an-anti-coagulant and lower cholesterol.

Tree ears may not be everybody’s idea of delicious, but they could be a lifesaver if you were stuck in the woods (and had a match – they should be cooked because they don’t taste very good raw). One hundred grams (3.5 ounces) contain 9.2 grams of protein, 65 grams of carbohydrate, traces of calcium, iron and phosphorus, and all in a mere 284 calories. If you do get stuck in the woods with a match, the fresh fungus should not be fried. It will jump right out of the pan!

Dorothy Dobbie is the owner of Manitoba Gardener magazine. She broadcasts a weekly gardening show on CJNU 93.7 FM at 8:00 on Sunday mornings. For a subscription to Manitoba Gardner call 204-940-2700 or go to localgardener.net. Also on local newsstands.