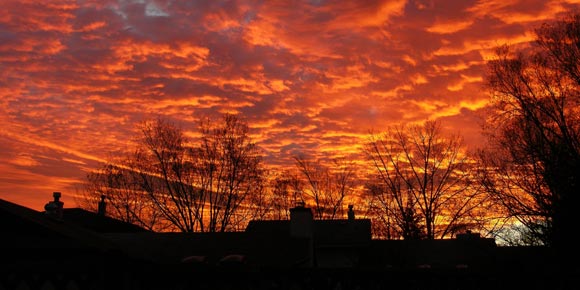 Colours from a sunset or sunrise always a stirring sight

This is the time of the year for magnificent sunsets. But is something real happening or is it all just an illusion?

The sky may turn pink or orange or shades of lavender as the sun slips blow the horizon. It’s a stirring sight and we rush for our cameras or simply marvel at nature without giving the cause much thought.

But why does this happen and why does the sky look blue the rest of the time? The fact is that the sky, like the feathers of a blue jay, is not blue at all.  The eye only perceives the sky as blue even though sunlight is white. This is due to “Rayleigh scattering” which causes diffusion of the various wave lengths in the light so that the shorter blue light waves are more scattered high in the sky than the longer red waves.

At sunrise or sunset, however, the light comes at us from a different angle. As sun gets closer to the horizon, the atmosphere bends the sunlight down toward the surface of the earth lending us an extended view of its light. Most of the blue and green light is scattered up so we see the longer red waves on the horizon. The usually brighter colours we see at sunset are due to the buildup of dust or smoke and water vapour in the atmosphere in evening.

Light, scattered off ice crystals or other particles in the air, is responsible for halo effects, sun dogs and coronas.

Most of us are asleep or too busy to look when the sun rises. Just as we see the sun set even after it has dipped below the horizon, we see the sun rise before it actually reaches its full position above the horizon. Once again, refraction is the cause. Near the poles, the sunrise seems to take longer due to the shallow angle at which the sun crosses the horizon. In addition, cold air is denser than warm air and so has a greater refraction index.

The earth travels around the sun in an elliptical path that describes a slender figure eight. Scientists and others have used carefully staged photographs to show how this happens. In January, the earth is closest to the sun, kissing the earth, but its warmth is not felt in the northern hemisphere because the northern face of the earth is turned away. Later, in July, when the sun is farthest away from the earth, earth’s northern hemisphere is pointed in the sun’s direction and we have summer.

In mid-January, the days are about 9.5 hours long in Toronto; almost 9 hours in Winnipeg; and 8.75 hours long in Calgary. Churchill, Manitoba, on the other hand, is getting only 7.5 hours of sunlight at this time of year, while down south in Miami, the sun is out for 10 hours and 50 minutes, rising at 7, but setting early at 6!

The stars sometimes appear to scintillate, but in reality they are rather cold and austere. It is our viewing point that makes them to appear to twinkle. Small fluctuations in the density of earth’s atmosphere cause this illusion. Scintillation is more likely to be visible closer to the horizon than directly overhead.

Florescent lights emit full spectrum light and have long been used for growing plants. Today, compact florescent light bulbs (CFL bulbs) can be used to promote growth in small flowering plants such as African violets. The closer the plant to the light bulb, the more efficient it will be.

This is a complex subject that I will talk more about later in the year.

Dorothy Dobbie is the publisher of Manitoba Gardener magazine and the weekly E-newsletter, 10 Neat Things. She produces a weekly garden show on CJNU 93.7 FM every Sunday at 8:00 a.m. Subscribe to Manitoba Gardener at 204-940-2700 or go online to
localgardener.net.