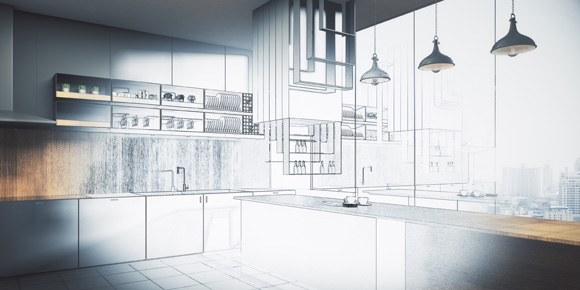 Could kitchens be extinct by 2030?

HGTV, be prepared to mourn — all those sweeping shots of large kitchens adorned with granite countertops, high-shine finishes, commercial-grade appliances, and of course, the ubiquitous kitchen island may soon be a relic of the past, along with formal living and dining rooms.

In June, investment bank UBS published an 82-page report grimly titled “Is the kitchen dead?” where UBS argued that a 20 percent increase in online food ordering sales (e.g., Skip the Dishes) by 2030 could eliminate the need for a kitchen.

“There could be a scenario whereby 2030 most meals currently cooked at home are instead ordered online and delivered from either restaurants or central kitchens,” the report read, while noting that millennials are three times as likely to use these services.

“The expertise currently resides in-house (to cook, as it once did to produce a pair of trousers) could potentially be rendered immaterial, or the expertise might shrink to preparing breakfast or cups of tea, much like sewing has arguably shrunk to basic clothing repairs carried out at home … We could be at the first stage of industrializing meal production and delivery.”

HomeAdvisor smart home strategist and home expert Dan DiClerico says there’s no need to worry about kitchens disappearing, and there’s still plenty of interest in the vast, open-concept layouts that have captured homebuyers’ imaginations over the past 20 years. But, DiClerico said there is a budding movement toward smaller kitchens among millennials.

“We are seeing the pendulum start to swing,” he said. “There’s always going to be a space for [large kitchens], but the younger buyer, the millennial who gets his or her meals from delivery services, they’re going to be less interested in that and be more focused on other areas of the house. I think you’re onto something, but it’s the early days.”

“As the market has rebounded, we’ve seen smaller starter homes being built,” he added. “There’s a different distribution of space in the home that provides the option for a smaller or separate kitchen.”

“In fact, buyers of all ages prefer a larger kitchen mainly for entertaining,” he said. “The kitchen is the focal point of the house, and sometimes it can be a transaction deal breaker.”

“The latest trends in kitchen design are following homeowners’ demands and are constantly changing,” he added. “Current trends include large multipurpose islands, which have become the focal point of the kitchen. In many cases, these large islands have replaced dining tables.”

Although kitchens seem to be safe for now, formal living and dining rooms are on the way out, as described in a compelling op-ed for Curbed by McMansion Hell creator Kate Wagner.

Wagner said it’s important for buyers, builders and renters to be able to discern a need versus a want.

“‘Entertaining space,’” as it is marketed by builders, Realtors, media and popular culture, is, more often than not, a want that has been rationalized and internalized, and thus feels like a need,” Wagner wrote.

“But now that science proves that nobody uses their formal living and dining spaces, it’s time for us to sit down and have a struggle session with ‘space for entertaining,’” she added.

There is some agreement on the declining demand for formal rooms, saying that buyers want multifunctional rooms.

“Again, in general, it’s about having to do more with less, so the formal room, for example, has given way to flex spaces, also known as bonus rooms,” DiClerico said. “These spaces don’t have a single, dedicated purpose the way a living room or formal dining room used to have.”