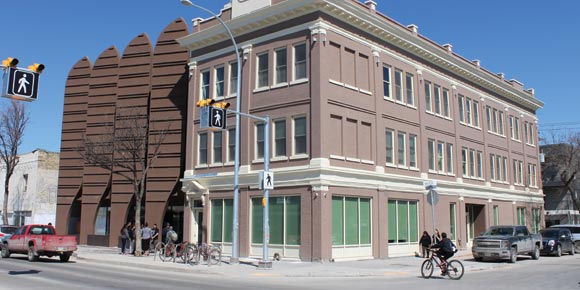 Selkirk Avenue was once a vibrant commercial street serving the North End’s diverse immigrant communities. Though it has endured decades of commercial decline, a stroll down Selkirk still reveals a treasure trove of historic buildings.

Robert and Sarah Steiman came to Manitoba from what is now Latvia around the year 1900 and settled on Selkirk Avenue. They were soon joined by other family members and opened a number of businesses, including Robert Steiman’s hardware store.

By 1913, the business was so successful that Steiman was able to hire Max Zev Blankstein to design a three-storey building at the corner of Selkirk Avenue and Andrews Street. The main floor housed his hardware business, the second floor was the furniture department, and the third floor was warehouse space.

As Eastern European immigrants continued to flood into the Selkirk Avenue area, Steiman had the third floor converted into Steiman’s Hall. It offered a performance area and was home to drama groups and a Ukrainian dance school. It also included office space where professionals such as dentists and doctors who could speak to immigrants in their own language set up shop.

During the Depression, the hardware store fell on tough times and Robert Steiman needed to find a new business. In 1933, he obtained a liquor permit from the province and hired Cecil Blankstein, Max’s son, to convert the building into the Merchants Hotel.

The 40-room hotel with saloon and dining room opened on January 11, 1934, and continued to be a hub for the immigrant community for decades to come.

As the fortunes of Selkirk Avenue declined, the Merchants Hotel became a magnet for crime and violence. In April 2012, the province bought the business and shut it down.

The building was extensively renovated, including a new addition to the east and a stand-alone, 17-unit housing block to the north. It reopened in April 2018 as Merchants Corner, home to the University of Winnipeg’s Department of Inner-City Studies.

The Palace Theatre was constructed in 1912 for North End businessman Jacob Miles. It was the first of what would become a theatre empire operated by the Miles family.

Originally intended to be a live theatre, the Palace faced competition from several other live venues that opened around the same time. Miles changed its focus in the summer of 1913 to that of a movie house featuring the Palace Theatre Orchestra.

In the late 1920s, the Palace was closed twice for major renovations under the direction of Max Zev Blankstein, the building’s original architect. These included adding a balcony, which brought its seating capacity to around 800, and adding the present façade with its decorative brickwork inlaid with tyndall stone detail.

Miles and his company, Allied Amusements, teamed up with Blankstein to build four more theaters by 1931, including the Roxy on Henderson Highway and the Uptown on Academy Road. He then bought the assets of a rival theatre company in 1935, and by the end of the decade owned around 20 theatres in Winnipeg and its suburbs.

Neighbourhood theatres struggled to survive in the 1950s as the popularity of television grew. Miles’ assets were sold off to be demolished or converted to other uses, such as bowling alleys. The Palace managed to hang on as a theatre until late 1964.

In 1966, the Palace’s interior was completely gutted so that it could be converted into an auction house and discount furniture store. From 1972 through to the early 1980s, it was home to a Big Four Sales discount department store.

The building was last used as a training space for an inner-city home renovation program and has been empty since 2003.

The Core Area Initiative set its sights on making physical improvements to Selkirk Avenue in the mid-1980s. One of these projects was “Selkirk Square” at Selkirk and Powers which featured a bell tower as its focal point.

The bell inside the tower is the former city bell. Cast in Troy, New York, the 725-kilogram bronze bell arrived in Winnipeg by steamship on June 23, 1877.

The market was rebuilt in 1889 and the bell was moved to the tower atop the old “gingerbread” city hall. This new location proved to be inconvenient as it required Kirk to walk up more than 150 stairs to reach it. As a result, the practice of ringing of the bell was soon limited to ceremonial occasions only.

When the old city hall was demolished in the early 1960s, the bell was saved and put into storage. It rang again on June 21, 1985 to mark the opening of Selkirk Square.