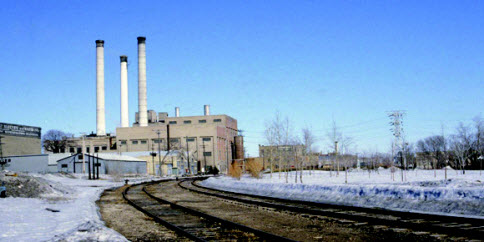 As a member of and the former chair of the public utilities committee, Alderman (today’s city councillor) A.A. Heaps said: “... I want to do this as promptly and fully (purchase the land) to avoid delay. What we did was to look around and try and find a park site as near to Victoria park as possible, one which would supply the loss to the neighborhood of half of Victoria park (for the city hydro standby plant) — such a site was found, but it is eight and one-half acres instead of the half-acre or so at Victoria park, which would have been taken. And the parks board can get it for less than one-quarter of what a park would have cost if we had to find one close to Victoria” (Winnipeg Tribune, February 28, 1923).

The acquisition of the Selkirk Avenue site along the Red River for a new park and the construction of the standby plant in Victoria Park were given final approval by the end of February, but that didn’t mean the issue of Victoria Park’s existence had been fully resolved to everyone’s satisfaction.

After the vote was recorded, Alderman Herbert Gray told a Winnipeg Tribune reporter that he had been urged by two MLAs and up to 30 other people to vote against the city bylaw.

“I told them the stand I had taken and that I saw no reason to change and that I was supporting what I believed was a good thing. The mere fact that the Labor people were the prime movers in this park matter, I said, did not seem to be sufficient reason to oppose it. If a thing is good, in my opinion, for the city as a whole, I am going to support it, no matter who suggests it.”

Presumably, he was referring to Heaps as one of the labour people, since he was a member of the Social Democratic Party and pushed the “park matter.” Heaps was initially opposed to converting Victoria Park into a commercial site, but changed his mind and led the campaign to build the standby plant.

Ironically, some have also said — well after the park’s demise — that the city’s business elite were punishing the labour movement for its participation in the 1919 Winnipeg General Strike by making the park available for commercial development, since the park had been a gathering place for striking workers and their supporters during the work stoppage.

“Last year,” said Gray, “when I happened to be chairman of the committee on a standby plant site, we had a lot of consultation about taking Victoria park, but the other members of the council absolutely put their foot down and said that under no consideration must Victoria park be used for a standby site.”

Gray said other sites had been considered, but they were determined to be unsatisfactory.

“Now I happen to know that when a piece of Victoria park was taken some years ago for the high pressure plant (James Avenue Pumping Station) the city council paid the parks board nothing. When Cornish park was taken for a library the city council gave the parks board nothing. The way the present parks exchange was put to us was that the new park was not going to come out of the ratepayers’ pockets. On the contrary, the city was going to save from $160,000 to $170,000 and, in addition, the parks board was getting a new park worth $48,000 as a free gift (from city hydro).”

Gray said he convinced those who had approached him to change his vote that Victoria Park was the best available site for the plant.

When the parks board met to approve the location of the standby plant in Victoria Park and accept the acquisition of a new park at the foot of Selkirk Avenue, a delegation of 40, representing businessmen, real estate agents and lawyers, as well as the Winnipeg Taxpayers’ Association, objected on the grounds that another site could have been selected and it was unnecessary to purchase new parkland.

“I have always considered a standby plant an expensive luxury for the city,” said W.H. Gardner, who had offered to sell land between James and Rupert avenues and Louise and Amy streets for the plant  site, which had been rejected, as had been three other privately-owned pieces of land (Tribune, March 2, 1923).

Lawyer A.E. Hoskin said: “It would be good business not to buy a new park, but to take the money and pay off the (parks) board’s indebtness.”

“I take full responsibility for this matter,” said Heaps. “I think it is one of the best deals ever put through for the city of Winnipeg. The district is one of the poorest in the city and yet those objecting to the purchase of this park come from some of the richest parts of Winnipeg. Some of these gentlemen have two acres of ground to themselves and I may say quite frankly that the people of North Winnipeg feel that these rich people are trying to deprive our poor chilkdren of this park.”

When the matter came to a vote on March 1, a 5-5 tie was broken when Dr. Robert Fletcher, the chair of the parks board, cast the deciding vote in favour of the transactions.