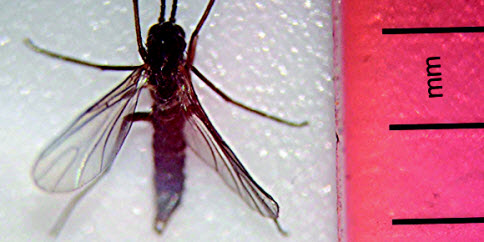 Fungus gnats can be the scourge of houseplants

If you have houseplants, chances are you have encountered the pesky fungus gnat, a little fly that looks like a tiny grey or black mosquito. It does not bite, but will fly up your nose given the chance because they are attracted to the carbon dioxide you exhale.

Fruit flies are easy to tell from fungus gnats. They are orange or brown and have a fatter abdomen. Sometimes fruit flies will invade our homes on the skins of bananas or other fruit where the eggs ride along undetected. Fungus gnats, on the other hand, live in the soggy soils of peat-based houseplants, where they feed on fungus and algae. Some say they eat plant roots, but this may be because they are often found on dying roots that are infected with fungi, which live on decaying organic matter. The gnats lay their eggs in soils such as peat moss that are moist and rich in organic matter.

Wet soil promotes the growth of fungi, so keeping plants on the dry side discourages the pests. Let the top inch of your plant’s soil dry out completely before watering.

There are a number of strategies designed to rid your houseplants of this annoying pest. Use a soil drench to kill the eggs. You can try one part hydrogen peroxide (three per cent as in the kind you find in your local drugstore) to four parts water to hydrate your plant. Alternatively, one tablespoon of dish detergent to one teaspoon of vinegar in one gallon of water is said to work.

Bti (Bacillus thuringiensis israelensis) will kill fungus gnats, but it needs to be applied to the soil over a four- or five-week period to kill of the eggs being laid by flying adults. Some people swear by diatomaceous earth, but the jury is still out on that one, because, while it will eradicate the larvae near the surface, it can’t get at the ones up in the tangled roots.

Some people dust the top of their soil with cinnamon to discourage the adult from laying her eggs there and some add fine sand to top up their plants for the same reason. It is said that the addition of coir (coconut husk) to the soil is a deterrent to egg laying, but if you add coir, be very spare in your watering, since coir holds many times the amount of moisture than peat.

You also need to capture the adults, which are attracted to the colour yellow. Coat both sides of a sticky note with Vaseline and lay this horizontally on the soil. A dish of cider vinegar containing a drop or two of dish soap (to break the surface tension of the vinegar) can also be used to trap and drown the flyers.

Fungus gnats are generally harmless, but they can also carry a plant disease called pythium on their feet. Pythium is the cause of root rot.

Fungus gnats are short-lived but are prolific breeders. The female lays about 300 eggs during her brief time in the air. It takes three to four weeks to get through the egg, pupal and larval stages to emerge as an adult fly.

The flies live only seven to 10 days. This means that getting rid of an infestation takes time and patience. To check and see if you got all the eggs, cut some slices of potato and lay these on the surface of the soil. Leave for a few days and then check the underside of the potato slice. You will be able to see larva that still exist in the soil. They are translucent with black heads.

Even though you have gone to the trouble of washing the plant roots and disinfecting the pot with bleach to kill any hidden eggs, you may still be seeing fungus gnats. The reason for this may be that there are eggs in the new soil you just purchased, especially peat-based soils. Be sure to quarantine any new plants for a couple of weeks before introducing them to the rest of your indoor garden.

Fungus gnats and their eggs also occur in real garden soil and plants taking a summer vacation outside may pick up some eggs naturally.

It is hard to believe that fungus gnats have any useful role in nature, but, in fact, they are excellent pollinators of a number of plant species, including some orchids. According to Wikipedia, they also help spread mushroom spores, although a mushroom grower had very evil things to say about their presence in his mushroom media.