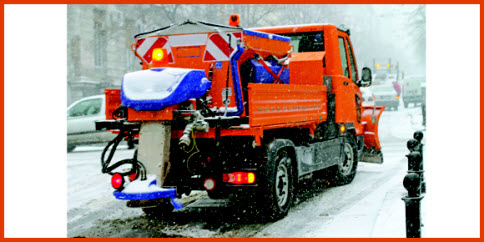 Beet juice used as a de-icer on roads

At this time of year, we can’t help but have ice on the mind. It’s everywhere, especially on streets and walkways, presenting a hazard for the careless footfall. So let’s use our knowledge of this slippery stuff and try to meet it head on.

One of our first defenses is to get rid of it. We shovel and scrape and use whatever ice mitigating substance we can lay our hand on, from salt to ashes, to sand and, lately, to some new substances.

Salt doesn’t “melt” ice. It lowers the freezing point of water, meaning that ice mixed with salt will have to get a bit colder to stay frozen. When water freezes, the two hydrogen atoms and one oxygen atom are bonded covalently (sharing electrons).

When ice is formed, the molecules are more widely separated causing the ice to be less dense than in water, but also to take up more space. Water expands nine per cent when it turns to ice. Water’s boiling point is also higher than many other liquids because of the strength of the hydrogen bonds.

When ice melts, energy from heat causes the molecules of hydrogen and water to move faster. This breaks the hydrogen bonds between the molecules, causing liquid water. The water molecules absorb energy as the ice melts.

As for those new methods to deal with ice? Lately, public works departments have been mixing beet juice with salt. Beet juice is “stickier,” meaning it bonds to pavement and reduces the bounce rate of the de-icer. Salt bounces at a rate of 30 per cent, while the beet mixture only bounces at a rate of five per cent.

As well, beet juice lowers the temperature effective of salt from about -10°C to -25°C and reduces the use of salt by about 30 per cent. Of course, beet juice costs four times as much as salt, but its effects last two to five days.

Why doesn’t it leave a red stain? They use white beets.

There are many other de-icers. Rubbing alcohol or vinegar can help prevent ice buildup on your windshield. Some airports use potassium acetate as de-icer as it is less corrosive on metals and concrete, but it is expensive and the run off can lower oxygen in water, an issue for aquatic life.

So why is ice slippery? Just as why hot water freezes faster than cold, we are not entirely sure, but one recent explanation is that the surface molecules of ice, when they are in contact with air, can’t bond with the molecules beneath them so they remain liquid. The old explanation was that friction cause by another substance moving over the ice cause the surface molecules to melt. The end result is the same.

Not everyone wants to get rid of ice.  We’ve been using it as a coolant as long as man has been around, and storing it has been practiced for millennia. The Persians used to dig deep holes in the desert, lining their underground facilities with an interesting mortar made from sand, clay, egg whites, lime, goat hair and ash. It was 100 per cent leak free. They also defined wind-catchers that further reduced temperatures in their storage units.

It’s used in other ways, as well. Geilo, Norway, hosts an ice music festival every year. The musical instruments are carved from blocks of ice and tuned by the musician. As the instruments melt, the sound changes.

And, as we know so well here, ice makes a lovely medium for sculptures.