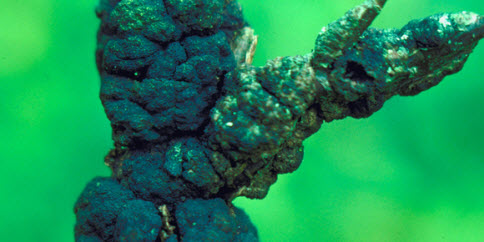 This is the time of year when black knot infections become increasingly apparent. A couple of years ago, you could see swollen branches on tree after tree in areas such as Linden Woods, where the lovely purple-leafed Schubert chokecherries were planted on boulevards. The city finally gave in and culled hundreds of these trees to deal with the massive infection.

Black knot is a fungus, Apiosporina morbosa, that colonizes members of the Prunus or cherry families, including plums and apricots, and for the past several years, it has been rampant in Manitoba, infecting wild stock such as chokecherries as well as ornamental trees. It looks just like its name: a black knot that swells branches and twigs and eventually infects main stems where it will be seen to rot away part of the trunk.

In its earliest stages, look for light brown swelllings on new growth. Left uncut, these swellings will split the bark, revealing an olive green, velvety texture. This velvety coating is made up of the fungal spores and it is now that they are the most infectious. The olive green swellings harden and darken by the end of the season, developing a corky texture that still harbours spores.

The following year, the swelling will become a gall-like growth.

Black knot is a relatively slow growing disease, which can be managed by pruning in its early stages. Once trees have gone dormant, look for any swellings or galls on the branches and twigs. The swellings may be slight, one to six inches long. Galls can be much longer.

With sterilized pruners, cut out the infection at least four to five inches below the swelling. Wash pruners in a 10-per-cent bleach solution after each cut, and burn the infected prunings if you can to prevent further spread. The fungus on the prunings can continue to produce spores for about four months after the cut.

You can back this up with an application of lime sulphur before bud break in spring.

Unfortunately, none of these actions is a cure, but the pruning routine can keep your trees alive for many years. Left unpruned, the black knot continues to grow along the infected branch, while spreading spores to other branches and eventually the main stem.

There is also no prevention. Black knot is cyclical and it generally follows a wet spring. Wild plums and chokecherries are often the early vectors so control is dubious.

Fortunately, there are a few varieties that are resistant to black knot. The Amur chokecherry is a good choice. Not only does it keep black knot at bay, it has beautiful, cinnamon-coloured bark that glows in the sunlight and peels as the tree ages. It produces scented racemes of flowers in springtime, which become black berries by late summer, attracting birds.

If you are bent on having purple leaves in your garden, there is a purple-leafed variety of Amur chokecherry, Royal Crown. You could alternatively plant the purple-leafed Prairie Splendor Norway maple.