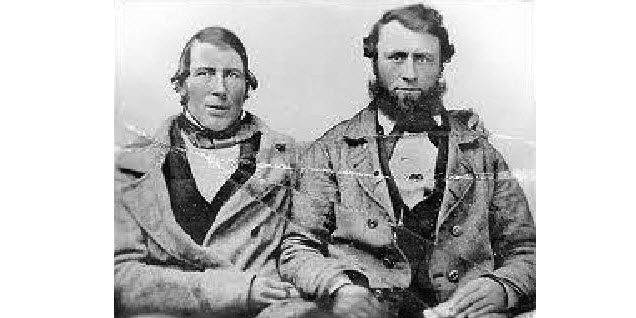 The jury delivered a guilty verdict but granted mercy

It wasn’t until a Métis petition was filed after the Pierre Guillaume Sayer trial that Adam Thom, the Recorder (judge) of Rupert’s Land, agreed in 1849 to allow French in the court. But by 1851, he was replaced on the bench by Rupert’s Land Governor Eden Colvile, although Thom retained the office of clerk of Assiniboia and kept his high salary of £700.

“You speak too much!” said Métis delegate Louis Bruce to Thom during his two-hour lecture on the law before the May 17, 1849, Sayer trial got underway. “We don’t understand you.”

Two others even entertained shooting Thom on the spot.

“Had it not been for the calm conduct of Mr. Sinclair and the influence of Mr. McCallum and Pascal Bréland,” Alexader Ross, who was the settlement’s sheriff and a member of the court trying Sayer, wrote in his book, The Red River Settlement, mob rule would have triumphed.

After Thom’s lengthy discourse about the law of the land, he gave James Sinclair permission to plead on behalf of Sayer. But before that, Thom suggested he serve on the jury, which would have negated Sinclair as representing the defendant. Sinclair declined, saying he was only there to speak for Sayer.

Sinclair then left the courtroom to fetch Sayer. The defendant entered the court with 20 Métis, all armed, who took up a position at the entrance to the courtroom. At the outer gate of the fort, another 50 armed Métis were placed as guards.

Sinclair objected to nine of the 12 jurors selected to hear the case, but wasn’t successful in his challenges to their participation in the trial.

Manitoba historian W.L. Morton wrote in London Correspondence Inward from Eden Colvile 1849-1852: “When the jury was empanelled, there were seven English names and five French. They sat in the box with their powder horns and shot pouches still at their belts.”

To say the least, it was a somewhat unorthodox jury taking part in an unorthodox trial by the judical standards of the day in other regions of British North America that were outside the Hudson’s Bay Company’s sway.

The first witness was Magnus Linklater, an HBC employee, who told the court that Sayer brought furs to the Upper Fort Garry post.

“I asked him if he had traded them,” Linklater testified. “He replied that he traded some and the others he had hunted himself. He said he had killed some foxes. I did not take the skins from him at that time.”

During his cross-examination, Sinclair asked Linklater when Sayer obtained the furs. He admitted that Sayer hadn’t said whether he hunted the furs that year or 10 years earlier.

The next witness was 12-year-old Louison Sayer, the son of the defendant. He said his father told him that he received a few furs as a present from his relatives.

“He traded some furs from the half-breeds. Blankets was the principal article he traded with. I saw him give a dram of spirits to the people he was trading with.”

Other witnesses appeared before Sayer finally took the stand. He admitted that the Company warned him not to trade with the Indigenous people of the district.

In what is described as a heated exchange with Ballenden, Sayer refused to admit he was told not to trade with Métis residents.

“You say that when (John Edward) Harriott advanced you credit in the winter he forbid you trade with the Indians but never the half-breeds?” asked Sinclair.

“That is the truth,” replied Sayer.

“That is why you thought it proper to trade with the half-breeds and you did so?”

Ballenden, despite being the prosecutor, took the stand for the Company — another indication of the unorthodox nature of the court. He said he had explicitly told Sayer not to trade with anyone but the HBC.

Ballenden said he ordered Harriott to advance credit to Sayer, while Harriott hadn’t wanted to have anything to do with Sayer, as he was of “indifferent character.”

According to Ballenden, Sayer was told that if he was unable to pay his debt to the Company with furs, he could pay with salt.

Salt was a valuable commodity in Assiniboia (it was difficult and expensive to transport when imported from abroad), especially for preserving meat. Salt-making became an Ojibway and Métis cottage industry in the vicinity of natural salt springs in the Swan River, Duck Bay and Red Deer Peninsula of the Lake Winnipegosis region. It’s no wonder that Ballenden told Sayer he could pay off his debt with much-prized salt.

Ballenden was the last to testify and then Thom summed up the evidence.

He again explained the rights of the Company under its charter. “All furs,” he said, “which are hunted for profit and sale must be traded through the Company store. To do otherwise is a crime and has been so since the granting of the charter in 1670.

“A settler may import and trade in English goods. The company will even transport the free trader’s merchandize for him in their own ships. All that is required of the trader is that he show a clean record with regard to the crime of private traffic in furs.”

After deliberation, the jury returned with a verdict of guilty, which couldn’t be avoided under the circumstances of Sayer’s admitted trading practices and the trade monopoly held by the HBC under its company charter.

“As it appears from the testimony that Guillaume Sayer thought he had a right to trade as he was never told not to and as he was under the impression that there was a free trade with the half-breeds,” said jury foreman, Donald Gunn, “the jury recommends the defendant to mercy.”

“We thank you, Mr. Gunn,” said Ballenden. “I wish it to be understood that the company does not value the furs that were traded. What we look at here as the important matter is the principle of the transaction. I should like that to stand on the record. Guillaume Sayer broke a law and it was so found. Since the jury has now given a verdict against illicit trading, I ask Judge Thom to dismiss.”

libre” (“And I declare that from this moment Sayer is free”) to the cheers of the Métis audience observing the proceedings.

Under the circumstances, despite the guilty verdict and faced with a potential revenge-seeking mob, Thom had little choice but to accept Riel’s declaration and Sayer was indeed a free man. Thom’s own declaration was that the case was dropped “in favour of the restoration of tranquility in the settlement.”

The cases of Goullé, McGillis and Laronde were not proceeded with, and along with Sayer, they left the courtroom to a chorus of cheers. Sayer was even carried out of the courtroom on the shoulders of his compatriots.

“As the offenders troubled themselves very little with the subtleties of the law, it was their own belief, and that of the people,” wrote Ross, “that they were honourably acquitted, and that trading in furs was no longer a crime.”

Ross related that the people believed that ruling was so obscure on the future of fur trading that one of the jurymen gave three hearty cheers at the courtroom door and shouted out his own opinion of the outcome: “Le commece est libre! Le commerce est libre! Vive la liberté!” In English: “The trade is free! The trade is free! Long live liberty!”

With this pronouncement, free trade was the practice henceforth followed, as the Company never again sought to enforce its charter monopoly on trading in furs. After the Sayer trial, HBC officials knew it was both impractical and dangerous for the Company to pursue such a policy.

The Council of Assiniboia met on May 31 to discuss what should be done following the trial. It acknowledged what had become fact in the Red River Settlement. “With regard to free trade in furs, the council cannot interfere in the matter, as any alteration can only be effected by the Queen (Victoria) and the two (British) Houses of Parliament (Commons and Lords).”

Historian Frank Schofield wrote: “The result of the trial showed the HBC that the people would no longer submit to its monopoly of the fur trade. The courts, even if they gave decisions in favour of the HBC, had no means of enforcing them against adverse popular opinion. From that time forward, although the Company did not formally renounce any of its special privileges, trade was practically free.”

It proved the Company’s inability to enforce the law, and gave the people a consciousness of their strength.”

In the wake of technically acceding to free trade, the policy of the Company outlined by Simpson was to increase the number of frontier posts, reduce the price paid for Company goods, and give higher prices for furs than their competitors. That was the only way that the Company was able to retain the majority of trade in Rupert’s Land in the absence of a monopoly.