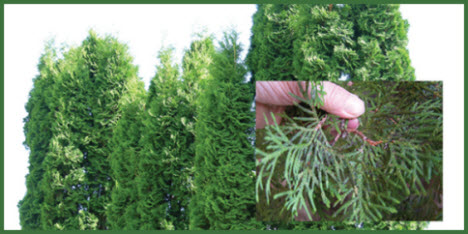 It is so disheartening to drive down a street and see an avenue of brown cedars lining a hopeful homeowner’s driveway.  It is easy to imagine the excitement and promise the homeowners felt when they planted these trees and just as easy to imagine their heartbreak when there is nothing left but a row of brown sticks the following spring.

Chances are the homeowner bought the trees last year at a bargain price from a big-box store. Often these are a variety called “Smaragd” or “Emerald Cedar,” favoured by big-box stores, but somewhat marginal in Manitoba if not carefully cared for when young.

It may even be that the trees were labeled “grown in Canada,” but the location may have been British Columbia or Ontario, where conditions are somewhat less harsh during the winter than here.

Care at big- box stores is another issue. Often these trees are potted, confining the root ball to an extremely small space and subjecting the tree to overheating and a shortage of water for several months. This stress reduces the viability of the tree.

My best advice is to ignore the sticker price and head for your nearest local garden centre where you may pay more up front, but you have guarantees and the retailer knows what he is talking about. And while the six-foot tree is always tempting, often starting the tree from a smaller version will give it a better chance of survival and a stronger and longer lifespan.

However, if you can’t resist the price and really want the trees, here are a couple of tips to help these bedraggled fellows exist into next year.

•          Examine the root ball. Pull the tree out of the plastic pot to see if roots are circling the pot. If so, be sure to disentangle the roots before planting the tree, otherwise the tree will strangle itself.

•          Dig a hole at least twice as large as the pot, but only a little bit deeper. Build a mound in the centre of the hole and carefully position the tree over the mound, spreading the roots out around it.

•          Fill the hole with some of the soil you dug up mixed with some organics such as peat moss. The soil mix should be porous enough for moisture penetration, but strong enough to anchor the roots. Add some bone meal and some slow release fertilizer to the mix.

•          Fertilize in May, June and July with a water-soluble fertilizer. In the fall, after deciduous trees have lost their leaves, add a slow release fertilizer to the root zone to give the plant a boost next spring.

•          Add an organic mulch to the root zone to keep moisture in. Be sure to leave a few inches of space between the mulch and the tree trunk.

•          Water, water, water, this first year, especially in the fall before freeze up. This is critically important to allow the tree to store moisture in its leaves, because cedars do not go completely dormant in the winter. Cedars have shallow roots.

Cedars need sunlight, but be careful of south-facing exposures in areas where the wind is strong and the sunlight is likely to reflect off snow. This can cause winter burn that will turn the needles brown. If this is the exposure, then be sure to create a burlap screen for the first couple of years. Do not wrap the tree, just provide a structure that will shield it from harsh winds and bright sunlight in winter.

They are subject to few pests and diseases, but watch for scale insects, which can be seen as raised brown spots on the undersides of leaves. The danger from these sucking insects is that they can spread sooty mould, which can kill the tree. The mould appears as black staining on the leaves and twigs. A repeated washing with a sharp spray from a hose in June can help.

Don’t prune too vigorously. Cutting a branch back to the trunk will leave a bare spot that won’t be replaced.

In spite of all these warnings, well planted and well-tended cedars are very hardy in Manitoba. They really need a little extra care once they are established.