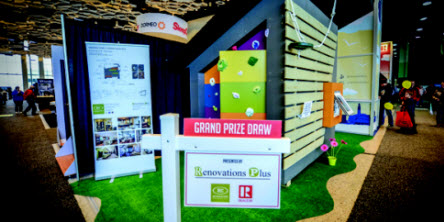 Carpentry teams building playhouses for sale by Habitat for Humanity

by Peter Squire and Sandy Hopkins

At the 2016 Winnipeg Home and Garden Show, during which both the Manitoba Real Estate Association and WinnipegREALTORS® were the presenting sponsor, the associations joined with Renovations Plus for a grand prize draw of a uniquely-designed and spectacularly-looking playhouse valued at  $10,000.

A senior couple won this playhouse and decided to take it down to their cottage in Grand Marais where it has become a popular attraction for their  grandchildren and neighbourhood chidren.

In close proximity to the REALTORS® exhibit and the playhouse was a  Habitat for Humanity Manitoba display.  Habitat is committed to creating a world where everyone has a decent and affordable place to live. To this end, Marketplace Events, the producer of the Winnipeg Home and Garden Show, has partnered with Habitat across North America to help them fulfill their mission of making homeownership a reality for people, including Winnipeg.

Was the playhouse an inspiration for a Habitat project?

What if you could purchase, at a significant discount, something built by one of the best carpentry teams in Canada who will make your children over the moon happy? On Saturday, June 3, you will be able to do exactly that.

Winnipeg is hosting the Skills Canada competition this year. Skills Canada brings together professional trades people from across the country, who have won regional and provincial competitions, to compete for the right to represent Canada at the World Championships. Among the trades people are small teams of carpenters, each of which is tasked with building a playhouse. Not just any playhouse, but one with a cool design and striking lines that will provide endless hours of fun for your children and their friends.

When the competition is over, the playhouses will be given to Habitat for Humanity. Habitat will pick them up at the RBC Convention Centre at 9 a.m. on Saturday, June 3, and bring them to our ReStore at 60 Archibald Street. They will have a retail value of between $1,000 and $1,200, but we will be selling them for substantially less. The price, off the back of the truck in our yard, will be $600. Those not sold off the truck on June 3 will be placed in our yard and priced at $700.

The ReStore, which was invented in Winnipeg in 1991 and has grown to more than a 1,000-store chain to become the largest single source of cash of Habitat for Humanity globally, has three purposes. Externally, it provides a low-cost alternative for home renovation, repair or décor (and sometimes has something very special like these playhouses). We estimate that the ReStore diverts more than 3,000,000 pounds annually from the landfill site in Winnipeg. The internal purpose is to cover our administration and overhead costs with profits from the stores, thus reducing the need to use money raised in the community to pay those bills.

Therefore, when you purchase one of these playhouses — it will make you a great hero at home — you will also be helping a low-income working family to achieve their dream of homeownership. This is a life-changing experience that scientifically valid studies (conducted by Canada Mortgage and Housing Corporation and the Boston Consulting Group, which are available from Habitat) have shown to improve health and educational outcomes, while decreasing the likelihood that the family will require social assistance in the future. In addition, every home built is a significant contributor to our community.

(Peter Squire is the vice-president of external relations and market intelligence for WinnipegREALTORS®, while Sandy Hopkins is the CEO of Habitat for Humanity Manitoba.)