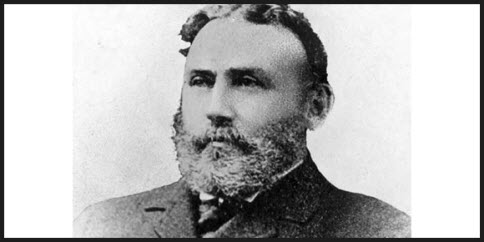 In his book, The Impossible Railway, Pierre Berton wrote that supper at a Winnipeg boardinghouse consisted “of a plate of odorous hash, flanked by a mug of tea and a slab of black bread, served up by a number of ‘ghastly, greasy and bearded waiters with their arms bare to their elbows and their shirt bosoms open displaying considerably hairy breast.’”

Due to the shortage of housing during the great land boom of 1881-82, real estate auctioneer A.W. Ross saw an opportunity to make more cash and imported portable houses from the east. With space at a premium, all the houses were sold before they even arrived in Winnipeg.

But dangerously looming on the horizon was another troubling development, which had the potential to derail the money-making schemes that had been fostered by land speculators.

At some stage, all such speculative real estate bubbles run out of victims ready to sacrifice themselves on the altar of greed, and Winnipeg’s “joy-ride” of 1881-82 was no exception. Why the bubble would eventually burst was due to a couple of factors, not the least of which was an unexpected, “Act of God.”

On April 12, 1882, Ross began to advertise lots in Edmonton, which would be “the future Golden City of the Dominion.” At first, people flocked to his Winnipeg office snapping up the lots.

James Scott, the future president of the Winnipeg Real Estate Exchange (now WinnipegREALTORS®) wrote about the scene that unfolded during the Edmonton lot auction, which appeared in the Winnipeg Tribune on October 11, 1906. He described “a double line of men, half way across the street, trying to buy lots. A minister still in the city, seeing the crowd, asked a noted lawyer of that time ‘what was the meaning of the crowd?’ The reply was “A lot of d--- fools trying to throw their money away.’”

The April 15 Free Press reported “a crowd ... thronging the office of A.W. Ross and stretching out across the sidewalks and almost entirely preventing travel on that side of the street.”

According to the newspaper, “a phenomenal excitement” prevailed “among eager investors” wanting to purchase Hudson’s Bay Company (HBC) lots in Edmonton from Winnipeg auctioneer T.P. Murray.

The syndicate of Walker Stewart & Co. was reported in the newspaper as having, over the course of three days, sold and re-sold over 300 lots. On April 14, the price ranged from $400 to $600 a lot.

Speculators felt profits were just around the corner, but within days they couldn’t find anyone willing to buy the lots they had earlier purchased.

Coolican attempted to revive the faltering market by taking a Dionysian train excursion with fellow speculators down to St. Paul, Minnesota, to sell lots in St. Vincent, Minnesota, a few kilometres south of Emerson, Manitoba.

If Coolican knew the speculative land bubble was leaking air, he wasn’t letting anyone know in St. Paul.

The St. Paul Press described Coolican as having a two-carat gem in his scarf and another on his left hand, as well as being nattily dressed (reprinted in the April 27, 1882, Free Press).

The Minnesota newspaper reported that Coolican was the consummate entertainer before a gathering of several hundred in the St. Paul Opera House, which “helps to explain the Winnipeg boom.”

For two hours, he harangued the crowd, urging them to, “Hitch on while the boom is on, and you’ll be wearing seal-skins and diamonds next year.”

Coolican told his captivated audience that he first came to Winnipeg in a cattle car and would soon be returning to the city in a luxurious Pullman car.

According to the newspaper, Coolican spoke a “ceaseless flow of words diversified by story or incident ... and the people bought.”

Coolican and his Winnipeg entourage sold $100,000 worth of St. Vincent lots, but Mother Nature played a dastardly trick upon him and his companions as most of the lots sold to St. Paul investors were inundated by Red River floodwater — much to their chagrin.

The New York Times, serving the city where many investors in Manitoba railways were located, reported telegraph poles linking the city with the south were washed out by the flood as was the CPR line between St. Paul and Winnipeg. In effect, the city was cut off from the outside world.

The first indication of impending peril was news from Emerson. The April 17 Emerson International reported that people lined the banks of the Red near the Emerson Bridge to watch the water rise. “About six o’clock a large field of ice came floating down, and gave what remained of the bridge a pretty good shock, but it stood nobly. At this time the water was within a few inches of the flooring of the bridge and this same floe of ice carried away the swing portion of the bridge composed of wood and iron, and after floating a short distance down stream, went to the bottom.”

Two piers and a span on the west shore remained intact after a portion of the bridge fell into the water.

The Sun reported on April 19 that ice on the Red River began to break up. “While the news of high flood at Fargo and the carrying away of the Emerson Bridge were exciting public attention here, the citizens were congratulating themselves that the river was going to empty itself without loss of property on its banks nor yet causing alarm for the safety of the bridges.”

The newspaper marvelled that people believed Winnipeg would “escape scot free when the river had to bear the floods on the upper stream and all the contributions of the streams between.”

Even the Sun predicted on April 14 that the “opening of navigation cannot be far off” because Red River ice was breaking into “cakes” swept away by the current. In anticipation of the new navigation season, Winnipeg’s shipyards were said to be a hive of activity with “artisans ... hard at work on the river craft.”

But from Wednesday night until Thursday at noon, the Free Press reported that the “ice remained motionless — a rugged, sinister area, picturesque but terrible. From bank to bank, up and down the river for miles was one vast plain of grinding, troubling ice.”

At 1:15 in the afternoon of April 19 — just four days after its grand opening — the Broadway Bridge began to swing and sway with the impact of a massive ice jam covering the breadth of the river. As a result of its unnatural motion, one and then two spans plunged into the river and travelled downstream upon the ice at an estimated pace of 10 km/h.

It would take three weeks before the rail link was restored and by that time, water-sodden city residents realized the bubble had burst.

Coolican eventually got back to Winnipeg via steamboat on April 28 and took out a front page ad announcing, “Coolican’s Return! and the Boom Returns Also!” — but there were no takers.

“The boom was purely speculative,” said Ross. “The operators went into it on the presumed requirements of the coming summer and overdid it. The floods came, and the whole thing then collapsed.”

Ross, himself, was financially ruined by the collapse of Western Canadian real estate. Like the other speculators, Ross had purchased land with a minium down payment and was forced to sell his land holdings at a heavy loss when installments came due. His buyers, who like him had also purchased at low down payments, were in the same situation. When they were unable to pay, they abandoned their purchases, leaving Ross holding their notes. Creditors, such as the HBC, demanded Ross make his payments, but he was insolvent.

The Winnipeg-based Commercial newspaper denounced Ross as a swindler who had engaged “ in the wildest schemes of speculation with funds altogether inadequate for a tithe of his undertakings” (Dictionary of Canadian Biography).

Other newspapers were more sympathetic and urged creditors to negotiation terms with Ross in order to clear his debts.

Ross did manage to rebound as a successful politician and later returned to selling real estate in Vancouver and Winnipeg.