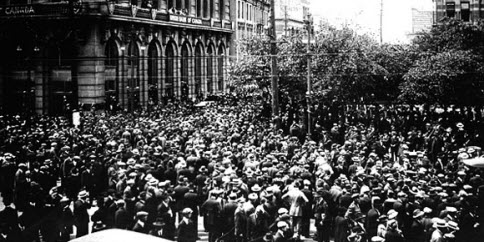 General strike of 1919: cause and effect

Who won and who lost the Winnipeg General Strike of 1919, one of the most important political and social upheavals in the history of Canada, has long been debated by historians. Basically, it can be said that labour lost and business won, since union leaders ceded defeat in the face of violence erupting on the streets to which they had no answer.

But that’s too simplistic a viewpoint. There is strong evidence that from the ashes of the strike, the labour movement was converted into a political force for social change.

The strike itself was never a battle solely between unions, business leaders and politicians, as it also involved men and women without a union affiliation. In effect, they put their jobs on the line to battle for workplace justice. At the height of the strike, 30,000 workers walked off the job.

On the other hand, employers and government feared the outbreak of a “revolution” and the spread of “bolshevism” — the so-called “Red Scare.”

The radicalism of the “One Big Union” movement, formed at the Western Labour Conference in Calgary in March 1919, was perceived by the Canadian government and employers as a prelude for revolution — both vehemently opposed the strike — while the unionists regarded it as an attempt to gather all workers, skilled or unskilled, under  a single banner to mobilize the strength of the working class.

Before the general strike, returning soldiers did not find the job rewards they expected for their sacrifices during the First World War. There was high inflation due to the cost of the war, low wages, high unemployment and rumblings about immigrants taking over their jobs.

For all groups, there was a belief that a societal upheaval had been brewing for far too long and eventually a major clash between competing interests would occur.

The seeds of the troubles of 1919 were actually sown years earlier; ironically, immediately after striking workers had won concessions. Reverends Joseph Sparling, the principal of Wesley College, and William Patrick, the principal of Manitoba College, successfully arbitrated a dispute between the WERC and its striking motormen and conductors. Due to their efforts, “the greatest and most exciting strike in the history of Winnipeg ... (ended) on Saturday afternoon (April 7, 1906),” reported the Morning Telegram, “much to the relief of the directors of the street railway company, the men concerned in the dispute, and, by no means least of all, to the satisfaction of the public in general. It was a weary nine days for all concerned.”

The group which learned the most from the 1906 streetcar strike was the business elite. After the strike, other methods to combat workers’ demands were developed. Less than a month after the streetcar operators and conductors walked out, a hard line was adopted by the management of the Vulcan Ironworks against its striking employees. Vulcan owners Leonard R. Barrett and his brother, Edward G. Barrett, were extremely hostile to labour, professing a divine right to run the company without union interference. L.R. Barrett said, “God gave me this plant, and by God I’ll  run it the way I want to!”

Frustrated by weeks of futile negotiations, the plant’s moulders went on strike on May 18. Vulcan’s machinist and blacksmiths presented their own demands and issued an ultimatum calling upon the company to immediately reply. The workers were subsequently informed by management that the plant was closed. After the lock-out, the three unions set up a joint committee to negotiate with the company. The company expressed willingness to discuss wage demands, but adamantly refused to hold talks with union representatives. Subsequently, Vulcan declared itself to be an “open shop” free from unions.

For the first time in Winnipeg’s history, the company then enlisted the help of the court and obtained an injunction against the striking workers, prohibiting them from picketing in the vicinity of the plant. The court ruling removed a very public display of solidarity which may have united Winnipeggers to the workers’ cause as was the case during the streetcar strike. For the company, the absence of a picket line meant the unhindered passage of strikebreakers into the iron works and the company being able to maintain “business as usual.”

Meanwhile, sympathy strikes ordered by union organizers for the Northern Iron Works and the Manitoba Iron Works were quickly settled with workers gaining a 2.5-cent an hour wage increase. The management of the two iron works sought a quick resolution to the disputes with their workers in order to fulfill pressing contract obligations.

Two months into the strike, the Winnipeg Trades Council passed a motion declaring Vulcan as “unfair to organized labour.” The motion resulted from Vulcan’s refusal to negotiate with its striking workers as well as the company’s importation of strikebreakers from Eastern Canada and the United States.

By the end of July, the strike was over. “The unions had been thoroughly whipped and the men found themselves competing with strikebreakers to regain their old jobs,” wrote David Jay Bercuson in his 1990 book, Confrontation at Winnipeg: Labour, Industrial Relations, and the General Strike. “The Vulcan Iron Works strike-lockout of 1906 set a pattern for labour-management relations in the city’s contract shops that was to be followed for the next thirteen years. As with the streetcar strike both sides wanted a showdown; but in this case the union was not yet strong enough to take on this most obstinate of employers and suffered humiliating defeat.”

Vulcan continued its pressure against the unionization of its workers. “This is a free country,” said company president E.G. Barrett, “and as far as we are concerned the day will never come when we will have to take orders from any union.”

With the help of the court, Vulcan was able to defeat worker strikes in 1906, 1917 and 1918. But following a long period of festering tensions between employers and employees — including Vulcan and the Metal Trades Council — hired special constables, police and the militia would again clash with crowds.

On “Bloody Saturday,” June 21, 1919, mounted police charged down Main Street, firing into a crowd protesting the arrest of seven strike leaders. Two men in the crowd were killed. The general strike soon afterward collapsed, but unionists learned the lesson of using ballots to obtain more political power, and subsequently elected labour members to the city, provincial and federal governments. Leading the way was J.S. Woodsworth — the founder of the political movement that led to the creation of the NDP — an Independent Labour Party candidate, who was elected as the MP for North Winnipeg in 1921.