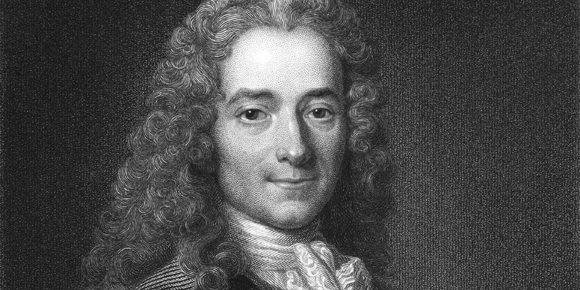 There’s some question about who actually said what

Everyone who reads this column has heard or used at least one idea first uttered by François-Marie Arouet (1694-1778). He is one of the most frequently quoted people of all time, both orally and in print.

Here’s one of his best-known pronouncements. “Common sense is not so common.” Here’s another. “If God did not exist, it would be necessary to invent him.”

Arouet, who is better known by his pen-name, Voltaire, is often credited with this bit of wisdom: “I disapprove of what you say, but I will defend to the death your right to say it.”

But did he say it? Research seems to indicate the above maxim was first found in the biography, The Life of Voltaire, by English author, Evelyn Beatrice Hall (1868-1956). Hall wrote under the pseudonym S.G. Tallentyre.

Voltaire is also often claimed as the originator of the advice about washing dirty linen in public. Still, as with the above example regarding the defense of free speech, research points away from Voltaire.

Many scholars believe the dirty linen saying is an ancient Danish proverb. Others credit Napoleon who, without doubt, did make it famous when he returned from imprisonment on Elba. In an 1815 speech, he said, “It is in the family, not in public, that one washes one’s dirty linen.”

Today, the exact wording of this proverb varies. In Oxford Quotations, we find, “One does not wash one’s dirty linen in public.”

The dirty linen saying emerged in English in 1867 when it appeared in the novel, The Last Chronicle of Barset, by English author, Anthony Trollope (1815-1882). Trollope used it this way: “There is nothing, I think, so bad as washing one’s dirty linen in public.”

By the late 1800s, references to washing linen in public had become commonplace.

Even though there continues to be controversy about the origin of the dirty linen proverb, there is no argument regarding its meaning which is, it isn’t a good idea to discuss family problems in public.

As Charles Earle Funk puts it: “Family quarrels or matters concerning members of the family should be kept within the four walls of the home” (2107 Curious Word Origins, Sayings & Expressions).

Contemporary Americans have come up with yet another variation. Rather than use the word, “public,” some Americans say, “clothes-line,” as in, “Don’t hang your dirty linen on the clothes-line.”

Linen functions in this saying in one of its very early meanings — undergarments — which translates to: Don’t wash your dirty underwear in public.

Linen, in reference to products made from the fabric called linen, came into usage about 1748. Its original meaning, “cloth woven from flax,” is earlier, probably circa 1566.

One interesting development regarding this word was its 1796 plural form, linens, meaning, “grave-clothes”— the clothes one is buried in.