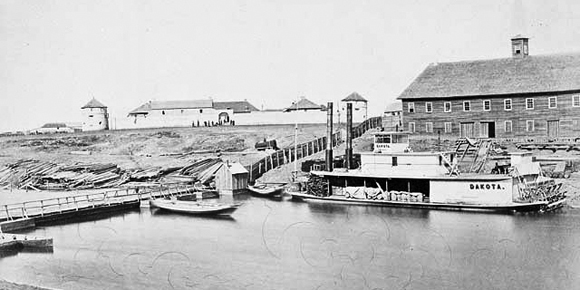 George Babington Elliott wrote in his promotional pamphlet, Winnipeg as It is in 1874: And as It was in 1860, that mid-city properties had reached their highest limit in value, but the suburbs were promising areas for investment. Lots within a mile radius of the Court House on Main Street could be obtained between $20 and $100.

The Dominion Land Office in Winnipeg entries for July 1874 reported “a large increase over any month in the year.” July entries included “63,741 acres, sales 2,710 acres, warrants (guarantees for the security of title to property) 3,040.

“For the month of August the locations were 46,200 acres, besides purchases for cash and warrants of 5,246 acres.”

Elliott said rents were high in Winnipeg, especially for houses located in the centre of the city.

Board was obtainable for between $4 to $10 per week, with $6 being the average “for tolerably good board.”

The newspaper claimed that rents were not likely to decrease due to the continued influx of immigrants (then primarily from Ontario, although a significant group of Mennonites had settled on land south of Winnipeg).

“At present we have not sufficient house accommodation for the number of people in the city, and as the country develops, this being the chief city and the centre of travel, there will be a corresponding demand for houses.”

The strong demand for new housing was why the newspaper promoted, although unsuccessfully, the establishment of a “building society” funded by outside capital to “erect a number of houses for the purpose of renting them, and take advantage of getting a higher rate of interest for the money extended, but at the same time we think that if they confined themselves altogether to lending money for building purposes, they would do more good to the city.”

The 1874 real estate market showed that Winnipeg was taking tentative steps towards the establishment of a true city on the Canadian prairie, although there was still a long way to go before it could hope to earn the title “Chicago of the North.”

Elliott wrote that the number of buildings of all kinds in the city were 908, with 408 being “dwelling houses.” It should be noted that the then city’s boundaries were significantly smaller than today’s and comprised mostly what is at present the downtown core. The primary commercial area was along Main Street.

In 1874, there were 17 hotels in Winnipeg, seven saloons, 28 boarding houses and 27 of what Elliott called, “manufacturies,” which would have been factories.

What Winnipeg’s new and old residents saw were opportunities ready to be exploited, which they pursued with gusto.

“Much of our destiny is in our own hands,” according to a September 23, 1874, Free Press editorial. “Let us not wait a moment. A good country in the hands of an active, enterprising people always overtakes prosperity ... Much may be done by individual effort, and the rest will follow.”