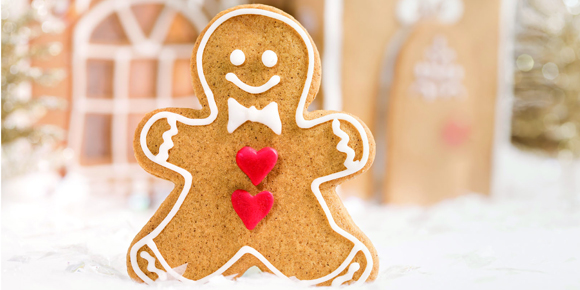 Run run as fast as you can!

Political correctness has invaded my supermarket

Gingerbread men have been around for centuries. In fact, although we don’t know why, gingerbread in

all its manifestations has long been associated with Christmas.

One theory suggests the spice turns the gingerbread men into the colour of the earth reminding us Adam was created from the dust of the earth. But Christmas isn’t about Adam, so that idea doesn’t really make sense.

Another suggestion relates to the folktale of the gingerbread man who ran away to escape being eaten. This story is apparently reminiscent of the Holy Family’s flight from King Herod.

However, The Gingerbread Man was published only in 1875, while gingerbread itself has been a seasonal treat since the 11th century.

The Gingerbread Man is the story of an escaping cookie who taunts his pursuers by calling, “Run run as fast as you can, you can’t catch me, I’m the gingerbread man.”

This tale is usually attributed to U.S. folklore, but fairy tales about fleeing goodies are found all over the world. The Pancake Boy is just such a yarn from Norway.

Russia has a similar story about a bun. And Chinese folklore tells of a runaway rice cake.

One certainty about gingerbread is that miniature houses made of this delicacy originated in Germany. Some researchers claim gingerbread houses began to be made following publication of Grimm’s Fairy Tales in 1812. Other historians insist Hansel and Gretel’s

gingerbread house is about something that existed

before that story was ever published.

Traditionally, gingerbread houses are displayed all through the Christmas season. Then, on New Year’s Day, they’re pulled apart and eaten as a tasty way of ushering in the New Year.

Originally, gingerbread referred to preserved chunks of the ginger plant’s roots. People ate these morsels like candy. Soon, cooks began to use this ginger for flavoring baked goods.

The ginger plant, Zingiber officinale, is native to tropical Asia, but has been successfully introduced

to other geographical locations. It is a reed-plant with knotty roots and it’s from these roots we get the ginger used in cooking, in ginger ale and in ginger beer. Most ginger in Canadian stores is imported from China.

Ginger is thought to have been introduced to Europe by the Armenian monk and saint, Gregory of Nicropolis, who died about AD 1010.

For centuries, gingerbread has been baked in the shapes of people, animals, and so on. From the beginning, the time of year influenced the shape, so gingerbread baked in the spring might be cut to look like flowers. For a long time, Christmas gingerbread was formed to represent the characters of the Christmas story — the Holy Family, the shepherds, wise men, angels, even the stable and its animals.

Gingerbread is Middle English, originally gingembras. In 1605, anything showy, insubstantial, or tawdry was called gingerbread. In 1700, it was slang for “money.” By 1843, ginger referred to “energy.” It still means, “pep; pizzazz.”