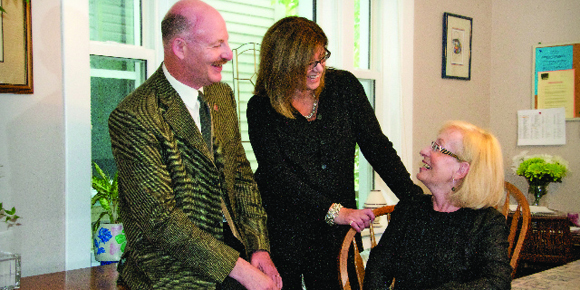 Making a difference in the community

A foundation grant is helping foster a love of reading and build all-important English literacy skills for newcomer adults and children. The Immigrant and Refugee Community Organization of Manitoba (IRCOM) is one of 11 grant funding recipients through the MREA Shelter Foundation in 2016, announced on Thursday, November 24, during MREA’s REALTOR® Week, held from November 21 to 25. This is the largest number of grants awarded in any single year, so far. IRCOM will be developing a beautiful sunny space into a library at their new Isabel Street location.

Another recipient, L’Arche Winnipeg, creates homes and builds community where people with developmental disabilities and their assistants can live, work and share their lives together as family 24 hours a day, seven days a week. A gift from the MREA Shelter Foundation will provide new flooring and carpets in five of the L’Arche homes, making the homes safer and healthier for both residents and their visitors.

“When we can help the less fortunate members of our communities by supplying bed bug covers, by providing a safe and warm place to sleep on a cold winter night, or a refuge for women and children to escape violence, we all win,” said MREA Shelter Foundation chair Brian Canart.

WinnipegREALTORS® Gimme Shelter fundraising social raises approximately $40,000 a year for the foundation’s annual giving. Brandon Area Realtors raised $9,000 at its Shelter Classic Golf Tournament in the summer, and $14,000 in the two years prior. Special events such as Win a Wine Cellar see Realtors raise thousands in a single evening, and the Close a Sale, Open a Door Realtor

Since 2008, the foundation has raised nearly $700,000 for shelter organizations across Manitoba. For information on the MREA Shelter Foundation, or to make a donation, visit www.mreashelterfoundation.com

“As a blind woman and single income earner,” said Greyeyes, “I face many obstacles which can seem like daunting barriers in life. Homeownership seemed like an unattainable dream and one I would never experience, however, the Manitoba Tipi Mitawa program gave me this incredible opportunity to buy my first home.”

MTM is a unique program that provides mortgage assistance to qualified indigenous families who meet stringent credit and employment stability requirements, and who complete money management, home maintenance and homeownership orientation educational sessions. MTM is a partnership between the Manitoba Real Estate Association, the Assembly of Manitoba Chiefs and the Manitoba government. Since 2009, 17 families have become MTM homeowners and have attained up to $30,000 in home equity growth. Not one MTM family has defaulted on their mortgage.

“Manitoba Tipi Mitawa’s strong track record of success demonstrates the power of partnership and what can be accomplished between government, the private sector, and exceptional people who have become MTM homeowners,” said Harry DeLeeuw, a Realtor and co-chair of MTM. “MTM provides a pathway to stability and financial independence, and helps break the cycle of poverty. Every time we partner with an MTM family, we’re helping to build stronger

All these initiatives proudly fall under the umbrella of REALTORS Care®, a guiding principle and a brand that celebrates and unites the great philanthropic work being done by Realtors, real estate boards, associations and broker offices across Canada.

According to the results of recent surveys conducted by the Canadian REALTORS Care® Foundation, the Realtor community has given over $91 million to charities from 2012 to 2015, alone.

We’ve seen great works here in Manitoba over the past year, which we proudly celebrate. From coat drives for children, to golf tournaments and fishing derbies for shelter,

to fundraisers that give underprivileged children the opportunity to enjoy summer camp.  The contributions Realtors make to support our communities is incredible.

See all the good works by Canada’s Realtors at www.crea.ca/realtors-care/

This year, Daniel McIntyre was selected as the 43rd

inductee in the fields of professional, public affairs and

Known as “Winnipeg’s Giant of Education”, McIntyre is considered a pioneer of Winnipeg’s public schools. During his 43 years as superintendent, from 1885-1928, the school system grew from eight to over 80 facilities. When he retired in 1928, there were nearly 1,000 teachers and 40,000 students.

Ian Wishart, Minister of Education and Training was in attendance at the induction to give congratulations to McIntyre’s descendants when the Citizens Hall of Fame bronze medallion was presented by WinnipegREALTORS® president Stewart Elston.

McIntyre’s bronze portraiture, created by local sculptor Erin Senko, can be seen at the Citizens Hall of Fame site

in Assiniboine Park, located at the southeast corner off Corydon Avenue.

DeLeeuw's significant contributions to creating stronger Manitoba communities are numerous and ongoing. Most notably, his advocacy and engagement in

Indigenous affordable homeownership led to the creation of the successful Manitoba Tipi Mitawa program, in which he still serves as co-chair.

DeLeeuw has served as president of the Winnipeg

This award is the highest honour bestowed by the Manitoba Real Estate Association political action committee to recognize the contributions of Realtors advocating for communities across Manitoba. It was created in memory of long-time former MREA CEO, Brian M. Collie.