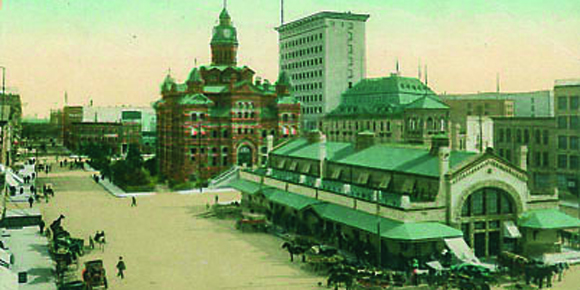 It may seem a little strange today, but the butchers’ stalls in the Old Market Square building were regarded as one of the city’s main attractions during the city’s early Christmas celebrations. Each holiday season, the city market, immediately west of Winnipeg City Hall at 510 Main St., where the Public Safety Building now stands, the butchers’ stalls were festooned with decorations described as festive and artistic in the city’s newspapers. The displays were meant to appeal to shoppers with an eye to purchase a good-sized turkey or goose, or a portion of beef, sheep or ham for their Christmas meal.

A December 22, 1900, article in the Winnipeg Tribune emphasized the extent butchers went to in order display their choice cuts. According to the report, Kobold & Co. at the city market attracted attention day and night

because of the “Magnificent electrical

“Over their main stall is a Union Jack studded with electrical lights in the colors of the flag; at each side of the flag is a star, in the centre of which the words ‘God Save the Queen’ appear; then underneath of the name of the firm ‘Kobold & Co.’ appears. Of course, the whole of the stalls are brilliant with light, there being 250 lights in all, with at least 500 flags, small and great, together with varied seasonal decorations.”

The founder of the firm was Leopold Kobold, a German immigrant, who came to Winnipeg in 1881. He died in 1905.

The December 24, 1896, Tribune asserted that the butchers had “surpassed themselves in their displays of meats, game and poultry for this festive season of the year.”

The articles about the city market in December conjure up images of Scrooge in A Christmas Carol, by Charles Dickens, shouting to the boy in the street to go to the poulterer’s and buy the prize turkey — the one that was as big as the boy.

“Epicures might pass from stall to stall,” reported the Tribune, “trying to choose the best of everything, but they would find it extremely hard to decide which stall furnished the best cheer for the Christmas table.”

Despite this claim, the newspaper did name Kobold & Sons (Leopold had four sons, and the name of company was variously Kobold & Co. or Kobold & Sons) and P.Gallagher & Sons of having the finest displays of meat and poultry, which was typified by the two retailers having won numerous awards during the year for their products.

Patrick Gallagher, the founder of the latter firm, came to in Winnipeg in 1880. Gallagher Street is named after him. He died in 1901.

Apparently, it was common for the butchers to display the names of the cattle when they ate prairie grass in the land of the living. A December 21, 1901,

Tribune article reported that “amusing epitaths” were placed on cards with each carcass, such as, “Weary Willie never worked and never will he,” or, “Dooley — Dead but not forgotten.”

All the beef in Kobold & Sons stalls had been raised on their own ranch at Maple Creek (Manitoba Free Press, December 24, 1896).

It should be noted that all the cattle was slaughtered and butchered on the spot in the city market, although the butchers had plants in other locations in the city to smoke and cure ham and bacon and render lard.

Also on display were “rows of sheep and hogs, in the best of condition, and well decorated, are strung along the top, whilst on the counter and back of it are the fattest of turkeys, fowls and young porkers just right for a meal” (Tribune, December 24, 1896).

Apparently, shoppers in those days were not cholesterol-challenged.

In a newspaper advertisement, Kobold & Sons, stated: “To our friends and patrons. We are not giving poultry away. But to show our appreciation for past favors we will give you Xmas poultry for about cost.”

P. Gallagher & Sons had on display “six beeves (English plural of beef; U.S. plural is beefs) which took the Gordon & Ironsides (a prize donated by livestock company) and which were considered by many good judges of stock, to be the finest beeves in Canada” (Tribune, December 24, 1896).

The beef was raised by D. Fraser & Sons of Emerson, Manitoba.

The Gallagher stall also had “a magnificent array of mutton, all fed on the western ranches. The choicest of the choice.”

Another stall was entirely devoted to turkey raised in Ontario.

“Last, but not least, is a stall especially dressed with their home-cured bacons and fresh lard. It is always safe to bet on the Gallaghers keeping up with the procession.”

Under the headline, Manitoba’s Pride, the Manitoba Free Press on December 24, 1896, urged all to make a visit to the city market, “which, as usual at this season, has assumed its holiday appearance, and they will be repaid for their trouble.”

The newspaper claimed it was a sight that couldn’t be surpassed in any other city in the world. “Here Manitoba speaks for herself ...

“On entering one is struck with wonder. Here is found tier after tier of beef, mutton, pork, poultry, etc., neatly arranged and tastefully decorated for the occasion.”

As with the Tribune, the Free Press singled out Kobold & Sons for particular praise, calling it the most “conspicuous stall in the market.” This assertion was  made “not only for the excellence of quality of the meats used in the display, and the tasteful way in which it is decorated with flowers and evergreens, but conspicuous for the pleasant and happy looks

on the countenances of the throngs of purchasers ranged up to the counters.”

Kobold & Sons occupied three stalls on the northeast corner of the Market Building. In total, the Market Building, which opened in 1889, boasted 18 stalls and other amenities for merchants. The city-owned building rented out the stalls to city vendors. Besides the butchers, there were sellers of produce, including vegetables, fish, eggs and dairy products. In effect, the market was the city’s first big-box shopping centre.

The city’s first market that was to be completed with the new city hall in 1876, but was plagued by construction delays. In part, the delays were the result of a city bylaw which made it mandatory to all Winnipeg’s butchers to relocate to the new building and the need to convert space into stalls for their accommodation. It became necessary to make an

addition to the original plans for the building to accommodate the butchers’ stalls.

The city market that opened in 1889 was above the demolished foundations of the first market. By this time, there wasn’t a mandatory city requirement for all butchers to locate at the city market — the burgeoning population made this impractical — but the city’s top butchers still were located in the market. The market was built three years after Winnipeg’s third city hall was opened and replaced the city hall built in 1875 that was marred by chronic structural problems.

“Decorating at Christmas time may appear to some as empty labor, but this is not so, and the results have proved that the substance, backed with the beautiful, will always carry the day,” the Free Press reported informed readers.

A year later on Christmas Eve, the same newspaper reported that the butchers’s stalls put on a “marvelous

display” at the city market.

“While viewing this display one must not loose sight of the fact that it is composed of the most of the products of this fair province, and with such excellent quality of meats, poultry, game, etc., that it produces along with the No. 1 products of the soil, there is material for making this city and province famous throughout the world.” If the display could be made in foreign lands there is no doubt the benefits derived thereby would be great.”

Further, the reporter urged Manitoba immigration agents to make good use of the displays by taking photographs and showing them in other parts of the world, “and, thereby help to secure a very desirable class of new settlers.”

It should be noted that the Canadian government was then promoting mass settlement of the prairies in the U.S. and Europe. And on the prairies, agriculture was the main drawing card for prospective immigrants.

Again, Kobold & Sons was singled out, which was again occupying three stalls in the market.

“Along the front and side, ranged like mammoth pillars, are the huge carcasses of the prize winners at the Winnipeg Industrial Exhibition of (July) 1897, six in all ... raised, bred and fed in Manitoba and Northwest Territories (Saskatchewan and Alberta didn’t exist at the time). The interior from one end to the other contains 37 carcasses of beef from the firm’s ranch in the west ... The sheep in this

display, 220 in all, are as fine as any ever seen in this city which was fed by Farmer Dude near Winnipeg.”

While the Free Press offered praise for Kobold & Sons, the Tribune made similar claims for Gallagher & Sons.

“Here are three or four of the finest possible beef carcasses bearing the red tickets of first prize winners and dressed with a skill that betokes the hand of the expert butcher.”

A year later, the same newspaper wrote: “To one unacquainted with the possibilities of meat as a medium of artist decoration, a visit to the market will

certainly be a revelation.

Unlike in past years, the stalls of Kobold and Gallagher were not the only ones mentioned.

“The stalls of J.B. Lauzon and Rocan & Co. (both firms had a long history serving the community) also deserve mention for they are likewise in holiday attire,” according to the newspaper. “One of the chief features of Messrs. Rocan & Co.’s display is a very large hog, which weighed 769 pounds when alive.

That year, Gallagher’s had imported two carloads of turkeys and geese from Smith Fall’s, Ontario. Although the Gallagher display of meat and poultry occupied three stalls, it grew to such quantity during the 1898 festive season that the firm had to annex the front of Scarf’s stall for their display of hams, bacon and lard (Tribune, December 24, 1898).

“Have you seen the city market? is a frequent question among holiday sightseers these days,” reported the newspaper.

(Note: Part 3 of the Heritage Highlights series of articles about the Red Knight jet crash in Gimli will  appear in the January 6, 2017, issue of the REN.)