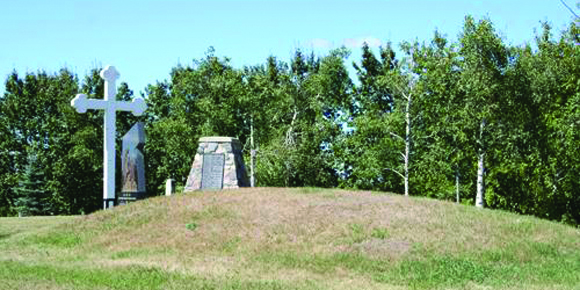 Illness among the Ukrainian children may have been initially hidden from

officials in Winnipeg by mothers who were anxious to continue their trip westward. The Shoal Lake Star of July 6, 1899, called this tendency by the mothers to hide ill children in shawls or other hiding places, the “Nane sick.”

What is known is that the immigrants passed a hasty inspection and were allowed to continue to Strathclair. A few sniffles, coughs and sneezes may have been regarded as less than serious, without realizing that scarlet fever is a bacterial illness that develops in some people who have strep throat. A bright red rash, another sign of scarlet fever on the face or body, may not have initially been present as an indication of the disease.

At the time, scarlet fever was a

common disease among children and

Dr. S.D. Cameron, a Winnipeg physician with experience in quarantining patients with infectious diseases such as scarlet fever, and toured the Riding Mountain district colony at the height of the epidemic, said the cause of the Ukrainian children’s high mortality rate was not the result of the disease’s malignancy, “but is due to exposure (to foul weather), fatigue, hardships of a long journey and the lack of proper

facilities for treatment,” according to a June 1, 1899, Star article.

Upon their arrival in Strathclair,  C.W. Speers, the colonization agent,

established a quarantine building, set up a hospital in a tent, and took over a small building that was to be turned into a morgue. He also summoned Dr. James Patterson, of the Winnipeg Board of Health, who was in Strathclair at 3 p.m. on May 11. In addition, he engaged Dr. Sinclair, the medical officer for the Municipality of Strathclair, and “started 14 Waggon Loads, the men walking to the Colony (at Burnett’s Lake, now Patterson Lake) today

By May 11, six more children had died and another four were sick with scarlet fever. The children were buried in the Bend Cemetery, a few kilometres from Strathclair.

In a May 11 memorandum to Frank Pedley, the federal deputy commissioner for immigration, Speers wrote: “There is a sentiment against the Galician people and I endeavoured to dispel this but when unfortunately with their advent comes some contagion that endangers the community the situation becomes very unpleasant. I am not easily intimidated and can meet anything reasonable and have done even this time in the interest of  the Dept. but I feel bad to think that these people were put on me at inception of a new colony in that condition and fully intend to  submit a very full report as soon as I get there (the new colony). I have had no rest for 3 days and have had many unpleasant things to do.”

Dr. Patterson wrote a report to

McCreary on May 11, which stated: “At Straithclair (now spelled Strathclair) I found Mr. Speers in charge with Dr. Sinclair as Medical attendant both were

doing everything in their power for the sick and to make all comfortable. The majority of the party had gone to their homes some 20 miles (32 kilometres) north. Those remaining were housed in a large comfortable barn with abundance of hay for bedding.”

In contrast, the June 1 Star said it was an “old barn, and had became a place of quarantine “due to a death which took place Saturday last (May 27).”

The same article noted that “the residents of Straithclair have now no fear of the sickness approaching among the children of the village.”

Indeed, all deaths from scarlet fever at Strathclair and the colony were confined to the Ukrainian settlers.

In the meantime, minutes of the Council of the Strathclair Municipality for May 11, shows a community still in the grip of fear for the safety of their own children.

The council then proceeded to immediately fire Dr. Sinclair, the region’s health officer, and appointed Charles C. Crawford in his place.

It was Dr. Sinclair who had wanted to see to the settlers’ best interests by keeping them in quarantine in Strathclair, instead of sending them north where no proper facilities were in place, which was a decision that cost him his job.

While staying in the barn, the settlers had to cook their meals outside over open fires. The obvious reason for this precaution was the presence of large quantities of hay in the barn posed a fire hazard. Thus, the barn in which they were sheltered was unheated.

It was Dr. Patterson who

ordered Speers to send those judged to be free of disease immediately north to their homesteads. It was a move he said that was designed “to lessen the risk of disease spreading amongst themselves and also perhaps to the citizens of the village.”

The journey to the colony site would have taken the better part of a day, according to Edward Kowalchuk (Shoal Lake Crossroads, May 6, 1989). He used historic weather records provided by John Randall, a climatologist at the Winnipeg Climate Centre, to determine the weather conditions encountered by the settlers on their trip north. When they started out on Thursday, May 11, 1899, the high was a relatively balmy 11°C. But on Friday, the temperature plummeted and on Saturday, the high was just -1°C and snow was falling.

“In the following days, highs averaged 7°C and it wasn’t until a week later that warmer weather returned.”

The baby of the Wasyl Swistun family  had died at Strathclair, but the parents kept it a secret so that they could bury the child near their future homestead. Barbara, the mother, was said to have held the dead baby in her arms as they travelled to Patterson Lake (Echoes, a history of the Oakburn

It was raining when the settlers arrived, so they were drenched to the skin.

A tent was set up with a stove at each opposing end. Starting a fire in the two stoves proved to be a difficult task in the absence of dry kindling. When a fire was finally lit, they ate a meagre meal and changed into dry clothing. Their bedding for the night was frozen ground.

160-acre plots of land for each settler’s family.

While staying in the tent, some children were found to have rashes on their bodies and a particularly virulent form of scarlet fever broke out, claiming more lives.

“Don Topolnicky, a pioneer of Oakburn, recalls that he was 15 years old when this plague struck. He and three other boys, namely Hilko Kotyk, John Shwaluk and Roman Hrynkiw, carried the bodies of children for burial everyday for two weeks. Close to the tent was a fresh cemetery of considerable size. There were new graves every day. The little graves were marked with wooden crosses. It was a pitiful sight to watch the weeping parents kneeling and praying by the graves of their beloved children” (The Past to the Present, a book compiled by the Parkland Ukrainian Pioneers Association, 1987).

On June 1, 1899, the Star reported that Dr. Cameron, under the instructions of Commissioner McCreary, took precautions to prevent the spread of the disease.

“He made a thorough examination of the colony and found several cases of undoubted scarlet fever. He has isolated all the families affected and put guards on all the roads leading to the camp to prevent intercourse with the settlement. A few deaths have occurred with his arrival but the disease is now completely under control and its ravages are almost spent.”

The June 6, 1899, Star related a reporter’s trip with Dr. Cameron to the colony. When they arrived at Burnett’s Lake (now Patterson Lake) where the first camp had been established, they saw “a small plot of ground fenced in and 15 rudely constructed crosses told the sad death amongst the Galician children. The poor wee things, tired out with a long journey; exposed to the hardships of camp life and deprived of suitable nourishment, were unable to combat against the ravages of what at any other time in favourable circumstances would not have been considered dangerous ...

“At this camp we saw, like St. Paul things that cannot be uttered.”

Those buried at Bend Cemetery, eight kilometres from Strathclair, were initially forgotten to history as there were no grave markers. But records were later found that showed two plots containing the bodies of the Ukrainian children — one with the bodies of eight and another with the bodies of five.

Fifty years after the May 1899  tragedy, the bones of the children who died at Patterson Lake were removed and reburied about 100 metres north of the original grave site. In 1990, the RM of Rossburn passed a bylaw declaring the mass grave along the shore of Patterson Lake a municipal historic site. A large cross and a mound marks where they were reinterred. A stone monument erected at the site by the Parkland Ukrainian Pioneer Association gives the names of those who perished.