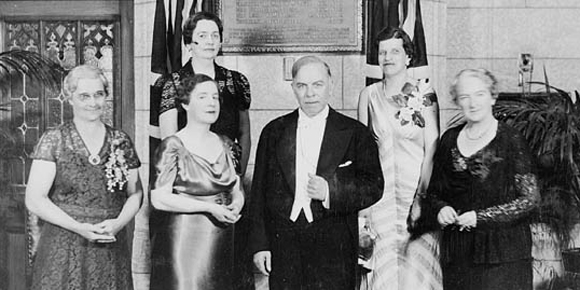 David Johnson, Canada’s Governor General, said: “October 18 will always be an important date in Canadian history. It was on this day in 1929 that women were finally constitutionally recognized as ‘persons.’”

By being classified as “persons,” women were no longer legally regarded as “objects” subject to the vagaries of men. Yet, the concept of women as objects is a trait still retained by some — apparently, those perceiving of women as objects includes U.S. Republican presidential candidate Donald Trump — despite the fact that in both the U.S. and Canada, this antiquated belief is seen by most as being beyond the pale in a modern democratic society.

“Because of the hard work of Emily Murphy, Louise McKinney, Irene Parlby, Nellie McClung and Henrietta Muir Edwards (known as the Famous Five),” Governor General Johnson said, “Canadian women have been able to participate fully in our country’s political life for the past 87 years. Their activism forever changed the course of Canadian history and made equality no longer just a dream, but a possibility ... I believe that democracy and freedom cannot fully exist without true equality between women and men.”

The fact that women were not “persons” under the law was brought to the attention of Emily Murphy on July 1, 1916, which happened to be her first day of sitting on the magistrate’s bench of the newly-created Women’s Court in Edmonton, Alberta. Defence attorney Earley Jackson, enraged at a stiff sentence given to a bootlegger client, shouted at the first woman magistrate in the British Empire: “You’re not even a person. You have no right to be holding court!”

Murphy asked Jackson to clarify his outburst. He replied that, “Under British Common Law, in a decision handed down in 1876, the status of women is this: ‘Women are persons in matters of pains and penalties, but are not persons in matters of rights and privileges.’ Therefore, since the office of magistrate is a privilege, the present incumbent is here illegally. No decisions of her court can be binding.”

Murphy noted his objection and then proceeded with the sentencing. Obviously, Murphy was quite taken aback, later telling a friend that her first day on the bench was “as pleasant an experience as running a rapids without a guide!”

Each time Jackson appeared in court before Murphy, he made the same objection, which caught on with other lawyers when they defended clients before the female magistrate. The practice even spread to Calgary where a ruling by magistrate Alice Jamieson was similarly challenged.

Jamieson gave prostitute Lizzie Cyr a six-month hard labour sentence, the maximum term of imprisonment under the Criminal Code. Defence attorney John McKinley Cameron blurted out, “I shall see that your decision is overruled!”

The Alberta Supreme Court ruled on the appeal that “there is ... no legal disqualification for holding public office in the government of this country on the basis of sex.”

The legitimacy of women judges was upheld in Alberta, but they still had to bring their case to the rest of the land, which was not as liberal-minded on women’s right to hold public office.

Recognizing that Murphy was a leader in the battle against systemic inequity, the Women’s Club of Montreal in 1921 approached then Prime Minister Arthur Meighen — the only PM ever from Manitoba — to reward Murphy for her hard work through an appointment to the Senate. Meighen replied that his legal department had told him appointing a woman contravened the British North America (BNA) Act so he refused to make the appointment. The act specified that only “quality persons” could serve in the Senate, and as British Common Law quite clearly stated, women were not counted among “persons.”

Amazingly, the need to be a “person” only applied to appointed government positions, such as the Senate. A woman after 1917 could be elected and serve in the House of Commons.

Before the “persons” case was even conceived, Nellie McClung prophesied in 1915 that: “The time will come when women are economically free and spiritually independent enough ... when women will receive equal pay for equal work and have all activities open to them ... when free men and women will marry for love and together work for the sustenance of their family.”

Canada’s first woman MP was Agnes Macphail of Ontario, who was elected in 1921 as a member of the United Farmers of Ontario (she held her seat until 1940). “In my very early teens I saw that men did a job in the world outside their home and women did not,” said Macphail. “At fourteen I turned it around in my mind this way: a woman has children — the boys do things and the girls marry and have children —and I asked myself: ‘Does this thing never end in a woman being a person and making a contribution in addition to, or in place of, having children?’”

The conflict between the sexes was rooted in the pervasive male thought at the time that a woman’s role was of nurturing — to raise a family and keep the home fires burning. By controlling the  political process, the woman’s role as a homekeeper was institutionalized.

Lord Sankey, Lord Chancellor of the Privy Council, announced the decision of the five lords, who described the exclusion of women from federal office as “a relic of days more barbarous than ours ..., and to ask why the word (person) should include females, the obvious answer is, why should it not?”

Newspapers throughout the British Empire ran banner headlines that declared: “Women are PERSONS!”

But as Governor-General Johnson asserted, just prior to the anniversary of “Persons Day” in Canada, the cause of women’s equality in society has come a long way, but there’s still more work to be done.