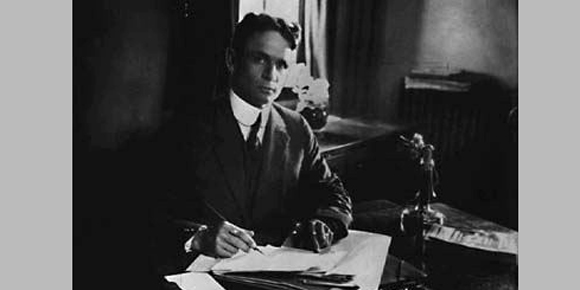 A section of PTH 10 from the International Peace Gardens to Riding Mountain National Park has been named by the provincial government after John Bracken, Manitoba’s longest serving premier (1922-43).

The first sign for John Bracken Highway was unveiled at a July 18 ceremony in Brandon, which featured members of the Bracken family from across Canada and the U.S. in attendance. Other signs are now being posted along PTH 10.

Even though Bracken is this province’s longest serving premier, most Manitobans living today are unfamiliar with the man who led the province through a period of tumultuous politics, the Great Depression and much of the Second World War.

“Bracken’s political career began dramatically with a midnight phone call in July of 1922,” wrote V. Nelles in a review of John’s Kendle’s book, John Bracken: A Political Biography. The call awoke the future premier, who was then the principal of the Manitoba Agricultural College.

On the other end of the line was W.R. Clubb, who was unknown to Bracken. Clubb said he was speaking on behalf of the United Farmers of Manitoba, which was more of a protest movement than an organized  political party. In fact, the UFM was founded on the belief that political parties were the devil in disguise, which was accepted as fact by Bracken.

The UFM had been overtaken by surprise when they won 24 of the 55 seats in the Manitoba Legislature and were required to form a minority government, but lacked a leader. For his part, Bracken had to that point shown no interest in politics and had no previous experience in the field — he didn’t even vote in the general election that brought the UFM to power. In effect, Bracken would fall into power rather than seek it out.

Bracken was one of two other candidates interviewed for the job the following day. When Thomas Crerar and Bob Huey turned it done, he accepted. A byelection was called for The Pas riding and the new UFM leader won, setting the stage for a long period of so-called “non-partisan politics” that became known as “Brackenism,” which lasted long after he had moved to Ottawa in 1943 to take over the leadership of the federal Conservative Party. When taking over the federal party’s leadership he insisted that “Progression” be added to the party’s official title.

In his book,  Politics in Manitoba: Parties, Leaders and Voters, Christopher Adams wrote that the farmers swept aside the cozy Liberal-Conservative arrangement and introduced to Manitoba its third way in 1922. Once in government and with John Bracken as their new leader, the UFM transformed itself into a solidly based coalition of elected representatives with continual backing from urban business leaders and rural farmers. At the time, seats in the Manitoba Legislature were heavily skewed in favour of rural voters. The UFM would become the Progressive Party (a label already used by farmers at the national level as well as by the United Farmers of Manitoba’s Winnipeg branch ) and then Liberal-Progressive upon being merged with the provincial Liberal Party in 1932.

One could say that Bracken’s leadership style was an outgrowth of his personality and background. According to Gerald Friesen (The Canadian Prairies: A History): “Bracken was a no-nonsense farm boy from eastern Ontario who had become an agricultural extension officer and eventually a professor of agriculture. He had absorbed the strict teachings of a Methodist household and combined them with an unusual flair for organization and exposition, on the one hand, and for instilling loyalty and a sense of common purpose, on the other.”

Bracken was described by Kendle as a bland, colourless man of few words. He held strong views that would today be described as fiscally conservative and disliked anyone who sought a “handout” from the government. In turn, Bracken didn’t seek handouts from the federal government and his mantra was “pay-as-you-go” to balance the province’s fiscal  books. He was more of an administrator than a politician. He also held the labour movement in disdain and saw the leaders of the 1919 Winnipeg Strike as communist-inspired agitators.

Despite the onset of the Great Depression, his fiscal policies remained unchanged. The jobless rate reached 25 per cent in Manitoba throughout the 1930s, but relief was hard to obtain — for single adult men it was almost impossible.

When over 350 disgruntled farmers from the Interlake facing potential eviction from their land, marched to Winnipeg in 1932, Bracken told them, “You have asked to be given everything and to pay for nothing.” After a meeting on October 17, 1932, Bracken promised the delegates representing the farmers that law and order would prevail in Manitoba and there would be no “give aways.”

On November 19, 1932, the lack of progress on the farmers’ demands resulted in the “Arborg Tax Revolt” during an auction sale of 165 properties by the RM of Bifrost. The reeve was assaulted and the sale disrupted, but it did go ahead on December 14, when 125 of the properties were sold for tax arrears ranging between $70 and $125.

One concession to the widespread unemployment made by Bracken was that the province paid 10-cents a day to each unemployed man to clear bush and build roads and facilities in the Whiteshell Forest Reserve in order to create a cottage area for Manitobans.

A scheme the Bracken government supported was a back-to-the-land movement — families in relief would be moved to new farms in rural Manitoba. It was a scheme supported by the Winnipeg Chamber of Commerce, but it didn’t go over well in rural areas. “Sending hosts of people into remote farming districts evokes the risk of creating great rural slums,” the government was warned.

In the 1940s, and with a wartime coalition encompassing Liberal-Progressives, Conservatives, the Co-operative Commonwealth Federation (CCF), and Social Credit, under Bracken, candidates continued to run in elections under distinct party banners, yet were also expected to declare whether or not they were supporting the governing coalition.  The effect was that party distinctions became less than clear (Adams).  It was a situation that remained unchanged until Brackenism ran out of steam and Manitobans began to have higher expectations from their provincial government, which resulted in Duff Roblin and the Conservatives coming to power. The Liberals, having lost their “Progressive” moniker after 1959, fell into long-term decline. Until he went into federal politicals, Bracken was the glue that held the “Liberal-Progressives” coalition together — few politicians were willing to take him on — and he kept the peace by taking members of other parties into his cabinet.

Among his accomplishments was convincing the federal government to hand over control of natural resources in their provinces to the governments of Manitoba, Saskatchewan and Alberta.