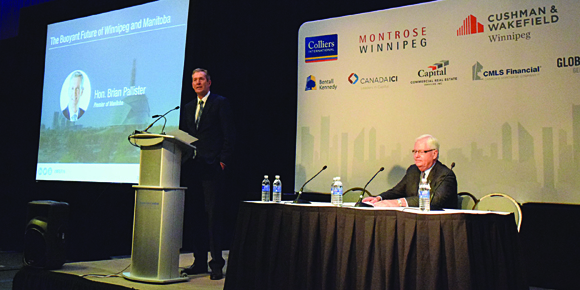 Some new developments on the political front

These days, there is no lack of issues to discuss at any level of government. We have just heard a throne speech from the new provincial government under Premier Brian Pallister, which was much along the lines of the platform of the Progressive Conservatives (PC) during the recent election campaign.

But now there’s a solid majority government and strong mandate to back up the PC’s promises. In fact, the mandate letters, which outline the priorities and responsibilities each of the 12 ministers in the new cabinet have issued, will be made publicly available. This is a practice started by the federal government and certainly helps bring more clarity to each minister’s role within government, as well as makes them more accountable for delivery of their assigned mandates.

One primary issue to tackle is the extent of Manitoba’s current financial deficit. Finance Minister Cameron Friesen, who will be delivering his first budget on May 31, provided an update this week, which indicates the deficit is higher than the $773 million announced at the end of March. In fact, the estimate now for the deficit is nearer to $1 billion.

A new wrinkle in the throne speech that wasn’t among the PC’s campaign promises was the announcement to develop a climate action plan. The plan will be interesting in light of what some other provinces are doing, including Ontario which just announced an ambitious $7-billion climate action plan.

At the local level, Winnipeg Mayor Bowman confirmed his intention to go ahead with what he calls a growth fee (many consider it another tax) on new subdivision developments.  The premise here is that new developments do not pay its fair share of the associated infrastructure costs, thus adding to the city’s structural operating deficit.

While hiring a consultant to prepare a report showing how new growth is impacting the city’s cost of servicing the new infrastructure, the mayor is on record supporting this proposal. Having said that, he is keeping the door open for discussion, including with the development industry.

WinnipegREALTORS® is concerned about this proposal — not only for its members dealing with new home buyers — but with the implication of increasing the price of existing homes in Winnipeg. If you push new development outside the city, therefore, have less housing choice and supply within Winnipeg, house prices will go up and become less affordable.

Next week, our political action representatives will be meeting with local MPs to impart important information from the Canadian Real Estate Association (CREA), the national body which represents 110,000 REALTORS® from across the country.

CREA's Political Action Committee (PAC) consists of Realtor volunteers assigned by their board or association to represent the Realtor community in discussions with the federal government.

During the parliamentary break week of May 23 to 27, PAC Reps will be meeting with their constituency MPs to discuss the local and national housing market, as well as CREA's 2016 recommendations for the Home Buyers' Plan (HBP).

With both the Liberal and Conservative parties including some of CREA’s recommendations in their election platforms last fall, CREA is optimistic the PAC reps will have productive meetings with their local MPs.

To date, the HBP has helped over 2.8-million Canadians achieve their dream of homeownership since its inception in 1992.

CREA is asking MPs to get behind stopping the erosion of the HBP’s value through indexation, and is also asking to extend eligibility for the HBP to Canadians going through a significant life change.

Indexation is an established practice. TFSAs are indexed incrementally to the Consumer Price Index (CPI) and rounded to the nearest $500. Indexing the HBP is an affordable way for the federal government to support first-time home buyers as homeownership rates are falling amongst individuals aged 25 to 35.

As for life changes, vulnerable populations and individuals in life transitions may not be able to continue to own a home without assistance. Life changes may include job relocation, a marital breakdown, death of a spouse or the need to accommodate an elderly family member.

Using the HBP to make a larger down payment, helps buyers reduce or avoid CMHC or other mortgage insurance fees and, therefore, build up home equity sooner.