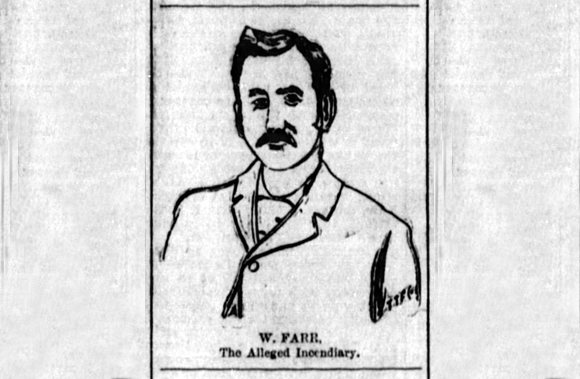 A surprising turn of events occurred when two letters sent to the Manitoba Free Press professed that someone other than William Farr was guilty of setting the fire at his Ross Avenue home. The last letter received by the newspaper was purported to be written by the guilty party, confessing to the crime.

But all the evidence presented in police court seemed to point to Farr as wielding the pen in both instances, although the handwriting experts used were bank employees more noted for determining if cheques were forged.

The contents of the letters weren’t read aloud at the Winnipeg Police Court, corner of King and James, in June 1895, but would later be made public during a subsequent trial, since the police court wasn’t the end of the proceedings against Farr.

Police Court Magistrate Peebles asked Farr if he had anything to say about the charges against him, according to the June 29, 1895, Manitoba Free Press.

“I have nothing to say, except that I am not guilty,” was the defendant’s reply.

“We do not, Your Worship, propose to put in any evidence at this time, reserving our case for the trial,” added his defence attorney, Horace Crawford.

“Then it is my duty to commit you, William Farr, to the next court of competent jurisdiction for trial.”

Farr was returned to jail to await his trial in the Manitoba Court of Assizes, which commenced on November 6, 1895.

When Farr appeared on charges to commit arson and arson with attempt to murder, as well intent to injure his landlord (deprive him of property) and defraud his insurance company, the small courthouse was filled to its capacity of between 150 to 175 people, according to the November 12, 1895, Tribune, which indicated the widespread public interest in the sensational and headline-grabbing case.

“Finally two policemen open the door wide enough for a man to get in. He is squeezed through by the crowd behind without moving hand or foot, and unable to take off his hat till he gets in. So they are forced through one at a time, while the crowd behind hoots and pushes in a vain attempt to get closer to the door. The scene, just as the door is shut is a bewildering one. The foremost man, willing to obey the police, but pushed forward with the weight of a ton or so, runs great risk of getting a rib broken between the door and the next neighbor. All that can be seen from within outward is a solid lump of humanity with a froth on top, composed of hats, hands, arms and policemen’s clubs.”

Among the first witnesses was Mabel Farr, the 15-year-old daughter of the accused. She described the events that occurred during the fire, including how the fire was extinguished by her mother with help from their neighbours.

She said that her father treated her kindly and was a good provider.

Mabel said her mother had since gone to Vancouver with her three other siblings to live with relatives. Ironically, Ellen Farr and three of her four children were in Vancouver during the same period of time that her husband was in hiding in B.C., following his escape from the Winnipeg Police jail. But there was no evidence provided to show she knew about her husband’s whereabouts while residing in Vancouver with her sister.

At the trial, it was discovered that Ellen Farr had sold the contents of the Farr household at auction on April 26, raising $210 for a piano and another $392.75 for other items.

Most of the other testimony from witnesses was a retelling of what was said at the earlier police court hearing, including some of what Margaret Robertson had testified, although she did provide additional information to the assizes court.

What was different was that the contents of Farr’s letters were read in court. In the letters, Farr professed his love for his “dear Maggie.” In one letter, Farr wrote that he would send for Robertson once he was gainfully employed in Hawaii. He also said he had no desire to meet with “Mrs. F.,” while she was at the West Coast.

Farr said in the letter that he was eagerly waiting for her so that they could get married.

In another letter, he told of meeting the Vancouver chief of police and a city detective (presumably Sargeant V.W. Haywood) and brazenly having tea with them in a Hastings, B.C., hotel. “I was talking to them about things in general and they never recognized me as the man they once looked for the one day I was in the city (Vancouver) ...”

Earlier, Haywood had confirmed that he first observed Farr at the hotel, although he didn’t mention having tea with the accused. In a June 21, 1895, Manitoba Free Press article, Haywood’s refuted Farr’s claim that the Vancouver Police weren’t aware of the desire by the authorities in Winnipeg to have the man returned to the city for trial. They already had been alerted by Winnipeg Police that Farr may have fled to the vicinity of their jurisdiction.

“I did not make any attempt to arrest him for some days after locating him, because I learned that he intended coming on to Vancouver (from Hastings). Meantime, I communicated with (Winnipeg Police) Chief (John) McRae who, convinced that I was on the right track, forwarded me the necessary papers to make an arrest.”

Farr boasted to Robertson in a letter that he also “walked into the (Vancouver) police office in a mistake and (they) never notised (sic) me.”

Actually, Farr’s boasts were another example of how deluded the man had become in his imagined ability to continue escaping justice. By having tea with the two police officers, he was simply drawing attention to himself, which led to his eventual re-arrest by Haywood in Vancouver Harbour, while trying to skip the country by boarding a ship bound for Hawaii. Newspapers reported that Farr had been seen several times by the police, and all Haywood was waiting for to take the escapee into custody was a warrant for his apprehension issued by a Winnipeg magistrate.

Haywood told the Free Press reporter he had been carefully shadowing Farr from Hastings to Vancouver Harbour, finding Farr aboard the Australian ship bound for Honolulu. With warrant in hand, Haywood went into action and Farr was arrested.

The only glitch Haywood experienced after the arrest of Farr was an intervention by Alderman W.H. Gallagher, who was accused by some newspapers of using his public office in an vindictive manner against the police department —  the Vancouver Daily World referred to him as a “despot.” The Vancouver alderman told Haywood (sometimes referred to as Heywood) that he had no right to have Farr sent back to Winnipeg.

“This was evidently done with a view to making trouble for the sargeant,” according to the June 17, 1895, Vancouver Daily World, in his capacity as chairman of the police board. Apparently, Gallagher had it in his mind to sack the sargeant along with the chief of police and another police officer because of a personal grudge against the three men. In fact, Haywood was under suspension from his duties due to allegations levelled against him by Gallagher, as were the other police officers. Gallagher had launched an inquiry, accusing the three men with being unfit for duty because of alleged corruption.

“In the matter (arrest of Farr) I acted in a private capacity, for having had some little difficulty with the chairman of the Vancouver police committee, I was not at the time occupying my position as police sargeant,” he told a Manitoba Free Press reporter in an article that was published on June 21.

Haywood returned to the Vancouver jail with the warrant for Farr’s arrest and a local magistrate ordered that the prisoner had to be remanded to Winnipeg, despite the alderman’s protests. In order to take away Farr, Haywood had to physically push aside the indignant alderman.

“It was only by force that I kept Farr under arrest and got him on the train for Winnipeg ...,” Haywood told the Free Press reporter.

At a subsequent Vancouver city council meeting, Gallagher maintained that he was acting within his rights with regards to Haywood and Farr, saying the sargeant had only produced a “slip of paper with a memo on it in the warrant book.” And that Haywood was no hero for engineering Farr’s arrest, as reported in local newspapers. He claimed that anyone could have accomplished the deed.

Despite the overwhelming public praise he gained for arresting the fugitive Farr, Haywood was forced to abandon any prospective of future employment with the Vancouver Police — he became a private detective — although a suit for wrongful dismissal against the city went in his favour.

In his letters to the Free Press, when he attempted to place blame on someone else under false names, Farr, in the guise of being a friend, said the evidence compiled by the police wouldn’t stand up in court.