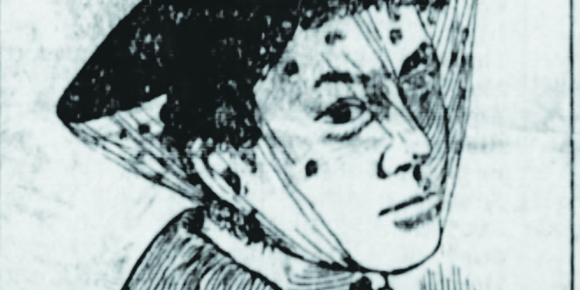 Even his Ross Avenue neighbours believed that William Farr was innocent of attempting to burn down his home in the early morning hours of April 13, 1895. T.C. Jones, who had been awoken by the cries of Ellen  Farr the morning of the fire, which was proven to be arson, said it would be “an enormous contradiction” of his impression of the man to find out that he was guilty of the crime.

While a Winnipeg Tribune reporter was unable to directly interview Mrs. Farr, who was “ill” — no doubt brought on by the accusations against her husband — and confined to bed for two days, he did manage to talk to a “lady who has been intimate with the family for many years, and who lives in the same terrace” at 486 Ross Avenue.

The woman had been in contact with Farr during her illness, and related that the woman did not believe her husband had set the fire. She claimed that the reason “so much talk has started is that Mr. Farr is a man of such generous nature and open-heartedness that he cannot bear to see people in trouble without helping them. Some persons, who had seen him thus kind, had fancied an evil reason ...”

The reporter was told that the couple had been happily married for 15 years and had four “dutiful” children. As well, there was no financial reason for Farr to take such a course of action against his wife and their children.

It was explained by the Farr supporter that he was constantly hearing bells ring, since he was becoming deaf due to his work in the Canadian Pacific Railway (CPR) yard as an engineer, so it was not surprising that he told others on the morning of the arson that he heard fire bells ringing.

The question of the younger woman seen in Farr’s company was among the topics of public gossip. The young lady — then unnamed, but later revealed to be Margaret Robertson, although newspapers continually mistakenly referred to her as Margaret Robinson; also in letters sent to Farr and presented in a future court case, she signed her name as either M.E. Robertson or Maggie Robertson  — told the police before Farr’s Saturday morning escape all she knew “about the case.” She informed the police that Farr had initially told her that he was a widower and that his sister-in-law was keeping house for him, but when she visited him in his cell, he told her that he was married.

The day after Farr’s escape from custody, the headline in the Tribune read, No Trace of Firebug Farr. A subhead claimed, Disappeared as Completely as if the Earth had Swallowed Him Up. An April 16 Free Press headline asked, Is Farr Far Away?

By this time, more and more people, although not all, were ready to admit Farr’s guilt. Even some of his friends began to refer to Farr as a “slick individual,” and that all the circumstantial evidence compiled pointed toward his guilt.

One item of evidence released by the police was that a shoe print found in the lane corresponded to a shoe worn by Farr while he was in custody.

In addition, Farr was also alleged to have attempted to purchase a large quantity of coal oil.

Joseph O’Connor, employed by coal oil seller “Mr. Genie,” said: “On Thursday afternoon when I was at Colclough’s between 2:30 and 3 o’clock, Mr. Farr came to me and questioned me as to the prices of the coal oil. I told him we sold it at 20c(ents), 25c and 30c and then he went on to ask me which was the best for burning: was the 20c any good?” reported the Tribune on April 16.

O’Connor said he took an oil cart to Farr’s house shortly after the terms of the sale were completed. At the house, the oil was poured into a can capable of carrying 2 1/2 gallons, but Farr was only given two gallons, which was the amount specified in their original agreement.

A CPR engineer told a Free Press reporter that there was one thing that Farr could use to prove his innocence, which was that the men working in the yard could account for his whereabouts for all but 15 or 20 minutes. That didn’t give Farr enough time to reach his house and set the fire, he added.

But the same reporter wrote that Farr was absent from his engine for more than an hour and he wasn’t able to locate anyone who saw him during that period of time. Furthermore, Farr was alleged to have told his wife that he couldn’t account for that hour and that was why he wasn’t going to stay to “fight it out.”

Robertson told the Tribune she had known Farr for five years and first met him in Rapid City. She said Farr had taken her to the theatre, skating rink, church and for evening walks in Winnipeg.

Robertson said she had heard that Farr was married, but didn’t believe the reports. To disguise his marital status, Farr had told her the lady he was living with was his brother’s wife and that he was taking care of the family. The young lady then commended him for looking after the family.

She told the newspaper reporter that it was understood that she and Farr would be married “next summer.”

The affair with the young lady and the double life he led also convinced most that Farr was at least guilty of the crime of arson.

The whereabouts of fugitive Farr wasn’t known until two months later. Winnipeg Police Chief John McRae was convinced that Farr was on the West Coast and that was where he had indeed fled.

From the information gathered, Farr made it to Brandon the day after his escape and remained in hiding there until he made his way to British Columbia and then on to Washington State, although he was found hiding out in Vancouver.

A June 16, 1895, telegram to Winnipeg from a Free Press correspondent said that Sergeant Haywood, of the Vancouver police, had been on Farr’s trail for some time, acting on instructions received from Winnipeg police.

“It is claimed that several times he was located, but with marvelous foresight, amounting almost to intuition, he flitted from place to place to avoid arrest.”

Haywood was told by the Winnipeg authorities: “If you’re sure you are on Farr’s track don’t play with him; he’s a particularly shrewd man, and will fool you if you give him the slightest chance.”

While watching the boats in the Vancouver Harbour, Haywood discovered his man “just in the nick of time,” since Farr was onboard the Australian steamer Warrimoo scheduled to leave in five hours for Honolulu, Hawaii, where his sister lived. Haywood slipped onto the steamer, looked at a photograph of Farr and found the wanted man crouching in a corner of his cabin. He had signed his name on the steamer passenger list as J.G. Lake.

Farr looked haggard and 10 years older than the photo, but Haywood believed he was the man sought by the Winnipeg police. When arrested, the man admitted to being Farr, but professed to be innocent of setting the fire to his house in Winnipeg. Farr said he avoided arrest because the evidence appeared to be “very strong against him.”

“Whilst your correspondent is pledged to secrecy as to the details, he is privileged to say that Farr made confessions to Sergt. Haywood (Haywood later said Farr at no time while in his custody professed his guilt to the charges against him in Winnipeg) after being warned to hold his peace. In fact he kept nothing back and answered the questions put to him ... On being asked how he evaded the police so long he said he had friends on the railroad.”

The same friends gave him $50 that Haywood found between the pages of a Bible Farr had in his pocket. Farr also said he had been in B.C. for a month, travelling from place to place. He was at Nanaimo for a while and hid between Hastings and Vancouver for another couple of weeks.

The Brandon Weekly Sun on June 25, 1895, expanded upon Farr’s whereabouts while in B.C., reporting the man had worked in a mill in Hastings under the name Edington. The newspaper further reported that Farr made his way from Winnipeg to Calgary in a train cattle car and from there to the West Coast in a train car loaded with machinery.

Farr also told Haywood that he used the name W. Edington (Eddington in some accounts) and a number of communications in his pocket were printed with that name.

Haywood’s arrest of Farr with a Winnipeg warrant in hand was called, “a brilliant capture,” in the June 17 Vancouver Daily World.

Perhaps known to Farr, though not reported, was that his wife was in Vancouver at the time of his arrest. While in the West Coast city, she continued to protest that her husband was innocent of any crime.

“The whole case is a mysterious one,” according to the Brandon newspaper, “and it remains for the authorities to unravel the mystery.”

Manitoba Provincial Police (MPP) Chief Elliott was dispatched to pick up Farr and return him to custody in Winnipeg.

On June 20, Farr arrived at the CPR Station in Winnipeg accompanied by Elliott, Haywood and MPP Constable Cox, while other officers were waiting on the platform ready to whisk Farr off to the Winnipeg police station at the corner of King and James.