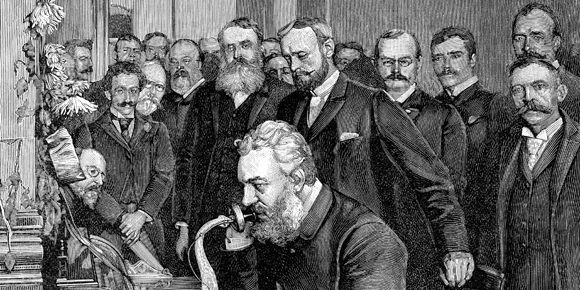 Everyone knows the telephone was invented by Alexander Graham Bell

Everyone knows the telephone was invented by Alexander Graham Bell (1847-1922) in 1878. But he isn’t the one who invented answering that phone with, “Hello.”  In fact, his way of answering was, “Ahoy!”

Bell stubbornly refused to use, “Hello” and it’s widely believed this refusal arose because his rival, Thomas Alva Edison (1847-1930), was the one who popularized the “Hello” greeting.

That Edison was the first to respond to a phone call with “Hello” is true, but whether that’s the reason for Bell’s antipathy is unknown.

Today, the telephone greeting, “Hello,” is practically universal. No one now picks up a phone and says, “Ahoy!”

Hello predates the telephone by centuries although the modern spelling, pronunciation, and meaning go back only to about 1854. Oxford’s earliest reference to such a greeting is 1568 with the word, halloo. Halloo, however, had nothing to with greeting people. It was a shout urging dogs to the chase. It wasn’t until 1606 that halloo was used to attract human attention.

The spelling had changed to hullo or hulloa by 1857 and was, by then, a way of getting someone’s attention. But, already, three years earlier, the variant spelling, hello, had surfaced.

Fowler says there are at least “a round dozen” forms of this word. He adds, “There are a bewildering array of spellings and stress patterns with this greeting word.” He mentions hallo, halloa, halloo, hillo, hilloa, holla, holler, hollo, holloa, hullo, and hello. He notes that while hallo is more common in British English, hello is preferred in American English.

Johnson’s 1756 Dictionary of the English Language doesn’t list hello, hallo or hullo. As well, Johnson doesn’t relate the halloo he does list to humans. Rather, he tells us halloo is a Saxon word used to encourage dogs.

This connection with dogs is still seen almost a century later in the 1832 song, “D’ye ken John Peel?” In that song, the chorus specifically links halloo to dogs and hunting: “For the sound of his horn brought me from my bed,/And the cry of his hounds which he oftime led,/Peel’s ‘View, Halloo!’ could awaken the dead,/Or the fox from his lair in the morning.”

In modern fox hunting, the sighting of the fox is still proclaimed via a shouted, “Halloo!” or “Halloa!”  It must be noted, however, that fox hunting has been outlawed in England since 2005. Nevertheless, a modified form of hunting persists although the law says foxes must be killed by hunters, not by dogs.

Hello has also entered slang. In 1950s U.S. campus slang, it became a general exclamation of surprise/disbelief. That is, it meant, “I don’t believe this!” or, “What’s going on?” or, “This is bizarre.” As well, in the days of telephone operators, such an operator was known as, “The Hello Girl.”

The word, hullabaloo (1762) grew from hullo. Hullabaloo is a “rhyming duplication” of hullo and means, “tumultuous noise; uproar; clamorous confusion.”

Note: Ken, as used in the song, means, “to know; to recognize.” Ken, chiefly Scottish, is found also in some Northern English dialects.