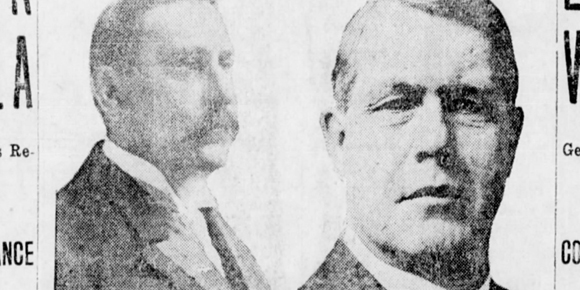 The year of the three mayors — Part 2

What a difference a day can make. On January 2, 1917, David Dyson was sworn in as the new mayor of Winnipeg. But on January 3, it became increasingly obvious that his one-day tenure in the city’s highest office was teetering on the brink of being overturned as a recount conducted by County Court Judge Robert Hill Myers progressed.

Dyson had defeated Alderman Frederick Davidson by just 18 votes once the ballots were counted on December 15, 1916. But supporters of Davidson asked for and received a recount due to the closeness of the result.

The potential overturning of the election was not immediately suspected. After Myers had counted the votes from the first 10 ballot boxes in the city council chamber on January 3, Dyson’s majority increased by one over Davidson.

“The stray ballot was found in the first box opened,” according to a Winnipeg Tribune same-day report. “It was located to a Ward 1 booth. The rejected ballots were found to be correctly discarded.”

“Who’s the mayor of Winnipeg?” asked the city’s dailies as the recount continued.

After the counting of votes in 50 of 96 ballot boxes, Dyson’s lead was cut to eight.

“Scores of errors were found in the work of the returning officers,” reported the January 4, 1917, Tribune. “Virtually no distinction was made by the majority of elections officers between spoiled and other rejected ballots. Discarded ballots were frequently ignored, while some of the records show a fewer number of ballots registered in the books than appear in the (ballot) boxes. In addition the mistakes in recording are creating a vast amount of work for the judge and his assistants.”

Following the early round of counting ballots, it was predicted among the Davidson supporters that the Dyson victory on December 15 would be overturned in favour of their candidate. It was a prediction that was upheld as the counting continued.

With 23 ballot boxes still to be counted, Davidson had an 18 vote lead over Dyson. There had been a problem with Ward 4, Poll 24, A to L.

“It was found that the names opposite the figures enclosing the returned had been switched,” reported the January 5 Manitoba Free Press. “It made a difference of 28, for taking 11 away from Dyson it added that number to Davidson and changed the entire aspect of affairs. This poll was reached just before 3 o’clock yesterday afternoon. At that time Dyson was leading by 19 votes. The figures were given on the envelope were Davidson 18, Dyson 62. When the judge counted the ballots the figures were reversed. An examination of the deputy’s return sheet inside the envelope showed the correct figures. This poll was in Victoria School.”

An examination of rejected votes from the previous day’s recount gave Davidson one vote and Dyson two, reducing the former’s total to 18. A few minutes later, another poll boosted Davidson total by two more votes, and his lead was up to 20 votes over Dyson.

“What the outcome will be is problematic. A considerable amount of carelessness or ignorance on the part of the deputies (returning officers) has been disclosed, and there is outside talk that this, taken in conjunction with the charges made in the press over the signature of A.A. Heaps (see last week’s Heritage Highlights article), will be used as grounds on which to protest, if not the entire election, at least the mayoralty contest.”

On January 5, the Tribune announced that Davidson had been elected mayor following the completion of the recount. He had a majority of 20 over Dyson.

In the afternoon, Dyson demanded a second recount of the ballots for the “entire civic election of Dec. 15, according to J.W. Morley who asked for a recount of the mayoralty votes in the interests of Alderman Davidson.”

Such a recount would entail the elections for mayor, aldermen, the board of control and school trustees.

The newspaper reported that the last day of the recount revealed few mistakes being made in the recording of ballots on December 15. The North End returning officers had made fewer mistakes than those recording votes for the southern wards.

City clerk C.J. Brown told the press that the man who made the worst error — at Poll 24 — was one fo the most experienced returning officers. “He (Brown) concluded by saying that a mistake, such as reversal of the figures as was made, is one of the simplest which can be made in an election, taking into consideration the speed with which the men must move in order to get the figures into the city hall for tabulation at the earliest moment.”

The Tribune explained that it was the third recount in a mayoralty election. The first recount was in 1887, when Lyman Jones was finally declared elected over J.H. Pearson.

The second recount occurred in 1895. Alderman Alexander McMicken was declared elected after the ballots were counted, but Thomas Gilroy believed a recount would decide the election in his favour. When the ballots were recounted, Gilroy was elected by a small majority.

“Year after year since, the voting has left a sufficiently large majority for the successful candidate that no question was raised that a recount was necessary.”