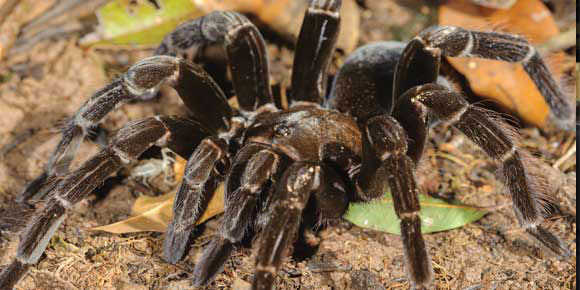 One Welsh loanword, bwg, gave us the English word, “bug.” In Welsh, bwg means, “hobgoblin; ghost.” Adopted into Middle English as bugge, it retained that hobgoblin meaning until the early 1700s.

Bug hasn’t been used that way for centuries although both bugbear and bugaboo carry elements of that meaning. The second dictionary definition of bugbear is, “object of irrational dread.” Bugaboo, in addition to being, “a recurrent or persistent problem,” is also, “an object of obsessive fear.”

A bugbear (1580) was thought to be a ghost disguised as a bear. A bugbear was invented specifically to frighten children into good behaviour. William and Mary Morris suggest unsophisticated adults of that time probably also feared the bugbear (Dictionary of Word and Phrase Origins, 1967). By the start of the 17th century, bugbear meant “irrational terror,” a meaning still current.

The ending boo, also from Welsh, is from the word bw, an exclamation to frighten children. This bw is possibly the origin of the 19th century bogy/bogey. If so, it’s the ancestor of today’s “bogeyman.”

Bug, meaning  “creepy-crawly” (17th century), may have descended from the Old English budd (beetle) and been modified by the loanword bugge. This idea is merely conjecture. No evidence to support it exists.

The noun bug has assumed the modern meaning of a device for secret listening, for spying. This meaning arose in 1910. With the advent of computers, bug began to be used for, “a defect in the code or routine of a program.” Thus: “My computer has a bug.”

The verb, “to bug,” has related meanings. It can mean, “to equip with a concealed electronic listening device,” or, “to annoy; to pester,” or, “to prey on; to worry.”

The “Bug Bible” is the nickname given the Coverdale and Matthews 1535 translation of the Bible because, in Psalm 91:5, we find bug used in its original sense of something to fear. The King James Version of this same Psalm says, “Thou shalt not be afraid for the terror by night.” The Bug Bible translates that passage this way: “Thou shalt not be afraid for any bugs by night.”

Bug, and expressions containing bug, have lent themselves to a host of slang catchphrases — more than 125 of these in American Slang. Many are unfit for polite company. Here are a few of the milder ones:

• Bughouse (late 1800s), means either an insane asylum or the state of being insane.

• To get the bug, or, be bitten by the bug, is to become excessively enthusiastic about something.

• To get (or have) a bug is to catch some ailment.

• A bug in one’s ear is a friendly warning.

• And let’s not forget The Bug, the Volkswagen Beetle.

Note: A hobgoblin is a mischievous elf or goblin, a source of fear.