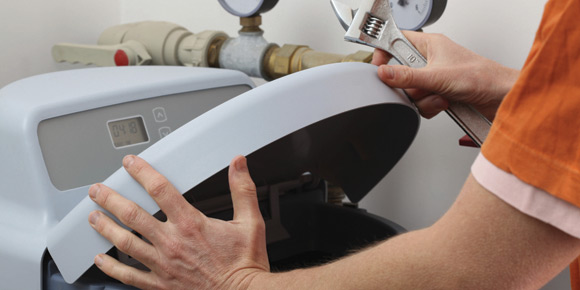 Do you need to install a water softener?

When my wife and I bought land outside the city many years ago, we were fortunate that a well with potable water already existed close to our building site. Wells, after all, are expensive to drill and the process requires heavy machinery that leaves a mess.

As city folks, we didn’t know our well water was hard and contained iron and iron bacteria, both of which stain clothes and plumbing fixtures deep orange. That was back in the day when tie-dyed T-shirts were hip, so our friends thought we were colouring our clothes with a groovy new dye.

We were advised by a neighbour to install a water softener. Our decision required in-depth thought because water softeners were environmentally uncool, contaminating the planet by discharging saltwater into the soil. Luckily, the arrival of our beautiful child made the choice for us — we didn’t want to send her to school dressed in clothes that looked like they’d been sewn together with tie-dyed T-shirts.

Which leads to a discussion of water softeners and whether you need one? Softeners are not just used in rural areas, as some city dwellers also install them in their homes.

Hardness is determined by the amount of calcium and magnesium in water. In Manitoba, most well water is hard because the province sits on a limestone base consisting of calcium and magnesium carbonates, both of which enter water as it percolates through the rock. Iron is also present in well water, as is iron bacteria when the iron concentration is higher than 0.1 mg (milligrams) per litre. Manganese, which may also be present, will stain clothing and plumbing fixtures dark brown at a concentration of 0.05 mg per litre or greater.

Hard water — 60 to 150 mg per litre of dissolved calcium and magnesium — has no adverse health side effects and can be preferable to drink than softened water which tastes slightly salty. It is not recommended for people on sodium-restricted diets.

Problems associated with hard water include discoloured clothing, use of more soap for cleaning, formation of scum and curds, toughening of vegetables during cooking and formation of scales inside boilers, hot water tanks, metal pipes and on cooking utensils. Moreover, if you’ve washed your hair in hard water, you know how dull and lifeless it seems.

Washing it in soft water is similar to using rain water, imparting a glorious sheen that emanates energy and beauty.

Before you decide to purchase a softener, take a sample of your water to a testing facility listed in the yellow pages or purchase a DIY kit from a big-box store for about $10.  Soft water contains less than 60 mg per litre of dissolved minerals.

The size of water softener depends on factors, such as the hardness of the water, the number of people in the family and the peak demand for soft water when in-laws or friends visit for a few days.

Generally speaking, a 35,000 grain capacity softener set at 10-pounds of salt that regenerates three times a week is sufficient for a family of four. If there is a lot of iron in the water (more than 0.3 mg per litre), then a higher salt dosage and more frequent regeneration may be required. Beware of cheap gizmos that claim to remove iron from water, as they are a waste of money.

In my experience, it is best to purchase a softener from a company that specializes in water treatment. You will benefit from their knowledge concerning the size of softener you need and their familiarity with the products they sell. If repairs are required, they will have the parts on hand and include instructions on how to install them.

You may pay a little less for a softener at a big-box store, but you will regret your decision if something goes awry. Most of these merchandisers don’t know the basics of how a softener works.

Finally, the brine tank is rinsed and refilled and the system is ready for the next regeneration. A cycle takes about two hours to complete.

I’m a big fan of simplicity, so I’ve always owned a water softener with an automatic regenerating system regulated by an electric timer. The timer is set to begin regeneration at 2 a.m. on the days selected for recycling. If the time is not convenient for your daily schedule, it can be changed by rotating a disk on the face of the head.

Similarly, the recycling days can be adjusted by pushing in or pulling out pins on a five- or seven-day wheel located next to the timer disk. The system can be manually regenerated by using a flat-head screwdriver to push in a red button on the head’s face and turning it counter clockwise until the softener starts. (Never turn the button clockwise.)

For extra money, you can purchase a computer-controlled unit that monitors the amount of water that has passed through the mineral tank to have depleted the beads of sodium. At this point, the computer triggers regeneration. As I’m not comfortable with computers and have no inkling of how to fix them, I don’t recommend these modern controls. However, if you are a geek (I mean geek in a positive way), then feel free to buy one.

I’ve only covered about half of the information about water softeners I wanted to present in this column but I’m out of space. Next time, I’ll include tips about how a DIYer can install a softener, as well as preventive maintenance tips.

Until then, keep on truckin’.