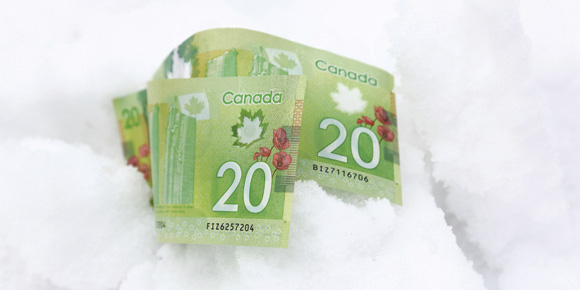 Another day another dollar

If you’ve married money, you’re laughing all the way to the bank. The same holds true if you’re made of money, are in the money, or are raking in the shekels.

Maybe that small fortune came because you hit pay dirt, or struck it rich. Maybe you inherited old money. Just don’t pour money down the drain or shoot your wad since it isn’t fun to fall off the gravy train.

Pay dirt was a synonym for “profit/success” by 1873. This sense evolved from pay-dirt as rich mineral ore in 1856. Gravy train (profitable situation) is 1920s U.S. slang. To ride the gravy train is to find easy financial success.

Several much-used sayings are now practically adages: “You pays your money and you takes your chances,” “Another day, another dollar,” “Put your money where your mouth is,” “Money to burn,” “The penny drops,” “Stop on a dime,” and, “Money talks.”

The penny drops is British, from 1951. It denotes “sudden realization” and originates in the idea of a coin dropped into a slot machine.

Some catchphrases describe feelings — “like a million bucks,” “right as ninepence,” “not give a tuppence,” “on the cheap.”

An adobe dollar is a Mexican peso. Not worth a plugged nickel (valueless) is 1940s slang originating because a “plugged” or “counterfeit” coin had an insertion of inferior metal.

We often describe people by using a money term. We might say, “He’s worth a buck or two,” “He’s made of money,” “She’s a gold-digger,” or, “They’re rolling in money.” Similar terms are “penny-pincher,” “moneybags,” and, “nickel-nurser.”

The lack of money has inspired yet more clichés: “not a sou,” “not have two halfpennies to rub together,” “not have a red cent,” “a day late and a dollar short,” and, “nuppence.”

Ante up can be dated to the mid-1800s. It arose in the gambling world where it indicated the initial payment into a poker pot. Today, it also means payment of money expected, for example, taxes.

In the first column about money, DaWood Ahmad of Humanity First was quoted as saying the way Canadians refer to money poses a problem for newcomers. Everything concerning money, however, must surely be a mystery to those who cannot easily speak English.