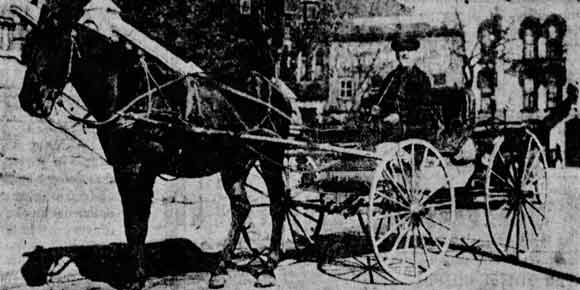 Ginger Snook — his early childhood in England was difficult

Albert Robert “Ginger” Snook was born in Forban, Wiltshire, England, on June 2, 1825, under less than advantageous circumstances. According to Snook’s November 18, 1926, Winnipeg Tribune obituary, his father, who had been a building contractor, died one month before he was born.

In the wake of their father’s death, the family of seven was left in financial dire straits, so at age three Snook was sent to a workhouse school, the only school in the district, where the children of the poor received a basic education. It is estimated that nearly half of the English families of this era were living in poverty.

At the age of seven, an aunt living in Tilburg took charge of Snook. While living with his aunt, he continued his education at a workhouse school and also at a Church of England Sunday School.

The Free Press obituary on November 19 claimed that, although Snook only received a rudimentary education in a workhouse school, “His ability in expressing himself was most forcible and was permeated with rough unconscious humor that always appealed to the auditor (listener) ...”

Winnipeggers were quite familiar with Snook’s early childhood since he recounted his life story to friends on numerous occasions and before his death wrote a pamphlet published in Winnipeg about his years growing up in England.

At age 12, he was returned to his mother then living in Melksham, Wiltshire, who was keeping a boarding house. Shortly afterward, he began work in a cloth factory, ending his period of formal education a year before he became a teenager. Children were often employed in England’s multitude of cloth factories and worked under Dickensian conditions for extremely low wages.

“My first week’s wage was six-pence (half a shilling),” wrote Snook in his pamphlet autobiography. “I did well at that work for in three months my salary was raised to two shillings (50-cents) a week. My next promotion brought me three shillings and six-pence a week.”

When the Crimean War broke out in 1853, the factory in which Snook worked was closed down. He and 300 out-of-work fellow employees joined the British Army. The British were then allied with the French and the Ottoman Empire against Russia.

Snook joined the15th Foot Regiment and underwent training at Pembroke, Wales. His regiment was then sent to Malta where Snook and 400 of his companions were prostrated by what was called “Maltese Fever,” which is actually the disease Brucellosis that has been variously known as Bang’s disease, Crimean fever, Gibraltar fever, Malta fever, Maltese fever, Mediterranean fever, Rock fever or undulant fever. Brucellosis is a highly contagious zoonosis caused by the ingestion of unpasteurized milk or undercooked meat from infected animals, or close contact with their secretions. Since Malta is a small island in the Mediterranean, thousands of troops and the livestock needed by the army couldn’t avoid intermingling on the island where the disease remained endemic until the early 20th century.

Snook’s illness prevented him from fighting in Crimea, so he was sent back to England to recuperate. He wrote that it took him two years to regain his normal strength.

Following a 10-year stint in the army, Snook retired, but he remained an army reservist. In London, he obtained a position on the Metropolitan Police Force.

“In this capacity he had a number of thrilling experiences,” according to his obituary, “outstanding among which was his connection with the conviction of William Wainwright for the murder of Harriet Lane.”

Actually, the murderer was brushmaker Henry, not William, Wainwright, who killed his mistress, Harriet Lane, in September 11, 1874, and buried her body in the ground under the floorboards of a warehouse he owned. Wainwright shot his mistress when she incessantly demanded money for her two children’s upkeep at a time when Wainwright was on the verge of bankruptcy

After a year of not knowing Lane’s fate, the crime came to light only when his lack of money forced the killer to sell the warehouse. Fearing the discovery of the body, which was emitting a foul odour throughout the warehouse and out onto the street, he returned to the scene of the crime to recover her body.

Alerted by an alarmed Wainwright associate, a constable, who’s name is given as Henry Turner, found Wainwright with the suspicious bundles and arrested the killer on the spot. The bundles and their contents were not opened until taken to the Southwark police station.

At the time, the murder received more publicity than the killings of Jack the Ripper in 1888. Curiously, Wainwright’s house and warehouse were on Whitechapel Road, the London Street where Jack the Ripper also committed his infamous slayings.

What exactly was Snook’s actual role in the arrest of Wainwright was not revealed. He definitely wasn’t the constable who found the gruesome parcel contents, but he may have been involved in the subsequent investigation at the warehouse, but only a Constable Rogers is mentioned to this effect and Scotland Yard detectives were also called to the site to provide their assistance.

In another newspaper article, two constables are mentioned, No. 48 and 290 M (letter designation for Southwark police division), who were directed by Arthur Stokes to Wainwright. Stokes’ court testimony does mention the presence of two constables, but only Henry Turner entered the house where the parcels were to be delivered, while unnamed Constable 290 investigated the cab, where he found Wainwright’s new mistress, Alice Day, seated — she was picked up by the killer along the route to his brother’s house — next to a parcel.

Further reference in the Tribune to Snook’s police career mentions his role in the arrest of Charles Peace, the “King of Burglars,” which had earlier been reported by Robinson.

In 1879, Snook sailed to Canada and became a resident of London, Ontario, and was employed as a railway section hand. He then moved to Chicago where he also worked on the railway.

His next employment was with a U.S. government survey party working along the Mississippi River.

Snook arrived in Winnipeg on January 2, 1882, during the peak of the 1881-82 speculative land boom in the city, Manitoba and across Western Canada. His first work was as a track layer for the Canadian Pacific Railway (CPR).

Snook later claimed to have had the honour of connecting the last rail of the transcontinental line in British Columbia. The last spike for the line linking east to west was driven at Craigellachie, B.C., on November 7, 1885. As proof of his participation, Snook said he had in his possession the very wrench he used for the last bolt in the angle irons to connect the steel.

The last spike in the line was driven home (it took two spikes and two attempts) by Donald Smith, a director of the CPR. In the famous picture taken by Winnipeg photographer Alexander Ross of the event, there is no official mention of Snook, but there is a throng of unidentified men in the gathering which may have included Snook.

As in the case of the Lane murder in England, one has to take the word of Snook as proof of his accomplishments. The fact that he was never contradicted adds credence to the validity to his claims.

Snook next took charge of a railway gang for Donald Mann and William McKenzie, who were in the process of building the Canadian Northern Railway.

According to Snook’s Tribune obituary, the two businessmen were having difficulty controlling their crews because of problems with food and pay. “Often the men assumed threatening attitudes when the paymaster failed to arrive on time.”