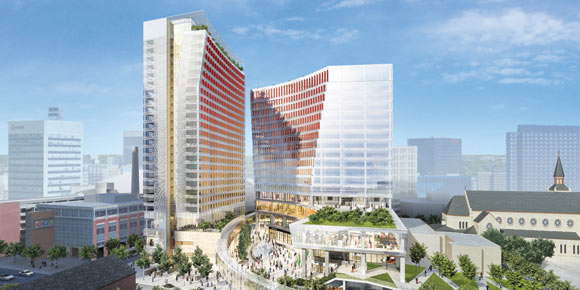 It’s big, really big, both in terms of size and money that will be spent to make it a reality.

At $400 million, it’s the biggest private-sector project in the city’s history.

With four towers, a central plaza and parkway, it’s the biggest private-sector project in terms of commercial scale in the city’s downtown.

It’s also a big project from people who have a big vision for Winnipeg. The scale of the project is so big that it’s no wonder that those behind its creation were gushing with enthusiasm when the plans for the square were recently announced. And it should be remembered that no big project is announced anywhere in the world without the extravagant use of superlatives entering the description — that’s the nature of the beast, although in this case, there is a great deal of merit to the use of glowing superlatives when the project is placed in the context of Winnipeg’s built history.

The reality is that True North Square is so big that it deserves to be called one of the biggest game changers in the history of Winnipeg. As claimed in the press release from True North Sports & Entertainment Limited, along with its partner James Richardson & Sons, Limited, when announcing the first phase of the project, True North Square will redefine the heart of the city and “change the landscape of Winnipeg’s downtown area.” Essentially, it’s a big-time people gathering place in the downtown.

The heart of the downtown has been undergoing a remarkable transformation in recent years with the establishment of The Forks, the Canadian Museum for Human Rights, the MTS Centre and the new Manitoba Hydro headquarters, the downtown Red River College Campus among others, and True North Square adds another level to the future prospects for the downtown.

Recently, True North Square was officially unveiled, although it’s coming was hardly a secret. Excavation for True North Square is now underway which is kitty-corner to the MTS Centre between Graham Avenue and St. Mary Avenue. But the official ceremony at the MTS Centre was also meant to reveal the future plans for the square and that three high-profile tenants had already signed onto the project.

“Our vision is to create a transformative mixed-use project that is integral to the success of downtown Winnipeg,” said Jim Ludlow, president of True North Real Estate Development.

Seventeen-storey, 365,000-square-foot Tower 1, 242 Hargrave St., was unveiled at the press conference. Office tenants for Tower 1 include Scotiabank and the prominent Winnipeg law firm, Thompson Dorfman Sweatman LLP (TDS). The first of four towers to be built and projected to open in the summer of 2018, Tower 1 will include advance features such as height ceilings, floor-to-ceiling glass, destination dispatch elevators, high-performance mechanical systems, and flexible office configurations.

The three other towers “will offer engaging residences, luxury hotel rooms and services, restaurants and retail, including Manitoba Liquor & Lotteries new flagship Liquor Mart, for office workers and the neighbourhood in general,” according to the True North Square announcement.

“Our goal is to design spaces that provide for the highest standards of workplace flexibility, tenant health, comfort and substantiality, and to create complementary public spaces and urban experiences that match the best in North America,” said Ludlow.

Hartley Richardson, president and CEO of James Richardson & Sons, when announcing his company’s partnership with True North Sports & Entertainment, owners of the MTS Centre and the NHL Winnipeg Jets, said: “The development of the Richardson Building had a very positive impact on Winnipeg and we are confident that True North Square will have a similar legacy in enhancing a city that we are all proud to call home.”

While the 34-storey Richardson Building, built in 1967 at the corner of Portage and Manitoba, obviously had an impact on Winnipeg’ downtown core, True North Square brings with its development the potential to add more.

“A private downtown development like this happens once in a lifetime,” added Keith LaBossiere of TDS. “When we understood the transformative move that True North was making, we knew we needed to partner with them.”

TDS signed a lease for the top three floors of the 17-storey Tower 1 as an anchor tenant.

“True North Sports & Entertainment is creating a cutting-edge development, and we are thrilled to introduce The Sutton Place brand to Winnipeg,” said Tom Gaglardi, chairman and CEO of the The Sutton Place Hotels, which has hotels in Edmonton, Revelstoke Mountain Resort and Vancouver.

The purpose-built hotel to be part of True North Square will be connected to the MTS Centre by a skyway. “Along with two exquisite towers — a 27-storey, 275 hotel room tower and a 17-storey, 130 residential-unit tower — this property will offer guests an indoor swimming pool, whirlpool, fitness centre, spa, conference facilities, a landscaped roof-top garden and elegant porte-cochere to both the hotel and residential towers,” according to the press release.

What should also be pointed out is that the hotel will directly benefit the nearby newly-remodelled and expanded RBC Convention Centre. To attract conventioneers to the city and away from other major North American destinations on the convention circuit, executives from the convention centre have continually claimed that Winnipeg needs more luxury hotel rooms and The Sutton Place Hotel will help to fill this void. In the world of convention-goers, cheaper is not necessarily better.

“Our philosophy is ‘A Tradition of Luxury,’ and that’s exactly what we’ll be bringing to Winnipeg,” commented Gaglardi, which should bring smiles to the faces of the operators of the convention centre.

If not for the big vision that brought about the MTS Centre, the Jets would never have been brought back to Winnipeg. In turn, the Jets have contributed to the revitalization of the downtown as a people place. People go to a pro hockey game or attend a concert, eat a dinner before or after, or have a drink in the restaurants and bars that have sprung up in the area since the arena came into existence — one feeds upon the other and True North has itself been involved in some of the new developments outside the arena.

The MTS Centre was not the end-all to end-all, but it was a beginning toward rejuvenation of the downtown that required the big vision of Mark Chipman and David Thomson to make it a reality.