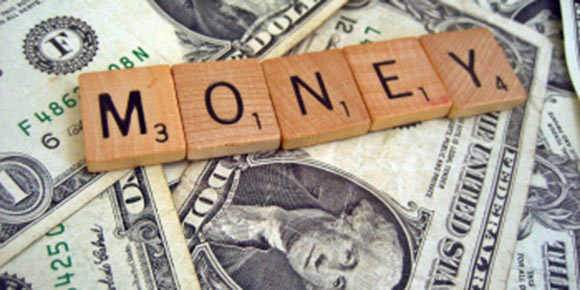 Phrases and idioms referring to money

Not only does English contain scores of words designating money, many phrases and idioms refer to currency, or the lack of it.  Several of these don’t even mention money although the reference is clear.

To grease someone’s palm is an example. This saying means, “to give money in expectation of a return favour.” The expression is a translation of a medieval French phrase: Oindre la pawne à quelqu’un. By the early 1500s, this phrase had surfaced in English, the word “palm” replaced by “hand.” Greasing someone’s palm has been in everyday English since the early 18th century.

To make a killing has nothing to do with death. In fact, it originated in racing slang where it meant, “to score a big win.” Today, it’s about making a lot of money; reaping a big profit.

Possession of money lends itself to using that money. High roller points this out. Beginning in the 19th century and still in common speech, a high roller is “one who spends lavishly.”

To shake the pagoda tree is Anglo-Indian from about 1850. It means, “to become rich quickly.” A pagoda was a gold coin used in Southern India and called that because it featured a pagoda on one side.

To make ends meet (to balance income with outgo) was first heard about 1748. The “ends” originally referred to “year.” That is, money earned from the beginning of a year until its end, should cover expenses.

Up against it, on one’s uppers, tapped-out, in the hole, and, in the red, all mean, “lack of money.” To be up against it arose in the U.S. in the late 1800s. In the hole, also American, is a gambling term meaning, “in debt.” It began about the same time.

In the red, again referring to debt, is not as old, having surfaced in the 1920s.

Originating in the late 19th century, on one’s uppers means, “to be in great poverty.” Uppers suggests the upper parts of shoes. So, to be on your uppers means to be so poor you must walk on the uppers of your shoes because the soles have worn out.

Some sayings evoke hope that things will get better. When my ship comes in equates with, “When I finally make my fortune.” This English expression is from the 17th century. To make one’s jack means the same thing, but wasn’t heard until 100 years later.

Savings also feature in such slang. For example, a slush fund (late 19th century) is an “emergency fund.”

Stash began to mean, “a hoard of money,” in the 1920s. It already meant, “hiding place.” Thus, the implication of stash, as it referred to money, became, “money hidden away.”

If you are not yet on easy street and you end up so out of pocket that you must panhandle, do take heart. Some day, you could be the last of the big spenders.