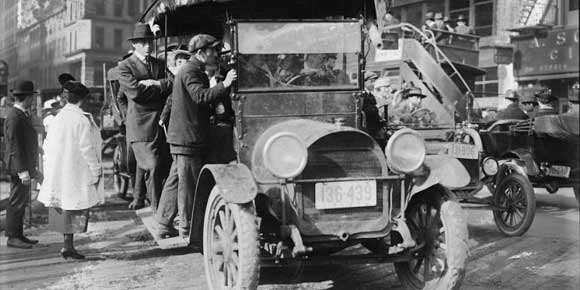 My sister-in-law is a big fan of Uber. While recently visiting her and my brother in Palm Desert, she told me so in no uncertain terms.

“They come on time and their fares are exceptionally reasonable. They’re a heck of a lot cheaper than taxis,” she added.

There the rub. Uber has been making inroads in numerous cities across Canada and the U.S. and it has cab companies running scared, fearing that the competition with low-fare car drivers will drive them out of business.

What is equally surprising is that it’s not a new battle between a company with a ridership monopoly and freelancers wanting to earn a few bucks by giving consumers another option. In fact, the example of jitneys and streetcars immediately come to mind, especially the battle waged between the Winnipeg Electric Railway Company (WERC), which operated streetcars on the city’s streets and freelance drivers who drove cars (jitneys) and picked up passengers along the street — the Uber of the day.

The WERC felt its bottom line was constantly under attack by the jitney drivers and demanded that city council institute a ban on such conveyances. To address its own concerns over the competition, the WERC began bus routes in parts of the city in response to public demand for improved service, as streetcars were extremely cold in the winter, overly hot in the summer and prone to continual derailments or other breakdowns that caused constant time delays, making it difficult for passengers to make appointments or arrive on time for work. What the company failed to realize at the time was that it was proceeding on an irrevocable road toward extinction for the very service it was attempting to protect; that is, streetcars.

The word jitney arose in the French Quarter of New Orleans, where a five-cent piece was called a jeton, or token, which was quickly altered to jitney with car drivers charging a five-cent fee moving people about the city. The concept of anyone possessing a car capable of carrying several passengers for a small fee spread across the continent, reaching Winnipeg in the spring of 1914. Those taking up the business in Winnipeg were primarily those who owned a car, but had fallen on hard times due to a recession.

People in West Kildonan were so captivated by the jitney concept that they asked their council to rescind its jitney licence bylaw and “help the jitney business to give West Kildonan a good service, even to the extent of financing a municipal jitney service, if advisable” (Winnipeg Tribune, February 2, 1917).

The residents paid five-cents for a jitney to take them from downtown Winnipeg to West Kildonan. On the other hand, they received eight streetcar tickets for a quarter, but it took two tickets to get home, one for use in Winnipeg and the other north of the city limits (West Kildonan was not then part of the city).

In 1918, the WERC claimed it was losing $400,000 a year because of increased operating costs and the competition from jitneys, according to company lawyer Edward Anderson. He claimed that the success of the city and the success of the company went hand-in-hand and that when one suffered the other also suffered (Tribune, February 9, 1916).

“Many complaints have been voiced regarding the service ...,” Anderson asserted, though how he came to this conclusion is suspect. “In view of the present situation, if the jitneys are allowed to continue on the streets ... We shall, maybe, be forced to either let the service run down to such a point that it will be absolutely inadequate or ask for revision of our contract (with the city), so that we shall be forced to ask nickel fares and discontinue the transfers. If jitneys are eliminated then we are not asking for any changes in fares.”

T.J. Murray, the lawyer for the Jitney Owners’ and Jitney Drivers’ Association told council it wanted the question of jitneys continuing in Winnipeg be put before the people in a referendum, the implicated being that the jitney operators would come up on top of such a vote.

The association contended that other cities in North America had two or more companies providing transportation services, and that jitneys assist the streetcar company in handling the city’s transportation needs, especially during rush hour.

“The company is not doing that, as cars are lined up around Portage Ave. and Main St., when the rush is on,” claimed the association’s executive. “It takes the company from 30 to 40 minutes to get passengers from Main St. We can get them there in 10 minutes” (Tribune, January 19, 1918).

By this time, the pressure exerted by the WERC on city councillors was taking its toll. A one-paragraph article in the Manitoba Free Press, announced on May 2, 1918, Motor Buses in Operation. For the first time in the city’s history, a gas-powered bus, carrying 16 passengers and driven by J. Allen, had left the terminus at Westminster and Sherbrook on May 1. Three other buses then followed at scheduled intervals. The bus route was along Westminster Avenue, Lipton Street and Portage Avenue.

The article also reported that the Winnipeg Electric Railway Company (WERC) was being petitioned by area residents to add Elgin Avenue as a bus route. “The decision rests with the city council, as they can obtain the same by ordering the company to place them on that route.”

The initial change in the city’s transit system arose when the city agreed with the WERC to remove jitneys from the city’s streets. The May 2 edition of the Free Press also carried an article on the same page as the announcement of the first bus service that proclaimed an end to jitneys in the city. According to the article found below the story about the buses, the lawyer for the Jitney Owners’ and Drivers’ Association was instructed not to oppose the new city bylaw putting the privately-operated vehicles out of business.

The price that the WERC paid to the city for passage of the bylaw was the expansion and improvement of its streetcar rolling stock, as well as the implementation of a motor bus service. The agreement called for the transit company to spend $900,000 over a three-year period, but the WERC actually doubled that amount to $1.8 million. Another $500,000 was spent by the company for new sub-stations and upgrades.

As with the jitneys of the past, Uber has expanded to other cities in Canada. And as with the jitneys, Canadian cities are placing their own form of restrictions on how Uber operates. Starting April 4, non-taxi drivers will be able to carry passengers in Calgary if they have a valid taxi driver's licence, submit to an annual background check by police, and have commercial insurance. Similar rules were recently put in place in Edmonton. Uber will also pay Edmonton $50,000 a year, plus six cents for every trip taken by an Uber passenger, and contribute $20,000 each year toward a fund for passengers with physical disabilities.

While some may want Uber to come to Winnipeg, don’t except the service anytime soon, as there is a lack of support at the provincial and city government level at this time.