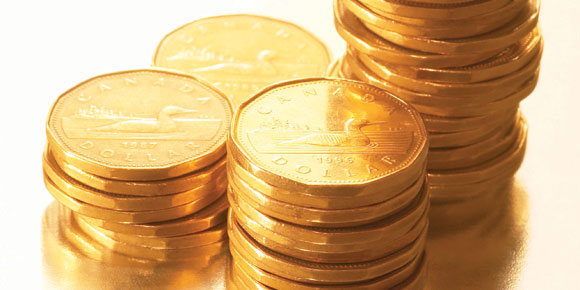 When you’re speaking about money

On December 14, 2015, the Globe and Mail quoted DaWood Ahmad of Humanity First re preparing refugees for life in Canada. Ahmad mentioned that the way we refer to money presents a huge problem for newcomers. He said: “One dollar is a loonie. Two dollars is a toonie. Twenty-five cents is a quarter.”

Ahmad is absolutely correct. We almost never use proper terminology when speaking of money. You disagree? When was the last time you said, “ten cents” rather than “dime?”

Loonie, toonie, quarter and dime are but the tip of the iceberg. We also say buck, clam, sawbuck, nickel, simoleon, two-bits, tenner, smackeroo, grand, and K, to name but a few money nicknames.

Clam was originally U.S. slang first used in the late 1800s when it meant, “one dollar.” Cassell links clam to wampum. Wampum (money) is from the Algonquian wampumpeag (beads made from quahog shells). Cassell suggests that since clams also have shells, the two are companion terms. But, as with so much slang, no one knows how or why the usage actually began.

Buck is easier to trace. It arises from “buckskin,” the deerhide used for barter in early North America. Buck started life as a term for dollar in the late 19th century. Strangely, buck has emigrated. In the 1970s, South Africans adopted buck as a nickname for “rand,” the basic currency of that country.

Dime comes from the Old French, disme (10th), but is ultimately from the Latin decima (10th part; tithe). It was first used in relation to money in 1785.

We have invented slang terms for money found in quantity. So, we have such expressions as lettuce, moola, bread, folding money, loose change, nest egg, hay, pay-dirt, megabucks, swag, and small fortune.

The opposite also holds true. Money shortages have taken on nicknames — in hock, chickenfeed, red ink, shoestring, skint, stone-broke, go belly up, in the red, not a bean, small change, and small potatoes.

Nest egg has an unusual source. We use nest egg to refer to money put away for future use, but it comes from the practice of placing a ceramic egg in a hen’s nest to encourage her to lay more. This term is very old, heard as early as 1611.

Swag, originating in Australia, is 20th-century slang for “money.”

Chicken feed, a noun phrase by 1830 and U.S. in origin, has always meant, “an insignificant amount of money.”

Skint, a British term from about 1925, means, “broke.” Skint has numerous synonyms. A few of these are: stone broke, up against it, tapped out, hard up, lose one’s britches, not a sou, not have a pot to pee in, not have two halfpennies to rub together, on one’s beam ends, and shoot one’s wad.

Whether you are loaded or hard-pushed, if you happen to be a recent arrival in Canada, good luck with the money talk. You’ll need it.