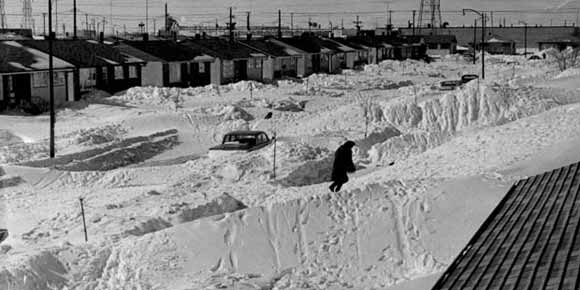 So, the weather this week is delightful. In fact, for the most part, the whole winter season so far has been quite bearable. But beware of becoming too complacent. Remember that the winter is far from over, despite what the various ground hogs in various locations across North America may have predicted on February 2. Mother Nature can revert to her wild side at any time during the coming weeks and days.

The month of February is nearly over, which brings us to March — the month of doom in weather folklore, which can come in like a lion and go out like a lamb, and vice versa. The “lion” and “lamb” saying of yore is not really based on fact, but on remembrance of past wild winter events.

In Manitoba, the Friday, March 4, 1966, blizzard added to the old adage about March coming in like a lion. This severe weather event is indelibly imprinted in the memories of many Manitobans, who remember that the blizzard was so intense that the province ground to a standstill.

Whenever a major snowfall hits these days, comments arise from those who went through that blizzard that include: “You think this is bad, I recall in ’66 the snow drifts were so high they blocked doors, covered windows and went up to the eaves of houses ...”

The latter is not so far fetched. I remember as a young lad easily climbing up on roofs of some buildings and jumping off into the massive drifts.

One police official in 1966 said rural Manitoba communities were “locked in tight.” The RCMP warned motorists to remain off rural highways, noting that visibility was “zero” in many areas.

In Carman and Altona, deep drifts blocked all main streets. Schools across southern Manitoba were closed, and many events were cancelled. In Winnipeg, schools were ordered closed by Manitoba Education Minister George Johnson until Tuesday.

Wild Blizzard Rakes Province was the headline in the March 4 edition of the Free Press. The severity of the storm  — 120 km/h winds and 35 centimetres of snow — caused Mayor Steve Juba to warn Winnipeggers “to stay at home and keep their cars off the streets.”

The mayor said people venturing outdoors were putting their lives at peril. “If you are out,” he added, “step into any home for shelter. I’m sure no one in Winnipeg would turn people out into the storm.”

About 135 transit buses were reported to be stranded on city streets, resulting from snowdrifts in some places being nearly three metres high. Transit drivers kept “bus engines running to ensure the warmth of the dozens of passengers still aboard.”

Since the trolley buses relied upon overhead power lines (electricity didn’t fail during the storm), they were better suited to keep passengers warm, but diesel buses ran out of fuel.

“We aren’t able to keep them fuelled,” said Metro transit spokesman Don Morrison. “We had an equipment crew on skidoo out in Transcona but they couldn’t even get through on that.” As a result, bus drivers and passengers were forced to take shelter in private homes.

“The end of the world could have been this day,” reported Raymond Sinclair in the March 5 Free Press. “But it wasn’t. Buses surrendered, cars pro-tested, telephone exchanges were taxed to the limit, but it takes more than history’s worst Winnipeg blizzard to make the people despair.”

It was later reported that 44 women gave birth in their homes as they were shut off from assistance by police and emergency personnel.

Winnipeg police constables Fred Martin and Robert Mills were on-hand for one delivery. They were called to a Lansdowne Avenue home, and with the aid of a front-end loader breaking a path, their cruiser managed to reach the residence within two hours. Following instructions given by a doctor over the phone, the two men delivered a baby boy. Both mother and baby were reported as doing well.

Another five expectant women were taken to hospitals with the help of snowplows. One of these trips was reported to have taken five hours.

A “badly hemorrhaging” woman was saved by an unidentified driver of a Land Rover who transported her to a hospital after the blizzard foiled two attempts by the Winnipeg Fire Department. A rescue truck bogged down amid snarled traffic and a second vehicle became stuck at Spruce Street and Sargent Avenue.

At the Eaton’s Store downtown, 700 staff were trapped with 400 customers “who didn’t want to move — or couldn’t.”  Operation Snowbound, initiated by the Greater Winnipeg Safety Council, worked out of Eaton’s catalogue department.

The city then issued at 1 p.m. an urgent appeal for “any type of vehicle capable of moving under present blizzard conditions.”

In Transcona, two people who suddenly became ill were transported to the Winnipeg General Hospital “by auto toboggans borrowed from private citizens.” Snowmobiles were the only viable means of transportation on most city streets until paths were cleared by snowplows.

By Saturday, some buses were again running, but full service wasn’t restored until days later.

A group of 50 young amateur (ham) radio operators set up a citizens’ band network to send food, medicines and other items throughout Winnipeg via skidoos, tow-trucks and private cars.  An “emergency control” was set up in a corner of the second-floor lobby at city hall. Several skidoos and other vehicles equipped with radios were the mobile units, while radio operators in private homes served as the base units, relaying messages as needed.

“Our biggest problem is getting workers back home from their jobs,” said Manitoba Public Utilities Minister Maitland Steinkopf. Thousands were stranded in office buildings, stores and other places of work throughout the city.

“Storm-stunned Southern Manitoba began counting costs in earnest Monday,” reported the March 7 Free Press. “It could be thankful the death count wasn’t as high as the 16 lives claimed in the weekend storm in the Dakotas and Minnesota. Only two deaths were definitely blamed on the storm here. A third is being investigated.”

The city’s snow clean-up bill was estimated at $1 million (about $6 million in today’s dollars), and exceeded the entire 1966 snow budget by $300,000. By way of comparison, the recent mid-February blizzard — 3.5 centimetres of snow driven by 60 km/h winds — cost the city about $500,000 to clean up. Typically, the annual snow-clearing budget is about $30 million.

As could be expected, a spring flood occurred in 1966 in the Red River Valley, which was aggravated by the March 4 blizzard.

This year, the hope is that there is no similar repeat and March goes out like a lamb to keep predicted flooding to a minimum.