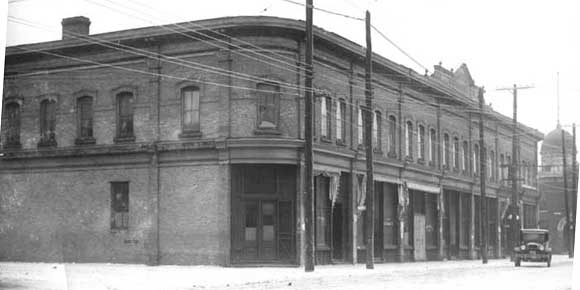 A public outcry arose after the wood alcohol poisoning deaths of 11 men and the blinding of another after a drinking binge in Room 19 of the Coronation Block at the corner of Alexander and King.

“When the series of wood alcohol poisonings took place around Christmas time the community was shocked and it was felt that something had to be done,” explained the April 14, 1928, Winnipeg Tribune.

In a January 11, 1928, letter to the Winnipeg Free Press, J.H. (John Henry) Riddell, the president of Wesley College (today’s University of Winnipeg),  called the 11 deaths of “fellow citizens” a “startling tragedy.” Not surprisingly, the Methodist minister’s remarks are quite similar in tone to comments about the plight of today’s homeless and less privileged.

“The sad thing about the whole affair is not that eleven men passed out into the spirit world in such destitute surroundings and by such deplorable measures but the thing that brings us pain is that these men came to a point where they found comfort in a place so revolting ... and had to find their satisfaction in the use of a beverage so dangerous and degraded as ‘canned heat.’”

Riddell said that the men were not always so underprivileged and at one time were “bright-eyed rollicking boys,” who received a public education and probably attended Sunday school, and as such they would be going “into life with some hopes and some ambitions.”

He was not quite completely sympathetic with the plight of the dead men, at one time referring to them as “useless,” but did understand they were fellow human beings who deserved better.

Riddell then gave some possible reasons for their fall and subsequently being forgotten by society, “losing their interest in life and finding year by year their satisfaction in more superficial and material ways.”

He said no one cared about their fate, including governments which occasionally paid them a few dollars for some make-work labour or provided welfare.

Riddell called for society to “awaken ... Surely boys and men are worth more than dollars and cents and pleasures and satisfactions and what would it profit us if we gain the whole world and lose our manhood, and have others come to a similar end to which these came in a block in our city.”

Reporting to the city’s health committee, Hague said the conditions in the Coronation Block were not as dire as commonly stated. He said trouble arose chiefly from the fact that many men who rented rooms lay in their beds throughout the day — unemployment had made them idle.

In some cases, the rooms were rented without bedding and the men slept in their clothes, which created unsanitary conditions.

Hague suggested to the city’s health committee that lodging houses in the city be limited to a minimum of eight rooms for rent, although the city’s draft bylaw favoured regulation of rooming houses with five or more lodgers.

Furthermore, the proposed bylaw called for metal frame beds as opposed to wooden frames. The reason cited was that wooden beds become cracked over time and “the cracks get filled with vermin.” Apparently, controlling vermin, such as fleas and bedbugs, in lodging/boarding houses was an ongoing problem in the city.

The debate over the bylaw continued for some time before it was given third and final reading in October 1928. Once the bylaw was in place, all the city’s lodging houses had to be licensed and regular health department inspections were to be conducted.

Sometimes a great tragedy can contribute to reform in order to better the lot of the less fortunate. Still, in the case of the Coronation Block wood alcohol poisonings, the cost in lives to bring about reform was an extraordinarily high price to pay.

The lesson of the Coronation block was apparently not heeded, as a man was found in dead from wood alcohol poisoning in his bed at his Pacific Avenue home on January 30, 1928. Two weeks earlier, another man had died from the same cause.

The Free Press reported on February 6 that the first woman to become a victim of wood alcohol poisoning was found unconscious and rushed to hospital in critical condition.

On October 30, 1928, a man who had been working as a harvester, was found by Winnipeg police leaning on a fence opposite 609 Logan Ave. He was taken to Winnipeg General Hospital where he told police he had been drinking methyl hydrate with two others on a train bound for Montreal. He died in hospital.

Even today, deaths from wood alcohol poisoning are reported from around the world, which are usually the result of drinking legal brands of liquor unscrupulously adulterated with methyl hydrate so that the product can be sold cheaply to the unsuspecting, or from consuming illegally-produced home brew containing the deadly chemical.