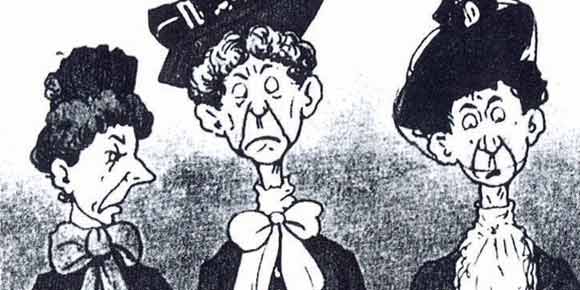 100th anniversary women get the vote

One hundred years ago, Manitoba became the first province in Canada to grant women the right to vote.“ January the twenty-seventh, nineteen hundred and sixteen, will stand out for all time in the political history of the Province of Manitoba,” announced a Manitoba Free Press editorial, “and of the Dominion of Canada. On that day, the Legislature of Manitoba extended the parliamentary franchise to women upon the same terms as men. To all who have worked, and are working, for the triumph of democratic principles; to all who believe in the inherent goodness and sweetness of human nature, it is a day of rejoicing and of exceeding gladness.”

Officially, women were actually given the right to vote and hold office in provincial elections when the bill was given Royal assent a day later on January 28, but it was the day earlier vote and passage of the amendment to the Manitoba Elections Act that marked the success of lobby efforts by Manitoban women after long years of disappointment.

The Manitoba government is marking the 100th anniversary of voting and political milestones for women with a series of special events and initiatives in January, announced Family Services Minister Kerri Irvin-Ross, who is the minister responsible for the status of women.

“The Manitoba government is proud to proclaim January as Women’s Equality Month.  Part of the ongoing journey to achieve equality for women is to recognize our past and celebrate our future,” said Minister Irvin-Ross.  “Marking Manitoba’s role as the first province in Canada to give some women the right to vote in provincial elections and hold provincial office is part of all Manitobans’ shared heritage.”

Still in 1916, just as with men, only some women became eligible to vote and hold office in provincial elections. They had to be British subjects by birth or naturalization, at least 21 years old and meet other requirements.

For the 100th anniversary, special events marking the milestone include:

• A new woman’s tour of the Legislative Building will be available for the rest of the year, celebrating notable female firsts in Manitoba.

• Special banners on display on the Legislative Building grounds throughout the year to mark the 100th anniversary;

• A display on the external dome of the Legislative Building bearing a special image commemorating electoral progress;

• An ice sculpture commemorating the 100th anniversary, to be placed on the grounds of the Manitoba Legislature as part of Festival du Voyageur.

• The original signed legislation will also be on display at the Legislative Building.

A centennial gala will be held on January 28 for the Nellie Awards, a partnership between the Nellie McClung Foundation and the Winnipeg Free Press, to honour Manitoba women who have made significant contributions to social justice and human rights.

The achievements of early Manitoba Suffragettes, who led the fight for the vote, E. Cora and Nellie McClung, has been further recognized through their induction into the WinnipegREALTORS®-established Citizens Hall of Fame, which honours Winnipeggers for their outstanding contributions to the community’s quality of life.

A January 28, 1916, Free Press front page article reported that the amendment to the Elections Act was passed, “Amid a scene of unparalleled enthusiasm.” Cheers arose from the floor and the gallery. Women attending the momentous event, broke out into O Canada. “No previous scene in the history of the house presents a parallel to that of yesterday,” declared the newspaper. For the first time in the history of the Manitoba Legislature, women were invited to the floor of the chamber during a regular sitting. The women were members of the Political Equity League that had fought long and hard to obtain the vote.

Acting-Premier T.H. Johnson, the public works minister in the Premier T.C. Norris Liberal government, delivered a speech on the “stupendous importance” of Manitoba being the first province in Canada “to enfranchise women,” predicting that other provinces and the federal government would follow Manitoba’s lead (In 1918, Ottawa gave the vote to a limited number of women).

To obtain the vote, Manitoba women had to fight the entrenched male view that the their place was in the home. Earlier on, women found that humour was their strongest weapon for embarrassing male legislators to change their opinion on universal suffrage.

On January 28, 1914, a satirical song was sung with lyrics cleverly changed from a London setting to Winnipeg. How They Won the Vote involved converting Horace Cole from being an anti-feminist to a “rabid” supporter of the suffragette cause. In the song, the conversion of the fictional character occurred after the women staged a strike, leaving their employment to live with their nearest male relatives “until such time as the state should recognize” their “rights.” When Horace arrived home, he found the maid had left and his wife was wrestling unsuccessfully with a steak meant for supper. “The worst was yet to come, however. Before he was able to appreciate the force of the first blow, his sister-in-law turned up, and announced her intention of staying.” His niece followed suit as did a first cousin of the same sex, an aunt, and finally a very distant relative of the female persuasion.

“All were firm in the intention of staying until man foreswore that pious fraud about woman’s place in the world. Under the circumstances, it was not surprising to find Horace ready to enlist among the ‘Votes for Women.’”

On January 28, 1914, women held the impressive drama and debate, which included the above-mentioned song and a mock parliament, at the Walker Theatre. Acting as the Manitoba premier at the mock parliament, Nellie McClung received a male delegation demanding the right to vote. “We wish to compliment this delegation on their splendid gentlemanly appearance,” McClung told the men. “If, without exercising the vote, such splendid specimens of manhood can be produced, such a system of affairs should not be interfered with ... Another trouble is that if men start to vote they will vote too much. Politics unsettles men, and unsettled men mean unsettled bills — broken furniture, broken vows, divorce.”

It was a dig at then Premier Rodmond Roblin, who had said, “... nice women don’t want the vote.” Refusing women the vote was a position he steadfastly held onto since first becoming premier 14 years earlier.

“I believe, we’ll beat you yet, Sir Rodmond,” McClung told the Conservative premier when appearing in 1914 with a delegation of women asking that they be allowed to vote in provincial elections.

As had been the theme of the old melody sung in 1914, thanks to the “milestone” that occurred on January 27, 1916, Manitoba women are no longer compelled to go on strike and live with their nearest male relatives “until such time as the state should recognize” their “rights.”