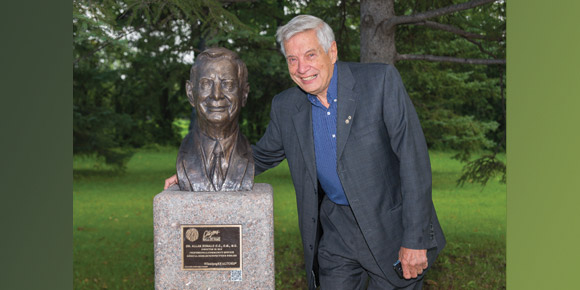 A repository of local history

One of the most active boosters of the WinnipegREALTORS® Citizens Hall of Fame is Dr. Naranjan S. Dhalla, the recipient of the 2000 Citizens Hall of Fame bronze medallion. Dr. Dhalla is a world-renowned heart disease researcher who specializes in investigating cardiovascular disease at the sub-cellular level. He heads up the Institute of Cardiovascular Sciences at the St. Boniface Hospital Research Centre.

As a leading professional in heart disease research at an international level, he was proud to nominate the 2015 Citizens Hall of Fame inductee Dr. Allan Ronald, another world-class medical science researcher, who has made Winnipeg one of the top global centres for infectious disease research. The federal government’s decision to build the National Microbiology Laboratory on Arlington near the Health Sciences Centre complex is testimony to Dr. Ronald’s groundbreaking work on HIV/AIDS in Africa and his unwavering commitment and dedication to making Winnipeg a hub for infectious disease training and research.

Another Citizens Hall of Fame inductee, 1990 bronze medallion recipient Dr. Thorlakson, if he were alive today,  would also be proud to see what has evolved at the HSC, as he played a monumental role in establishing Manitoba’s largest and most important hospital in the 1940s.

These are just three of the 42 Citizens Hall of Fame inductees. Dr. Dhalla has said the unique program, which displays likenesses of all the inductees at the Citizens Hall of Fame site in Assiniboine Park, is a permanent record of citizens who tell a story about and give you a sense of the history of Winnipeg. It sheds light on how Winnipeg has progressed over the years from its early days when Nellie McClung was speaking out on women’s rights at the Walker Theatre.

As a repository of local history, it is also important to understand that many of the Citizens Hall of Fame inductees’ legacies still carry on in Winnipeg. Part and parcel of why they do is because of the institutions they had a major role in setting up.

This year’s inductee, Dr. Allan Ronald, must have been beaming after Winnipeg gained worldwide attention when the National Microbiology Laboratory’s developed of a life-saving vaccine for Ebola.

Just this past weekend, the Canadian Museum for Human Rights (CMHR) celebrated its first year of operation. It, of course, was the brainchild and vision of 1999 Citizens Hall of Fame inductee Israel Asper. Asper’s vision and ideal motivated and inspired many Winnipeggers, Manitobans and Canadians to donate to its construction. The CMHR became the first national museum built since 1967 and the only one to be erected outside the Ottawa Capital Region.

REALTORS® in Manitoba and across the country believed in Asper’s dream of a museum where human rights education would be integral to Canada’s future. They donated $2 million to the Friends of the Canadian Museum for Human Rights.

Winnipeg Mayor Brian Bowman partnered with CMHR and held a two-day racism summit at the museum to set the groundwork and basis for an action plan on how Winnipeg can deal more effectively with racism.

Last weekend the annual Terry Fox Run was held in Assiniboine Park where Terry’s likeness is on display at the Citizens Hall of Fame site. If you look closely enough, you will see letters making up the word marathon to commemorate his Marathon of Hope.

Terry Fox was inducted into the hall of fame in 2010. It was a special induction ceremony with Betty and Rolly Fox, family members and relatives all gathered to recognize Terry’s amazing contribution to cancer research in his fundraising run across Canada. Betty Fox mentioned that Terry may well have made it to his hometown of Winnipeg if not for some of the detours he took to raise more awareness and funds for cancer research.

Fox has left an incredible legacy that has not gone unnoticed since his Citizens Hall of Fame induction in 2010. This year, the provincial government passed the Terry Fox Legacy Act, establishing the first Monday in August as Terry Fox Day. It also states that the second Sunday after Labour Day will be known throughout Manitoba as Terry Fox Run Day.

For more information on WinnipegREALTORS® Citizens Hall of Fame program and its 42 inductees, go to winnipegfame.ca

If you are at the hall of fame site and curious to know more about any inductee each has a QR code under their respective bronze plaque.  Just place your smart phone in front of the code and it will bring up the inductee’s Web page.