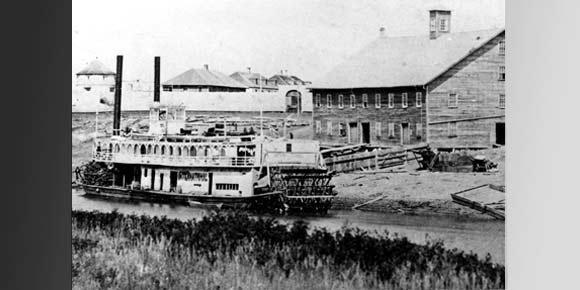 The newspaperman, noted for interjecting humour in his writing and as being the friend of virtually everyone he encountered in Canada and abroad, was born in Trenton, Upper Canada (now Ontario), on August 23, 1847. After moving to  Whitby, George Henry Ham was employed as a reporter for that community’s Chronicle newspaper, but failing health caused him to undertake a number of other occupations, including a stint as a sailor on the Great Lakes in schooners owned by his father-in-law. What he quickly discovered was that the continually churning waves of the lakes made him constantly seasick. He never got his sea legs so he was forced to commit to the stability of life on firm land.

Ham then worked briefly for newspapers in Guelph and Uxbridge and served as a correspondent for Toronto newspapers, but he was still searching for a new direction in his life that suited his talents.

In May 1875, he set off “for some western spot not then determined on,” which in the end happened to be Winnipeg, where he arrived “with four dollars in pocket, ten of which I owed,” according to his autobiography, Reminiscences of a Raconteur, 1921.

Ham was aboard the steamer International travelling from Moorhead to Winnipeg, when one of the more infamous incidents involving steamboat traffic on the Red River occurred. It was his introduction to the Canada’s Wild West and set the stage for his later interactions with major historical happenings in the region.

The International was a steamer in the Red River Transportation Company (nicknamed the “Kittson Line” for its frontman) fleet, which was jointly owned by Donald Smith, Norman Kittson and J.J. Hill who colluded to keep the highly-profitable steamboat traffic on the Red firmly in their hands. They were so intent upon retaining a monopoly that the International was used to ram the Manitoba, a steamboat operated by the newly-established rival company, the Merchant’s International Steamboat Line (MISL), founded by Winnipeg and St. Paul businessmen. The MISL shareholders were focused on busting the monopoly used by Smith, Kittson and Hill to inflate freight costs on the Red River.

Using a system of scare tactics, as well as favours from and bribes to U.S. border officials, the trio sank the new line — physically and financially — to maintain their monopoly. Not only did the trio bring down the rival steamboat line, but they added insult to injury by taking over the only two ships that the company built.

Ham wrote in his 1921 book, Reminiscences of a Raconteur, that the Manitoba was rammed during its return trip to the U.S. “In rounding the bend (near LeMay’s point, eight kilometres south of Winnipeg), the International, doubtless not unintentionally, made a straight run for her, struck her under the guards, and she partially sunk. I was unceremoniously thrown out of my berth, and rushed to the cabin, which was the scene of wild confusion and uproar.”

Ham recalled that one panicking man, shouting that the International was sinking, was walloped on the ear by the captain, “which knocked him down.” The captain said, “You’re a dom liar. It’s the other boat that’s sinking.”

Fortunately, the Manitoba didn’t go completely under and all the crew and passengers made it to safely ashore, but the steamboat company was figuratively sunk by the incident.

Arriving in Winnipeg, Ham was first offered a position as a printer for the Free Press. As he explained it, he “told a joke or two and asked for a job. Mr. (Frank Oliver ( a future federal cabinet minister) said he liked the jokes and also his style, and engaged him then an there ...”

His first impression of the then town posing as an urban centre was that, “Winnipeg is a live wire city. That doesn’t have to be proven.”

Ham said the city was filled with, “Big men, come together with big purpose. Their ideas were big, and they fought for the realization of them. They struggled for place and power and advantage, not with regard to the little, isolated village (of 1875) which was the field of their activities and endeavors; but always with an eye to the city that now is ...

“They saw what was coming; they were there to bring it.”

Just two years before Ham’s arrival and merely a town in terms of population — boasting just 1,869 people — Winnipeg was incorporated as a city on November 8, 1873. From such humble beginnings, a thriving city would eventually emerge as Ham duly noted. When Ham came to town, the nebulous city had 5,000 people — 3,031 was the assessed number with a 2,000 person floating population.

Ham wrote that newcomers such as himself were warmly welcomed in Winnipeg and were made to feel right at home, and he was grateful to be in the city at a time when excitement about its future was building in intensity.

He didn’t remain a printer for long, and soon he was the “city editor, telegraph editor, news editor, reporter, proof reader and exchange editor.”

Ham’s many roles with the Free Press reflected the small staff then on the city’s dailies, who were expected to fill a multitude of positions.

“It would be a mistake to imagine,” wrote Ham in his autobiography, “that the Winnipeg of the early ’70s was a city of angels. It is a regrettable fact that some, if not many, of its leading citizens may fairly be described as otherwise.”

Ham said that “many legitimately interesting episodes of the old days must go unrecorded, rather than the men of enterprise, energy, foresight and patriotism who put Winnipeg on the map in the years from ’71 to ’82 should be misunderstood.”

The writer thus admitted that he engaged in self-censorship when writing about an earlier era in the city’s history, at a time when the community was led by less than perfect human beings.

“The men who, so to speak, put the ‘Win’ in Winnipeg deserve the best that those who are the heirs of their efforts and successes, or even failures, can say or think of them. The occasion was great, and they were men of the occasion.”