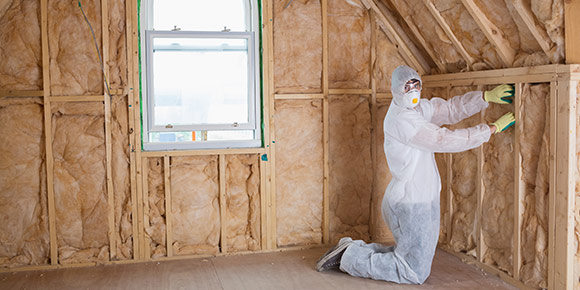 Our knowledge of the properties of different types of insulation has come a long way since fibreglass was trademarked in 1938 and began to be used widely for house insulation in the ’50s, replacing mineral wool (now sold in Canada as Roxul) because it was less expensive.

Though fibreglass remains the No. 1 form of insulation used to insulate homes in North America, it is slowly losing ground to batt-type mineral wool and to a host of rigid polymer panels and spray foams, as well as loose-and blown-in cellulose products.

The downside to fibreglass is that the stated R-value (thermal resistance) is much lower in service because warm air (heat) moves freely through its open weave. Another con is that insulating batts must fit snugly between two-by-four or two-by-six studs to avoid gaps. As studs are often not precisely on 16 inch or 24 inch centres, it is impossible to stretch the batts to fit between the studs, resulting in a void that must be filled by stuffing pieces of fibreglass into it or sealing it with spray foam or some other form of insulating material. Other raps are that fibreglass is difficult to fit tightly into rim joist cavities and is not particularly efficient for sealing small holes or areas that are hard to access.

Roxul, also known as mineral wool, rock wool, mineral fibre and other names, has an advantage over fibreglass in that it is denser, non-combustible and can be stretched to fit between off-centre studs. The densest Roxul produced makes a good sound barrier for interior walls and floors because noise will not move easily through the tight batts, spun from basalt (volcanic rock) and slag (a by-product of the steel and copper industry).

Moreover, the insulation has a higher R-value than fibreglass per inch of thickness. For example, fibreglass designed to fit between two-by-four 24-inch O.C. studs is rated at R-20, while Roxul mineral wool is rated at R-22.

A con against Roxul is that the batts come apart quite easily, making it difficult to install. For the same reason, even though it can be cut precisely with a serrated knife, it is not the best material to completely seal joist cavities. For the budget conscious, it is a little more expensive than fibreglass. This extra cost is not significant for a small job, but it can be considerable if a new house or large reno is to be insulated.

In my experience, loose-fill insulation, which is commonly available in bags or bales as cellulose, fibreglass, rock wool, vermiculite or perlite beads is not cost-effective because it settles after installation in attics, reducing R-value.

Moreover, when poured into existing walls, there is no way to know how much of the wall cavity has been filled with the insulation, especially true of walls that have been cross-braced by two-by-four or two-by-six members to add rigidity or increase nailing area for vertical interior or exterior coverings. Finally, because it is a loose-fill, the particulates have large air gaps between them, allowing air infiltration during high winds.

Blown-in insulation is basically loose-fill that is added to attics and walls with a machine that can be rented from big-box stores. The main advantage to blowing loose-fill into attics is that the material can be packed tightly into areas that are almost impossible to access by spreading loose-fill by hand. These include low-pitch roofs where there is insufficient space to work and in spots where rafters or trusses sit on a wall plate. Wall cavities can be more adequately filled by drilling blow-holes between studs at several different heights to ensure the entire wall is fully packed with insulation.

DIYers should be aware that this is a two-man job, with one person required to operate the spray hose and another to fill the machine’s hopper with insulation. Another caveat is the hose operator must wear goggles, gloves, tight fitting clothing and a good quality air mask. The helper should protect himself in a similar way.

Though pricey, rigid polymer panels composed of polystyrene or isocyanurate and, in some cases, covered by a shiny foil vapour barrier and heat reflector, have become popular as insulation used under the siding of the exterior covering of a home because of their high R-values. The panels are sold in different thicknesses, though the widths are generally two feet to four feet and the lengths eight feet to 10 feet.

For basement applications, they can be glued directly to a concrete wall with an adhesive such as PL300 sold in most hardware and lumber stores. Furring strips are added to the insulation to allow a finishing material that meets fire code to be nailed or screwed in place.

One of the best basement and ceiling polystyrene products I have encountered is Quik-Therm Concrete Insulation System (CIS) sold by Brock-White in Winnipeg. This ingenious system interlocks polystyrene panels with polymer studs to form a wall that is a vapour, radon and radiant barrier, all in one. The foil covered (back and front) panels are joined to the studs by a long tongue and groove joint sealed with spray foam. IDP concrete anchors hold the assembly snuggly to concrete walls.

One pro for this system is that thermal bridging caused by wood or steel studs is eliminated, resulting in a wall that is warm to the touch from top to bottom. Though more expensive than a traditional stud and fibreglass wall, an average size basement can be completely insulated in a day by professionals, saving money on installation costs. CIS is also  DIYer friendly.

Another pro is that because all the parts are integrated, air leaks, another cause of heat loss, are eliminated. Moreover, a CIS panel can be cut to exact dimensions with a handsaw, builder’s saw or serrated bread knife, making it an ideal material for filling joist cavities. Blocks are cut slightly smaller than the length and width of the cavity and then sealed around the edges with a can of low expansion spray foam.

Speaking of spray foam, though it is at least three times more expensive than most other insulations, it has the advantage of completely sealing attics and exterior walls from air and moisture leaks. Moreover, closed cell polyurethane foam has an R-value of about 6.5 per inch, the highest of all the residential insulations.

One con is that if the two chemicals that combine to create polyurethane foam are improperly mixed, the result is a compound that will never completely set and will have to be removed at high cost. If you decide on spray foam insulation, make sure the installer has the right credentials, approved chemicals, proper machinery and trained crew to produce a trouble-free job.