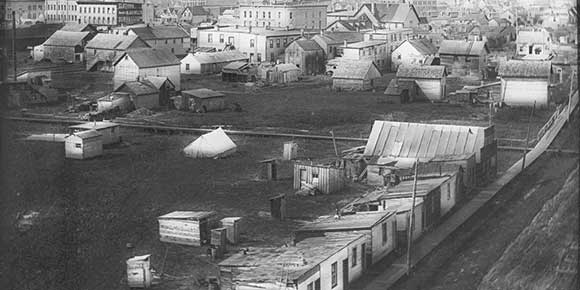 At a January 7, 1884, St.Patrick’s Benovolent Society meeting, Colonel James “Jim” Coolican outlined his plan “for the relief of many of the poverty-stricken and half-starving people in the city” — a situation exasperated by the land boom’s collapse in the spring of 1882.

Coolican told those gathered at the Bellevue Hotel that he had spoken to many hotelkeepers and butchers, “and a good deal of refuse but good food and scrap meat could be gathered up and converted into strong and substantial soup” (Manitoba Free Press, January 8, 1884).

He was promised two train carloads of wood at no cost by a Mr. Corrigan to fuel the cookstove in the soup kitchen.

Coolican proposed that tickets be printed up saying, “Good for one quart of soup and a slice of bread,” and sold to leading citizens at five-cents each.

“He had no doubt many people would buy a few dollars worth of tickets, and when any man applied for money or was without work and hungry, they could give him a ticket to go and get a good bowl of soup. With the money derived from the sale of tickets, bread could be purchased and the actual costs of the establishment met.”

Coolican said there was a need to feed 400 to 500 “poor people” during the winter and spring.

Under Coolican’s direction, the society established the soup kitchen “on McDermot Street, in the store next to the Western Hotel ... The interior of the store has been fitted up with a long lunch counter, in the rear of which are the store room for supplies and clothing, and the kitchen” (Free Press, January 16, 1884).

According to the newspaper, the soup kitchen was supported by a number of local businessmen, who donated the materials to furnish the facility, and provided clothing and food as well as money.

“Before sampling the viands placed before them he addressed those present (the city’s leading businessmen), laying the whole scheme of the enterprise before them, and calling upon them to support it.”

In 1884, a Manitoba Free Press reporter toured the shanties north of the CPR tracks with Coolican, who was then the vice-president of the St. Patrick’s Benevolent Society.

The reporter, who wrote the article about Winnipeg’s needy residents under the headline, The City Poor (January 22, 1884), said Coolican devoted a portion of each day visiting the shanty dwellers, “and has come to be regarded as a ministering angel among his humble charges.”

The reporter wrote that they first visited a shanty occupied by a stout Irish woman, “covered with soot,” who “sat disconsolately on the edge of the bed, while an asthmatic old cooking stove, filled with soft coal, was in a state of violent eruption, and sent out clouds of smoke from every point except the chimney.”

The woman and her two “little boys with very dirty faces” endured a home plagued by noxious smoke that was so intense it threatened to suffocate them or otherwise compromise their health.

With help from neighbours, Coolican had the offending appliance removed from the shanty. The woman then produced a $10 bill to acquire a new stove. “This woman’s husband was earning $60 a month, and when she handed over the money for the stove she took the bill from a respectably sized wad which she had concealed about her person.”

With such a wealth of bills, the reporter claimed, “There was no excuse for her squalid wretchedness.” But his judgement was made without knowing or understanding the family’s true circumstances.

The squalid conditions under which the woman’s family lived was the exception rather than the rule, according to the reporter. He found most of the shanties consisted of a single room that was very neat and clean, although most of the furniture was of a “homely description.”

In other shanties, they “found children, pinched and hungry, to whom the soup kitchen had already proved a Godsend.”

In yet others, they met men who hadn’t taken a meal for two days as well as women slowly sinking into starvation.

“To all of them, Mr. Coolican gave orders on the soup kitchen, and promised to look up a supply of clothing for the women and children, of which many were in need.”

The reporter said nearly all the men they encountered expressed a desire to find work, but had been unsuccessful in their job quests.

“In one shanty was a man with a broken and bandaged foot. He had neither fire nor food, and was not able to work for either. He was dependent on the good offices of his neighbours, who were in all conscience poor enough themselves.”

One woman didn’t “possess a vessel in which her little girl could carry soup from the kitchen.” The woman had been a music teacher, but her health had deteriorated and she was compelled to perform odd jobs until her strength returned.

Coolican made arrangements for the woman and her daughter to have meals delivered to them from the society’s soup kitchen.