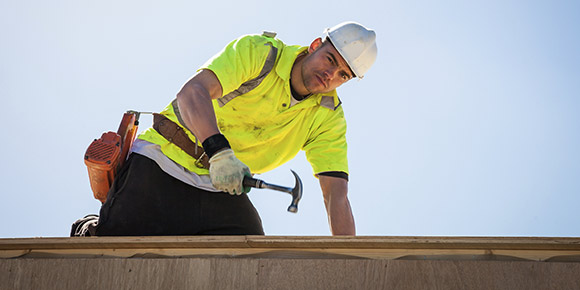 Repairing a shed roof with a pitch of two-in-12 or less may require more than adding a patch of roll asphalt material or replacing flashing around a chimney.

Many years ago, a bathroom with a 200-square-foot shed roof was built on to our cottage. The roof has a slope of a half-inch-in-12, meaning it is almost flat, making drainage slow or non-existent in some areas.

Over the years, leaks in the roll roof were first repaired with asphalt patches covered with generous applications of roofing compound. When the patches failed, the old roll roof was covered with a new layer of the same material.

When the roof began to leak again during this summer’s downpours, I decided to count the layers of roll roofing covering the roof’s deck — there were seven. In a few areas, there were noticeable declivities in the roofing caused by the weight of pooling water compressing the spongy asphalt and, in some places, leaking through to the deck while staining the ceiling tiles inside the cottage, as well. I decided the time had come to tear off the seven layers of roofing so that I could check the deck and rafters for rot.

The job, to say the least, was more labour intensive and time consuming than I had originally calculated, but that seems to be the nature of all renovations. Each layer was comprised of two rolls of roofing at 86 pounds each for a total 172 pounds x seven layers or 1,204 pounds in total.

The lesson here is to have a ground sheet cover on which to throw the pieces of asphalt, as it doesn’t come off in neat rolls. Even better is a pickup truck that can be driven to a landfill for direct disposal of the debris.

Some of the tools I required included a pry bar, a box cutter, tin snips, a hammer, new flashing, an asphalt trowel and a builder’s saw with old and new 7 1/4-inch blades. I removed the first layer of roofing by labouriously cutting through the asphalt where it was tucked under the main roof shingles, as well as under a sheet of flashing that sealed a small chimney to vent a propane water heater in the room below.

Working on a roof in direct sunlight on a hot summer day is not my idea of a good time, so I sped up the removal process by using my builder’s saw to cut through the remaining six layers of asphalt in one go. This tends to be very hard on blades. The best method is to use old, non-carbide tipped ones that are cheap and can be discarded after use.

I had to cut long parallel kerfs spaced about every 12 inches apart to sufficiently loosen the layers that had been spot nailed and tarred at each level. (Wear safety glasses if you use this approach.)  I set the blade depth by trial and error until it lightly scored the top of the deck. The sheets did not all peel off at once, but removing them was easier than trying to tear off a full 36 inch wide by 80 inch long sheet all at once.

When the deck was finally bare, I noted that the one-by-six spruce boards had rotted in the spots where rain water had puddled and eventually leaked through the asphalt covering. The boards were also rotten at the ends because drip flashing was not used to protect them by channeling water in to the gutters. The rafters were fir two-by-sixes on 16-inch-centres and, because of fir’s ability to withstand rot, they were in good condition. Thankfully, there was no fibreglass insulation between the rafters to soak up and trap moisture, an ideal condition to germinate fungi.

I replaced all the deck boards with half-inch exterior plywood because, in my opinion, OSB is an inferior product that will begin to deteriorate at the mention of water or condensation.

Instead of reapplying the old-style, messy N.I.S. roll roofing that I had arduously torn off the deck, I decided to use a newer product manufactured by the Henry Company of Scarborough, Ontario, called Lo-Slope roof-in-a-roll. The material is self-adhering, granulated polymer membrane sold in one or two ply, with 15- and 20-year warranties, respectively. Though more expensive than asphalt roll roofing, the warranties are nearly two to three times that of asphalt’s eight-year life expectancy.

Applying Lo-Slope is similar to laying Ice & Water Shield. A peel-off backing is removed from the membrane to expose the adhesive. Depending on the size of a roof, this is usually a two-man job because the adhesive grabs as soon as it touches the deck’s surface. For this reason, it’s best to precut the membrane to length and slowly peel away a little of the backing while laying the membrane on the deck. This requires a helper to hold the sheet in alignment as it is smoothly adhered with hand pressure. Cut-outs in the membrane for chimneys and other vents can be accomplished with a box cutter.

Aside from its ease of application, the polymer membrane has a memory that lets pock marks caused by hail to spring back to original shape.

Caveat: golf-ball-sized hail, such as we have experienced this summer, will damage any roof material from polymer membrane to wood to asphalt to metal and many others. Be this as it may, Lo-Slope is a convenient and less expensive alternative to metal; and asphalt shingle manufacturers will not warranty their products if applied to a roof with less than a three-in-12 pitch.