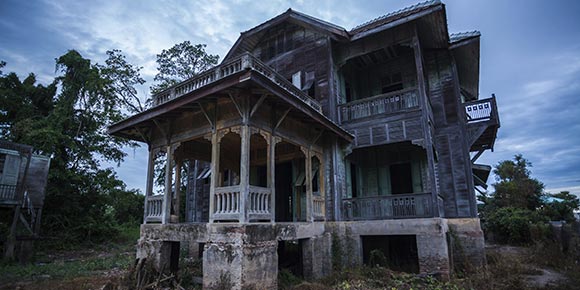 In the realm of the bizarre, this new phenomenon south of the border may rank among the most bizarre of trends in the real estate industry.

Inman News (an article subscription service used by the REN) ran an article last week under the headline, Real Estate Agents Turn to ‘Spirit Sweepers’ for Haunted Houses, claiming that some American agents were turning to “energy healers” to facilitate the sale of houses that had allegedly fallen under the spell of a malevolent spirit.

Astonishing as it may seem, the self-proclaimed energy healer had two years earlier been a market researcher for the mainstream national newspaper, USA Today, until retiring and taking up his new gig to counter the bad vibes of ghosts lingering in houses and disrupting the living.

According to Quinn, “dark energies” are often associated with a death, divorce or an event happening even before a house was built, which clings to the property.

The article cites the example of a 1920s house in Dallas, which resembled a 16th-century castle, “complete with decorative turrets, plaster moldings, stone fireplaces and a moat.” The home also had secret entrances that were used during the Prohibition Era to sneak homebrew in and out.

An accompanying photo clearly shows the turrets, which probably had more to do with having a view to warn of potential revenue agents raiding to confiscate booze rather than harbouring some dark force. In fact, it’s a charming looking house, having more to do with the personal — if not somewhat weird — taste of the home builder.

Still, real estate agent Scott Carlson called in the ghost buster when  the seller placed it on the market and alleged the house was responsible for his depression.

Apparently, the bad juju arose because the original owner died in a tractor accident and the house had been foreclosed upon twice.

When Quinn had completed his session, the energy of the house had improved to the point that the seller decided to keep it.

That alleged hauntings can have a negative impact on a house sale is not new. In Winnipeg, there was a famous case that became known as the “Free Press Ghost Story.” An October 23, 1905, article appeared in the Free Press just in time for Halloween. It said: “There is a ghost in the north end of the city that is causing a lot of trouble to the inhabitants. His chief haunt is in a vacant house on St. John’s Avenue near Main. He appears late at night and performs strange antics so that timid people give the place a wide birth ...” The information was gleaned from a brief police report that mentioned that some people believed the place was haunted, but an enterprising reporter decided to play fast and lose with the facts of the case.

At the time, owner Rachzel Miriam Gomez Nagy was attempting to sell the property, but when the story broke, she could find no takers. Her business manager, Hugh C. Pugh, had the property listed with all the real estate agents in Winnipeg, but received no offers approaching the market value of the house.

“He was negotiating with different parties for the sale of the property, but was unable to close the deal on account of the purchasers reading the report and refusing to close in consequence” (Morning Telegram, October 25, 1906).

One prospective purchaser had put down $250 on the sale price of $11,000, but forfeited his down payment and refused to complete the sale due to “the report of the place being haunted.”

As a result of the article, hundreds of  curiousity seekers in an attempt to get a glimpse of the spectre, they did damage to the property, which forced Pugh to sleep on the premises to prevent further harm. Ironically, he became the “ghost” in peoples’ imaginations.

Nagy sued the Free Press for damages resulting from the article. It was a case that went all the way up to the Supreme Court of Canada. The justices said the reporter and editor had for amusement taken a brief reference and become reckless with the facts. Supreme Court Justice John Idington said there was “abundant evidence of malice and hence a legal remedy for such a palpable wrong.” Nagy had won her case.

The many court appearances of the case solicited a flurry of amusing accounts by witnesses involving whether or not ghosts existed. The different judges in the cases asserted that the existence of ghosts could not be proven in a legal sense and their existence had to be solely attributed to a belief system.

A 2014 Harris poll in the U.S. found that 42 per cent of Americans believe in ghosts or spirits, which may provide an explanation for the appearance of “spirit sweepers” to cleanse houses of dark energies.

Hagey’s Inman News article told of real estate agent Leslie Lang co-ordinating a “spirit sweeping” after an alleged haunting that almost drove a San Jose, California, couple out of the home she had sold them.

“They couldn’t sleep. Their dog barked all night at something in the master bedroom (shades of the movie Poltergeist). They felt a weird energy in the room. On its own, the living room TV popped out of the credenza, turned on and began airing sports events.”

Contacting the widow of the seller, Lang was told that her husband had died in the master bedroom and he loved to watch sports on a living room TV.

“It was obvious that there was a presence there,” said Lang. She thought that the seller’s husband’s spirit didn’t know his wife had left or where to go. Lang’s “spirit sweeper” was a feng shui professional who performed a ceremony to cleanse the house, and the house buyers had no problems afterward.

Studies have linked belief in hauntings to paranormal-related TV shows, and they’re proliferating. Most people would be familiar with the “ghost shows,” alleging every sudden sound or a flickering green light seen from using a night-vision camera represents the presence of a spirit.

Essentially, when some people are told a spectre exists in a house or building, they’re convinced it’s a fact, although logic would discount such a belief.

“What we have is people trying to make sense of something that, to them, seems inexplicable,” said Christopher French, a professor at the University of London. “So you get the misinterpretation of noises or visual effects that do have a normal explanation, but not one that people can think of. People assume that if they cannot explain something in natural terms, then it must be something paranormal” (Why Do People Believe in Ghosts, by Tiffanie Wen, The Atlantic, September 5, 2014).

While Americans turn to “spirit sweepers,” the record shows that Canadians are more inclined to side with Nagy and take their house haunters to court.