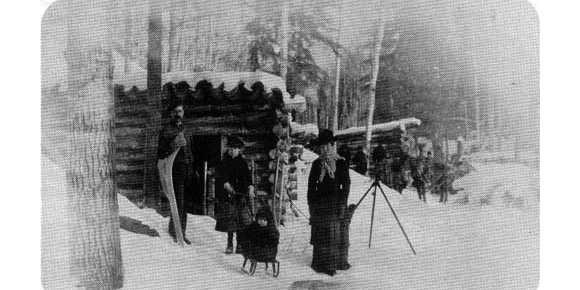 It had been months without a single new case of smallpox being reported. Yet, to the best of the colonists’ knowledge, the quarantine barrier erected by the District of Keewatin government at Netley Creek was still in place and they were resolved to stage a protest to force the authorities to allow them to re-establish contact with the outside world. Destitute, starving and plagued by scurvy and dysentery, the Icelandic immigrants believed they had suffered long enough.

A group of 100 young men and women had made up their minds to storm the barricade. But when they arrived, they discovered to their astonishment that the military garrison, stationed at Netley to enforce the quarantine and prevent the spread of the “loathsome” disease, had been withdrawn on July 21,1877, a fact that the authorities had neglected to tell those trapped behind the barrier since November 1876.

In early July, John Taylor, the federal agent in charge of the colony, wrote to Ottawa complaining that the Keewatin Board of Health was still maintaining the quarantine, although the last reported case and death had occurred in February, and by April the colony was effectively free of smallpox.

On August 1, Charles Alphonse Pantaléon Pelletier, the Canadian minister of agriculture, wrote to Manitoba and District of Keewatin Lieutenant-Governor Alexander Morris that the barrier should be immediately removed since it was “extremely cruel and unnecessary.” It’s evident that Pelletier was as much in the dark about the barrier being removed as the Icelanders.

In an 1878 report to the Keewatin Board of Health about the 1876-77 epidemic, Taylor stated: “The oppressive quarantine, so unnecessarily prolonged, has done more serious injury to the colony than can be repaired easily ... No quarantine procedures of a like character would have been submitted to for half the time by Canadians.”

In his book about New Iceland (Nyja Island), Gu∂jón Arngrimsson wrote that the smallpox epidemic and it’s consequences paralyzed the colony that was established in 1875 along the west shore of Lake Winnipeg. “Due to the long isolation it brought, the colonists were forced to eke out a meagre existence on government loan supplies and any fish they could catch. Physically, its effects would remain etched on the faces of many of the Icelanders in the form of pock marks they took with them to their graves, but the mental scars were probably much deeper.”

The aftermath of the disease was so devastating and the disillusion with the government’s reaction was so deep-seated that it almost led to the total abandonment of the settlement by disgruntled settlers.

Among the aboriginal residents of the colony, the suffering was even greater. While 102 Icelanders were recorded to have died from the disease, there are no detailed figures for First Nations people, but it is believed that as many as 500 perished during the 1876-77 smallpox epidemic. In fact, the First Nations settlements along the White Mud River (now Icelandic River), at Sandy Bar, just south of the river’s mouth on a spit of land jutting into Lake Winnipeg, and on the Big Island (now Hecla Island) were wiped out, never  again to be re-established.

In Viruses, Plagues, & History, Michael B.A. Oldstone wrote that smallpox was the most universally feared disease, and in many instances changed the course of history, such as Fernando Cortez and his Spanish Conquistadores  overtaking the smallpox-riddled Aztecs. Across large swaths of North American, the path for European settlement was cleared by aboriginal people being decimated by smallpox and being unable to challenge the newcomers’ movement westward. And such was the case at Sandy Bar and the Big Island.

Until it was eradicated, smallpox killed 300 million people in the 20th century alone, which is three times the number killed during the two major wars of the last century. For those who survived, their ordeal was made visible by the multiple scars that pockmarked their faces.

It was this atmosphere of fear which prompted the authorities to react so harshly to the sufferers in the Icelandic Reserve in the District of Keewatin that would later become part of the province of Manitoba.

In consultation with “friends, familiar with the Indian dialect” (Cree and Ojibway), Morris recommended the name “Kee-wa-tin,” (The Land of the North Wind), as suggested by James McKay (reported in the Manitoba Free Press, December 1, 1876).

The Keewatin Act established the territory north and east of Manitoba, which was then dubbed the postage-stamp province due its relatively small land area of 33,280 square kilometres. Under the federal act, the district was governed by an appointed council headed by the Manitoba lieutenant-governor, with its seat of government based in Winnipeg.

Morris admitted that the hurried appointment of councillors was a direct result of the smallpox outbreak in New Iceland.

“The position we occupy at the moment, is one of grave responsibility, and the circumstances in which we are placed are exceptional,” he said during the first council meeting. “You are aware a large colony of Icelanders has been established on the western shore of Lake Winnipeg within Kee-wa-tin ... I obtained authority to send physicians to them, and on their report of the fatal character of the disease, I telegraphed to the Privy Council (federal cabinet), suggesting that as the District of Kee-wa-tin had not been organized, the Privy Council ... pass a Statute, forming a Board of Health restraining communications with the District” (that is, a quarantine).

The epidemic forced the Keewatin Board of Health to undertake “a massive mobilization of state resources to stem the spread of the disease,” wrote Ryan C. Eyford in his article, Quarantined Within a New Colonial Order: The 1876-1877 Lake Winnipeg Smallpox Epidemic, Journal of the Canadian Historical Association, 2006. “In the first instance this effort was directed toward the containment and treatment of smallpox within the Icelandic Reserve and adjacent locations.”

In the minutes of the Council of Keewatin meeting, Morris said: “I remind you that — the circumstances of the emergency are favorable, inasmuch as the disease is confined to settlers and Indians remote from any large centre of civilization, and I believe that by enforcing the measures I have adopted for the prevention of intercourse with the infected district (a quarantine), and taking other prompt and vigorous steps, which you have the power to do, the disease may be confined to the locality where it originated.”

In response to Morris’ speech, the council appointed a board of health made up of Lt.-Col. W. Osborne Smith as chairman. Dr. S.J. Bedson was made the health officer and justice of the peace for Keewatin, and constables were appointed to enforce laws.

“The health officers at the Netley Creek station regulated the passage of people and goods from north to south,” wrote Eyford. “Before being allowed to pass individuals were forced to remain at the quarantine station for a fixed period of time and to discard their clothes and other possessions, which were often destroyed. Those who were deemed infected were confined to hospital.”

An oft-repeated story emerging from the quarantine period is that some enterprising Icelanders intentionally visited the station to replace their tattered clothing with new, free duds.

While the smallpox virus gains entry into the body through the respiratory tract — making it highly contagious — once lesions erupt through the skin, the virus can contaminate clothing, bedding, dust and other inanimate objects and remain infectious for months (Oldstone).

The Icelandic Reserve was granted to the colonists by the federal government in October 1875. The reserve that the Dominion (Canadian) government established, for the exclusive use of Icelandic immigrants, stretched 16 kilometres inland from Lake Winnipeg from the then border of Manitoba at Boundary Creek, near today’s Winnipeg Beach, and northward for approximately 100 kilometres. The reserve also included the Big Island. The goal of the federal government was to spread agriculture northward from the Manitoba border through the use of homogeneous European settlers.

The first group of some 200 Icelandic settlers arrived in 1875, who soon thereafter established their principal settlement at Gimli. The colony’s first choice was originally to have been along the White Mud River, but the captain of the steamer Colville, which was towing the barges with the Icelanders aboard, dropped them off at Willow Point, a short distance from Gimli, and the half-way point to their final destination, when an early winter storm struck. The premature landing arose from the captain’s desire to reach the Red River before the onset of more bad weather prevented the steamer’s passage to a safe harbour.

When 1,200 more settlers arrived in July and August 1876, they spread out to the other areas of New Iceland, including the White Mud River and the Big Island.

It was this later movement northward that brought smallpox to New Iceland. When the Icelanders were sailing from their homeland to Canada, smallpox was already raging in Europe’s and North America’s port cities. It was the passage of hundreds of thousands of immigrants aboard ships bound for North America that facilitated the spread of the disease to the New World as far west as the port of San Francisco. Along the St. Lawrence River in the cities of Quebec City, Montreal and Sherbrook, smallpox cases were being reported in 1876.