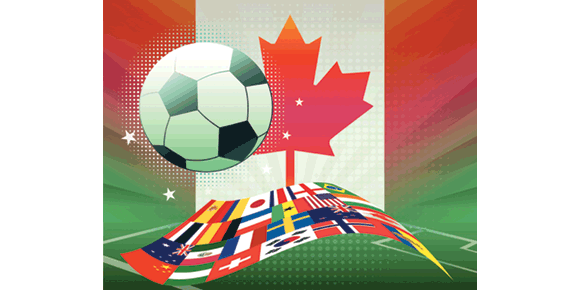 While the big soccer-world news at the start of this week was that Sepp Blatter quit as FIFA president, shortly after being elected to his fifth term as the head of the scandal-plagued international governing body for soccer (football outside of North America), it will not detract from the play on the field during the FIFA Women’s World Cup (WWC). The tournament gets underway on June 6 at Commonwealth Stadium in Edmonton when Canada meets China.

The prediction is that hundreds of millions of viewers will tune into the television broadcasts during the tournament. It may not come near to matching the billions who watch the men’s version (it’s even bigger in TV viewer numbers than the Olympics), but it’s a big event that has been getting bigger every four years that it’s played. Since its inception in 1991, the Women’s World Cup has been growing in popularity, which is reflected in the expansion of the teams participating to 24 from the 16 that appeared in the last World Cup held in 2011 in Germany.

A total of 52 matches will be played across six Canadian venues — Edmonton, Moncton, Montreal, Ottawa, Vancouver and Winnipeg — making it the largest and longest (June 6 to July 5) ever World Cup tournament for women.

In 2011, Japan surprised the U.S. in the final to take the cup. In that final alone, the U.S. television audience was 13,458,000 viewers. The American side is always among the favourites and has claimed three Olympic gold medals and two World Cups.

In 1999, when the U.S. hosted the tournament, 90,000 spectators crowded into the Rose Bowl to watch the Americans in a shootout over China.

Canada has a less stellar record in the WWC. In fact, the women’s side didn’t qualify in 1991, and its best finish was fourth in 2003, losing to the U.S. in the bronze medal game. In the 2011 WWC, Canada finished last among the 16 teams entered, having failed to win a game and so didn’t advance from the group stage.

But this year’s team is different. It has more confidence, arising from the London Summer Olympic Games in 2012 after its diasterous showing a year earlier in the WWC hosted by Germany, and the injection of coach John Herdman to give the women a new sense of purpose on the soccer pitch. In 2012, Canada,  led by Christine Sinclair, came within a hair’s breadth of defeating the highly-favoured American side in the semi-finals. In fact, Canada was ahead 3-2 (all goals by Sinclair) in the closing moments of the game when it came down to the proverbial saying, “They was robbed!”

Sinclair’s third of three goals came in the 73rd minute. And then came the momentous decision — a bad call that should never have been made in the first place. Norwegian referee Christina Pedersen blew her whistle in the 78th minute with just 12 minutes and the possibility of a couple of minutes tacked on for injury time, accusing Canadian goalkeeper Erin McLeod of taking too much time to put the ball into play — termed a six-second violation. Pedersen was being harassed by the U.S. side to make the call and apparently blew her whistle in reaction to the taunts.

It was a penalty that deflated the Canadians. And it was a penalty that very few, if any, in the soccer world had ever seen called, regardless of the level of competition, never mind that it occurred during an Olympic Games semi-final to decide who went on to play for the gold medal.

The Canadian players looked at Pedersen in disbelief. The momentum that they had enjoyed was deflated by her call.

“I’ve never seen that before,” U.S. coach Pia Sundhage said after the game, as reported by Cathal Kelly for the Toronto Star.

During the ensuing free kick in Canada’s penalty area, the ball hit Canadian player Marie-Eve Nault in the hand — the zone was so crowded with players it was inevitable. But Nault’s foul wasn’t as blatant as an earlier hand ball by American Megan Rapinoe that  wasn’t called. Still, the Canadian infraction warranted a penalty kick, according to Pedersen’s ruling. Abby Wambach’s penalty tied the game at 3-3, and then the game went into extra time. In the 123rd minute, a U.S. player headed in the winning goal for a 4-3 victory.

It was later related that Canadian players had swarmed Pedersen following the blown call. Sinclair asked for an explanation and instead Pedersen giggled and had nothing to say.

“I said, ‘I hope you sleep tonight. Put on your American jersey. That’s who you played for today,’” said Melissa Tancredi after th game. “I was honest.”

All Canadian coach Herdman would say was that the game “was taken from them.”

The Canadians had played their hearts out, but the game ended in tears and disappointment for what may have been.

It was an unfair outcome, but the discouraged players shook off the disappointment and rose up to take the bronze medal. Diana Matheson scored the winning goal with less than a minute remaining to give Canada a 1-0 victory over France.

“It’s great to see Christine smiling,” head coach John Herdman said after the game (Globe and Mail article by Jeff Blair). “We have a picture in my office at home of Christine after the last World Cup with her head in her hands and the anger on her face and I said to the girls: ‘This has been my motivation. I’ll never see a player of that quality in that state after a tournament.’”

Playing on home soil this time around is a definite advantage for the Canadians.

In a friendly played last week against England at Tim Hortons Field in Hamilton, Canada beat England 1-0 on a goal by Sophie Smith. England had defeated Canada by a similar score in the final of the Cyprus Cup, featuring a number of the best  women’s teams, in March. The match and win against England is regarded as a confidence builder for the Canadian side heading into the World Cup.

Entering the 2015 WWC, Canada is ranked eighth in the world. The No.1 rank is held by Germany, the U.S. is next (it’s the first time the Americans haven’t held the No.1 spot), followed by France, Japan, Sweden, England and Brazil in the seventh position.

It will take seven games to win the WWC. After first facing China, Canada then plays New Zealand and the Netherlands in its Group A stage. Canada is the top ranked team in this group. The top two teams from each group, along with the top-four third-place finishers from all groups, advance to the round of 16. From the quarter-finals onwards to the final, only winning teams advance to play.

The Canadian side is once again led by Sinclair, one of the most prolific scorers in women’s international soccer. The Winnipegger on the team is Desiree Scott, known as “the Destroyer,” who plays in the back four as a defender.

The first games to be played in Winnipeg are on June 8 when Sweden vs. Nigeria followed by the U.S. vs. Australia.

So forget about the woes of FIFA and tune into what should be the best WWC ever hosted by a nation — that is, Canada.