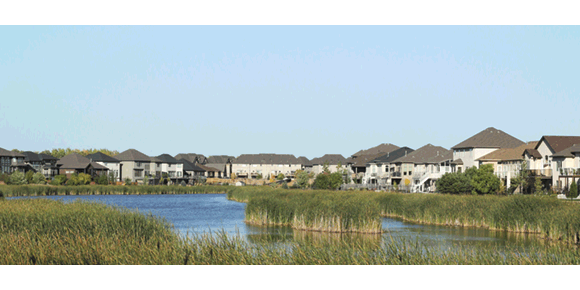 One point WinnipegREALTORS® will continue to stress over and over again is that all markets are local, as different supply and demand factors are at play, prices, of course, vary dramatically across the country, employment conditions, taxes, immigration, and more intangibles, such as consumer optimism, can vary in any given market. Even within major markets, which encompass not only cities but rural municipalities, and represent various MLS® property types beyond single family and condominiums, there can be differences.

In the WinnipegREALTORS® market region, more sought after urban neighbourhoods have consistently shown better metrics, with listings being on the market for shorter periods of time than rural properties.  Having said that, due to some strong capital region growth in the last few years, rural sales, as a portion of overall market share, have increased at the expense of the city of Winnipeg. Steinbach has become the No. 1 MLS® area for sales and listings.

Beyond pinpointing local factors as the key determinant for understanding how any real estate market is performing, what, if anything, characterizes Winnipeg’s market.  You would have to say “stability.” It has enjoyed a consistent performance based on a well-diversified economy being able to create more jobs for new immigrants coming to our province and still keep our unemployment one of the lowest in the country.

WinnipegREALTORS® tracks the annual average house price, which shows the market’s stability. Going back to 1977, there have only been two years in that 38-year period when the average house price has dipped below the prior year.  In both 1990 and 1995, the percentage drop was around two per cent which is hardly a cause for concern.

Yes, it is true that Winnipeg had a strong run from 2003 to 2010, with six consecutive years of double-digit price increases. But some unique contributing factors helped create the tightest market in the country. There was the powerful combination of a very successful provincial nominee program attracting new immigrants to Manitoba and at the same time a real scarcity of decent and affordable rental accommodations. The default was that the resale housing market had to meet all of the new demand in addition to normal market activity.

Things have settled down considerably since 2011. As has been indicated in media commentary from local MLS® market analyst Peter Squire, the MLS® market has been self-correcting over the past few years with single digit and smaller year-over-year price increases.  Supply has caught up and surpassed existing demand so that buyers are now in an enviable position to take advantage of a far more balanced housing market.

So, when you hear announcements from national housing agencies such as CMHC on April 29 that Winnipeg is high risk, you need to question where that headline grabber rating is coming from and on what basis the government agency formulated this assessment. What new national evaluation model captured what is happening in Winnipeg’s 2015 market? It has still not been explained to WinnipegREALTORS® or the Canadian Real Estate Association’s chief economist Gregory Klump what metrics were all involved.  If it was strictly on relationship of income to average house prices, there are some far higher multiples in other Canadian markets and prices have been very restrained for the last five years.

Just this week, CMHC in its second quarter housing outlook report basically said Winnipeg’s prices are stable and will only rise a modest 1.3 per cent in 2015 and 1.6 per cent in 2016. There was no mention of an overvaluation in prices. And local CMHC market analyst Dianne Himbeault’s previous remarks were that her office was not calling for a high risk of a price correction in Winnipeg.

As always, WinnipegREALTORS® will continue to provide monthly updates on MLS® market activity and tell it like it is. The sky is not falling and Winnipeg still offers some of the most affordable housing in the country.