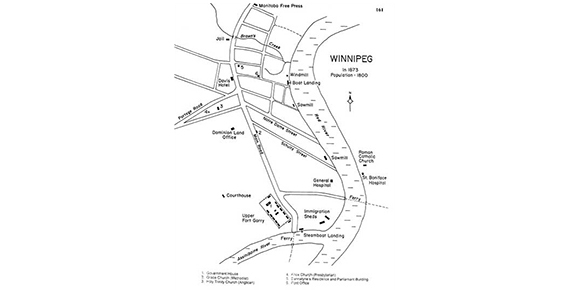 Always the astute businessman, “Dutch George” Emmerling seized upon every opportunity to expand his customer base at his Main Street hotel. In 1867, he established a Burns Club to cater to the Scots in the settlement.

Robert Hill wrote in Manitoba History: History of its Early Settlement, Development and Resources (1890) that the club met in one of the hotel’s rooms and the club was “designed to provide means of social friendship to Scotchmen ... and to strengthen the ties which bond them to their native land by the study and the character and works of the poet whose name (Robert “Robbie” Burns) the club was known.

“Though not many noble nor great attended these little meetings, it is evident that they had not only the feast of reason but the means of promoting the flow of soul (i.e., liquor).”

Hill said that a group of Scots convened at the hotel  to celebrate St. Andrew’s Day in 1867. “After a few hours spent in fraternal intercourse, happy greeting and auld Scotch sangs, in which the utmost harmony and good feeling prevailed, just as the deepening hour of twilight was beginning to shed its gloom over this little company of Jock Thamson’s bairns, some evil genius — or shall we call him Satan? — suggested the superiority of the Hielands (sic) over the Lowlands.”

The debate changed into a melee and since the room was too small to accommodate their enthusiastic support of differing opinions, they rushed into the street, “and commenced to demonstrate with fists that words failed to do.”

Reinforcements from the surrounding village arrived, some of whom chose sides and entered the fray, while others were content to watch the evening’s pugilistic entertainment from the sidelines.

“The maddened crowd surged from one corner of the street to the other, yelling vociferously, as one party or another was pummelled and forced to give way ...”

Calm was eventually restored and so ended the first ever public celebration of St. Andrew’s Day in the settlement.

Emmerling purchased a property on the west side of Main Street and erected what was described as a simple and unpretentious wayside inn primarily built of logs that became known as the Emmerling Hotel, although he referred to his establishment as Dutch George’s Place, which was a carry over from the days when he owned a shack from which he dispensed liquor and food on Post Office Street (today’s Lombard Avenue).

“George kept a very decent house and did a big business. Drinks were sixpence each and one had a choice of whiskey, rum or brandy. Very little ale was imported and Bass was the only brand then on sale” (article entitled, Much History and Tradition Centred on Early Innkeepers, Winnipeg Free Press, May 28, 1949). “A writer, referring to the quality of hard liquor sold by George, tells the story that the liquor was labelled ‘L.I.’ and the brandy ‘L.D.’”

In a Manitoba Pageant article, published in the winter of 1977, author Frank Hall wrote that Emmerling dispensed liberal doses of “potent persuasive potion,” known in the settlement as “Oh! Be Joyful,” when he bolstered the spirits of those helping him confront Spence and his followers in 1866.

The latter name was also used by Union and Confederate soldiers during the American Civil War (1861-65) to describe the foul concoctions brewed or distilled in army camps during the fratricidal conflict that claimed over 600,000 lives. There were some American veterans of the war then residing in the settlement who would have been quite familiar with this phrase for homebrew.

But there is some contradiction about the quality of drinks Emmerling poured. An explanation may be that in his later years in Winnipeg, he simply changed his ways. In their 1879 book, Ten Years in Winnipeg: A Narrative of the Principle Events in the History of the City of Winnipeg, Alexander Begg and Walter Nursey wrote that Emmerling “kept a tidy house, a good table, and pure liquors ...”

Begg would have been well-acquainted with Emmerling, since he came to the settlement in 1867, while Nursey was a later resident and by the time he arrived, Emmerling had already abandoned the community to live in the U.S.

By the late 1860s, Emmerling was not the only saloon keeper in the community, which probably led him to change to less deadly spirits to satisfy the thirst of customers. Robert O’Lone, who came to Red River from the U.S., established the Red Saloon on the west side of Main near where the street met the Portage Road (Avenue).

New York-born Hugh F. “Bob” Olone (he was not related to Robert O’Lone, although the similarity between last names and the shared use of “Bob” still creates some confusion) established a saloon and restaurant, beyond the North Gate of the HBC’s Upper Fort Garry and across Main Street from Brian Devlin’s Restaurant, in 1869.

Olone is another of the colourful characters in Manitoba’s early history and played a significant political role during the Red River Resistance of 1869-70.