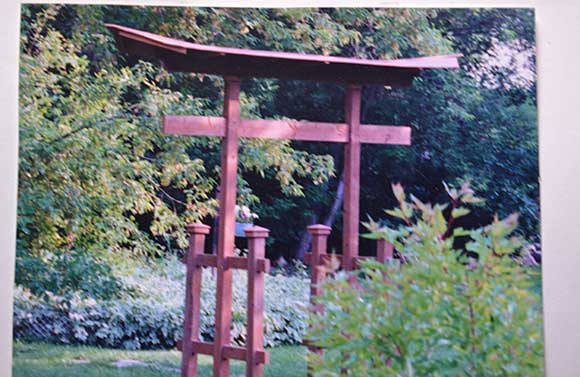 How to build an eye-catching Torii gate

Spring is a perfect time to add an eye-catching gate to your yard. A Japanese Torii gate, known as a “Gateway to Heaven,” is reasonably easy for a DIYer to build and will be the envy of your neighbours. I built mine out of treated cedar-tone lumber and western red cedar.

As you can tell from the picture, my Torii gate is comprised of two long four-by-four-inch cedar tone uprights that support the roof. Four shorter legs are attached to the uprights by two-by-four-inch horizontal stabilizers with mortise and tenon joints. I capped the tops of the legs with hand-made pyramid post caps of cedar-tone material.

The upper structure consists of a two-by-six-inch horizontal member that is mortised through both uprights. The uprights are capped with 5 1/2-inch radius circles, cut on a band saw from 1 1/2-inch thick treated cedar.

The roof is the most complex part of the gate. It is supported by two two-by-six-inch strong backs, each measuring over 100 inches in length. The bottom of the first strong back is flat and sits atop the 5 1/2-inch radius circles to which its edge is doweled, glued and screwed. The top of this strong back is a smooth arc, starting and ending at four inches wide on each end of a treated two-by-six, with a middle height of 5 1/2 inches.  I created the arc by clamping a flexible half-inch by 120-inch strip of flexible clear cedar to each end of the strong back at the four-inch marks and at the 5 1/2-inch mid-mark of the board. Using a pencil to trace the curve, I cut out the arc with a jig saw as the board was too unwieldy for one person to control on a band saw.

The second strong back is also made of treated two-by-six lumber. In this case, I traced the arc of the first member onto the bottom of the second and removed the waste with a jig saw. The two pieces fit snugly together, with the arc fitting into the concave curve above. The final cut on the second strong back forms the roof’s upward curve. In traditional Oriental architecture, such curves prevent demons from landing on a roof by shooting them skyward.

I drew this curve by clamping the ends of my flexible cedar strip to 5 1/2-inch marks at either end of the board and bending it downward to touch a 1 1/2-inch mark at the mid-point of the strong back. Once again, I used a pencil to draw the curve onto the board and a jig saw to cut it out. For aesthetics, I cut off the ends of the lower member at 20-degree downward angles, which left the upper member about two inches longer at either end.

I made three rafters, also from two-by-six-inch treated material, each 35 inches long and 2 3/4 inches wide, with a five inch wide flat surface at the top that tapers to one inch at either end. The rafters are joined to the top strong back by cutting dado joints one-half of the way through the centre of each rafter and  making three similar cuts in the top edge of the strong back, allowing the rafters to sit flush with the strong back’s top edge. I used brass screws to fasten two 2 1/2-inch by 3/8-inch thick solid cedar boards face down to the five inch flat surface on each of the rafters. The centre roof boards are about 130 inches long, with the ends cut to form a point from which the rest of the boards flow down the rafters in diminishing lengths to create a curve. All the roof boards are 3/8-by-12-inch T&G cedar fastened to the rafters with brass screws; the cedar and screws can be purchased from big box lumber stores. I left a three-quarter-inch overhang at the eaves to hide the ends of the rafters. To strengthen the top of the roof, I screwed a one-by-four-inch solid cedar board face down to cover the join between the two ridge boards. When the roof was completed, I made four outside rafters to hold the ends of the roof boards together and to give the rake edges a slight curve. I also screwed a three-quarter-inch thick by 10 3/4-inch wide and 30-inch long solid cedar placard to the front and back side of the gate to tie together the mortised horizontal beam and the two strong backs. Traditional Torii gates have a Japanese symbol painted on the placards, denoting such things as peace, love or heaven.

I anchored the four legs and two uprights into the ground by digging down about a foot and packing around the posts with three-quarters-inch down.

People always comment on the beauty of our Torii gate when they enter our yard. My wife has placed fret sawn swallow figures on both placards, as well as drawn symbols on them in black calligraphy.